Unlike many other flashy games, Rayman 2's excellence extends to its relentlessly inventive gameplay.

Rayman 2 is a colorful 3D platform game. It contains no extreme violence, no geysers of blood, no official license from Smith & Wesson, and no foul language - in short, it's not what currently passes for "mature" and "edgy" in interactive entertainment. It could be easily dismissed as a simple game directed at children, except that it also happens to be one of the best games of the year.

Rayman 2's concept is not particularly original. The game takes its basic framework from popular console platform games such as Super Mario 64. You explore a series of connected environments collecting objects (glowing stars called Lums), learning new skills, and returning to previously visited areas to re-explore them and dig out secrets you may have missed the first time through. The underlying purpose behind all of this activity is the hunt for several rarer objects, in this case four magical masks that can release a creature called the Polokus, who will rid Rayman's world of the evil Admiral Razorbeard and his robotic pirate invasion force. Within this familiar structure, Rayman 2 displays an exuberant ingenuity and technical excellence that make it significantly more than just another Mario clone.

The original Rayman featured rich colors and an attention to visual detail that set it apart from its competition in the 2D side-scrolling platform genre. Rayman 2 takes the same lush aesthetic and successfully transforms it into a seamless 3D world. While the game's geometry is not particularly complex, each of its levels is expansive and beautiful thanks to amazing textures and vibrant lighting. You'll travel from verdant forests to the shores of vast glowing oceans, and from flying pirate ships to moonlit bridges. Due to the game's consistently unique artwork, each of these environments, while not at all realistic, is utterly convincing as a real place within Rayman's world. It would be a pleasure to simply walk around Rayman's levels, even without the underlying imperative of the game itself driving you forward - a sure indication of a great design.

The game's character models have a lot in common with its levels. They're highly stylized and geometrically simple but succeed by being well animated and exceptionally expressive. Rayman 2's characters even perform some effective physical humor, which is a rare occurrence in games. There are moments of real wit in Rayman 2, created almost exclusively through the character animations.

The music and sound effects are also excellent. The character voices are especially noteworthy; all of the creatures speak in a fantasy language accompanied by English subtitles. Each type of creature has a distinct sound to its dialect. For instance, Rayman's helper Murfy - a cross between the Cheshire Cat and a flying frog - speaks in an urgent indecipherable whisper that belies his huge grin and is both more effectively disturbing and genuinely weird than anything in all 70 hours of Shadowman.Unlike many other flashy games, Rayman 2's excellence extends to its relentlessly inventive gameplay. The developers have included a huge number of different play styles, and almost every one feels both solid and complete enough to be the entire basis for its own game. A few are trotted out just once, never to return, though you won't miss them since there's always some new activity around the next corner. These are just a few of the exploits in store: Waterskiing behind a river snake, taming then mounting a living, two-legged mortar shell like a bucking bronco, rafting down a river of lava on a giant berry, and flying an exploding barrel of black powder.

Rayman 2 has 40 long levels full of constant and challenging surprises. Each one contains plenty of secrets and can be completed entirely to unlock a unique, level-specific bonus area, which adds some nontrivial replay value. The game's difficulty level is not selectable, but Rayman 2 does a good job of acclimating you to the basic skills during its first half before removing the training wheels and forcing you to combine your mastered techniques in the series of increasingly complex boards that compose its second act.

A good eight-button gamepad is almost a necessity to enjoy Rayman 2. Attempting to simultaneously move, jump, strafe, shoot, and control the camera with the keyboard would probably suck the fun right out of the game for most players. Unfortunately, Rayman 2 doesn't include a way to remap controller buttons, which is a bad choice in a game obviously designed to be played with a gamepad. The only other frustrating aspect of Rayman 2 is its save system. Each level is accessed through a central hub area. You can only permanently save your progress when exiting a level and returning to the hub. However, within a level there are multiple "soft" save points where you can restart if you die as many times as you want as long as you don't quit the game. Why the developers chose not to let you save the game permanently at these points is a mystery.

Minor complaints aside, Rayman 2 is a great game that takes a shopworn genre and infuses it with so much style and conspicuous creativity that it becomes new again. It's whimsical in the best possible sense, fun to play, and easy on the eyes. It makes competing games with more "mature" themes seem downright offensive by comparison, not for the iniquity of their content, but simply for their relative lack of invention. 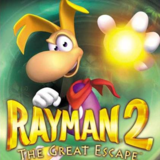