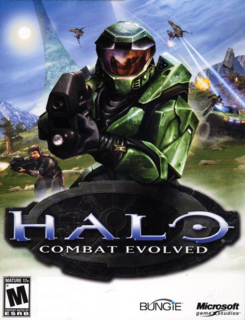 9.7
Superb Check out the review

Mostly, this is as close to flawless science fiction shooters can get, even if sometimes Halo is sometimes quite dull.

User Rating: 9.4 | Halo (Xbox Collection) XBOX
By stevenscott14 | Review Date: January 29, 2006
Well, well, well. Here I am, reviewing yet another game while wondering what has become of my life. And the game is Halo: Combat Evolved, without a doubt the overall favourite Xbox game of all time. And, yes, it's a launch game, and not often do console launches spew up something so special as this. Halo is a golden example of its genre; a well-balanced, epic shooter with a great narrative and good enemy AI, and while doing all those things it covers itself in the kind of sheen that's rarely seen, a pure and simple poke in the eye to the PS2 and a premiere for what sort of things we would [and did] come to expect from the Xbox.

Halo is a science-fiction shooter that starts off in the reaches of space, where a ship The Pillar Of Autumn is the midst of escaping from some alien fortress [or at least that's what I gather, people who have read the books should know] and the last hope for the human race is onboard - a genetically enhanced warlord, a fearless messiah, a battlefront god. His name is Spartan 117, more commonly known as the slightly stupid Master Chief, and it's this wonderfully honed warrior who you take control of throughout the game, guiding him through this huge war between humanity and the Covenant. The Covenant are a gigantic fellowship of alien races who are hell-bent on destroying every last human, and are intent of plunging humanity into inexistance. Again, I'm not sure why, but people who have read the books might now.

And inevitably this Pillar of Autumn is invaded by the aliens, and Master Chief is awoken from his cryogenic stupor and shaken out of his frozen tube to join the hordes of marines fighting the Covenant off. Even if it sounds dull and uninteresting, this is in fact one of the best beginnings to a shooter I've ever seen - right from the start it's clear that the humans are putting up a determined fight but are gradually whittling out their numbers. That's where you come in, fighting through the ship with some scattered plasma rifles and pistols, dodging Covenant plasma grenades and smacking them with the butt of your rifles.

It's hard to explain what makes the actual gameplay engine of Halo so damn good. It's not as fast-paced as other FPS games, actually it's quite tactical sometimes, even though you can never issue orders to what fellow marines you have... it must be the balance of the gameplay. Everything's so perfect in this game, or maybe it's just the sheer electricity of the combat and ferocity of the battles. Part of the enjoyment goes down to the weapons, there are some really good guns in this game, from the meaty and precise assault rifle to the potent pistol. You can also pick up any weapon you find lying on the ground, whether alien or human, and you can use any a close-range melee weapon by smacking Covenant upside the head. All these elements really deliver you into the heat of battle, and, more importantly, makes you feel like the saviour you really are; a methodical warlord.

There is also a sense of scale in Halo that PS2 would splutter to recreate, but that the Xbox doesn't even sweat at creating. As soon as the second mission kicks in you're given the freedom to go wherever you want within the level; it's very open-ended. Plus you can drive vehicles around the area, running over the Covenant and piling marines into the passenger seat and gunner seat. Vehicle control is at first bewildering, but once you get used to it you'll find the vehicles are actually very easy to maneuvre, through tight corners and in between gaps, even over the occasional slope and off again. And again, you can get in whatever vehicle you see, provided there's not a driver already. Alien ones are again drivable, but watch there's not an Elite sitting in the seat unless you want to get splattered.

Some of the most epic skirmishes in gaming history are present in Halo; gigantic science fiction scraps between the two heated factions, where bullets and plasma fire spray everywhere in sight and vehicles go flying everywhere, guided by their desperate and reckless drivers. A great many of these battles will give you a wave of goosebumps by just how bloody inspiring they are... I've found shivers going up my spine as I fly the Covenant Banshee low over the snow-covered battlefield as Covenant tanks lob bombs at a platoon of marines taking cover behind rocks and firing at Grunts... Halo is just so damn memorable and one of the greatest experiences in gaming.

Unfortunately, some of the campaign missions are boring, repetitive slogs. The Library is perhaps one of the worst exercises in FPS history, at least an hour of shooting endlessly spawning Flood enemies and following an equally irritating airborne database. And it's not much fun to do one mission and then finding out a later one is set in exactly the same place, albeit with stronger, more experienced enemies - at least twice the amount of them as well.

But of course, Halo shown off everything the Xbox could do at that fateful launch could do, and I, like many others, think that without this astonishing visual masterpiece the Xbox would have failed like the Saturn and Dreamcast before it. The sense of scale is often enough to drop your jaw in amazement. The character models are extraordinary, from the detailed Master Chief model to the armour-plated marines, to the fearsome looking Hunters to the strange and cowardly Grunts. Environments reach similar greatness, but they are often recycled for a later mission - I know this is relative to the plotline, but still I want more variety in the levels. General effects from explosions to gunfire to vehicle skidding are all well done and add that little bit more to an already atmospheric game.

And even after all that work put into other areas of this classic, I think the audio is Halo's high point. Right from the swooping orchestral music to the haunting choir at the beginning, the music is absolutely top-notch and deserves a place on everyone's Windows Media Player in the entire world. The sounds of explosions and gunfire are great, they're enough to give your ears temporary deafness through surround sound. And then the story is expertly told through some excellent voice-over work. The standout voice work is definitely Cortana, she delivers her part with style and edge, pouring her information into your mind.

The multiplayer in Halo is also very good, with a horde of game modes, and the option to customize them in your own way. It's quite a feeling to team up with 7 mates on System Link and beat the hell out of another 7 on the superbly designed maps, from the open-ended snow map Sidewinder to the sniping playground of Beaver Creek. Another highlight is the huge desert map Blood Gulch, which is a vehicle-focused map surrounded by mountains and enclosed by peaks. Some of the best multiplayer maps on Xbox were here until Halo 2 completely blown us away with its biblical online mode and godly multiplayer maps.

Halo: Combat Evolved is such a memorable game you simply can't describe it in just 500 words. You need a lot more than that to truly put into words, and I hope that's exactly what I've done. It's such an epic, memorable experience it's hard to explain, and it's no wonder after the single-player tour-de-force shown here, people were inexplicably disappointed in the anticlimactic spiral that is conveyed in the slight letdown called Halo 2. Sometimes Halo is a little bit tedious and drawn-out, but mostly, this is as close to flawless as science-fiction shooters can get.
Load Comments (0)