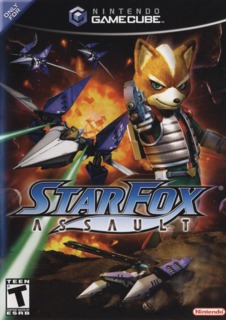 Turn your Felyne into Fox McCloud! Report for duty in Monster Hunter Generations with this free Star Fox DLC costume!

Is Star Fox: Assault the game that Star Fox fans have been eagerly waiting for all these years? Watch Alex Navarro's review to find out.

Team Star Fox arrives in the nick of time in this cutscene.

A trusty gun is Fox's best friend on the ground.

Fox isn't able to save Krystal in his Landmaster, but he sure can run over some bad guys.

Watch the introduction cinematic from the game.

Alex Palomares takes you on a guided tour to Nintendo's Booth on the E3 2004 show floor.

Be sure to check out the full Nintendo E3 2004 press conference shown in all its glory and in direct-feed.

Check out some awesome footage of Star Fox from Nintendo's E3 2004 Press Conference.

The GameCube is shut out of the console top 20 as Gran Turismo 4 retains pole position; Sims 2, WOW top PC charts.

A boxed copy of Namco's new Star Fox shooter is in our hands, and we've taken to the skies with it. Impressions inside.

Japanese game giant's winter and spring lineup offers no surprises, save a for a dearth of DS follow-up titles.

Company rep suggests that Star Fox and Donkey Kong Jungle Beat may see a Japanese release before the end of 2004.

Fox McCloud is back, and this time he didn't forget his arwing fighter.

Team Star Fox is back for more intense combat as they engage a new threat by air and by land. A few years after disaster was barely averted on Dinosaur Planet, Lylat Central Command gets wind of a new threat spreading throughout the solar system.