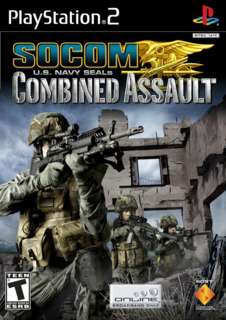 Get to the extraction point before it's too late.

Watch your back as you make your way down a treacherous ravine.

One shot, one kill!

Check out some footage of SOCOM: Combined Assault from the E3 2006 show floor.

Check out some footage of SOCOM: Combined Assault from the E3 2006 show floor.

A season's worth of gaming arrives in a single week as the 360 gets its long-awaited shooter, Activision sends out first games for Sony's next-gen system, and a slew of ...

Sony stops by the GameSpot office to give us a sneak peek at a demo version of its upcoming tactical shooter.

We buddy up with some random strangers on the show floor to try out the four-player co-op mode in SOCOM U.S. Navy SEALs Combined Assault for the PlayStation 2.

Source: A quickly pulled product page on EBgames.com. The official story: "As of today, we have not made any announcements for future SOCOM franchise products."--Sony Computer Entertainment America spokesperson. What ...

Defend freedom once more in this latest entry in the SOCOM series, which features new weapons and vehicles for single player and co-op modes, as well as connectivity and story arc with the PSP SOCOM game Fireteam Bravo 2.