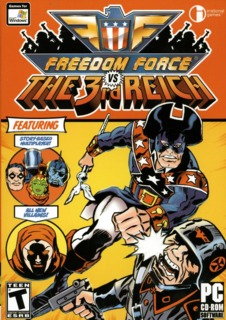 Latest on Freedom Force vs The 3rd Reich

A superhero uses his head to take out dangerous foes.

2K Boston's 'next big project' is a 'shooter'

Original BioShock studio hiring veteran designers to work on "unannounced" action title; is it an X-COM spin-off, a SWAT sequel, or something else entirely?

Irreverent head of recently purchased developer sounds off on the deal, BioShock, VUG, and the future.

So You Wanna Be a Game Designer

GameSpot talks with four prominent game designers about what it takes to do their jobs, and how to get involved in game design.

"Everything is Possible": Inside the Minds of Gaming's Master Storytellers

Five of gaming's greatest storytellers share their thoughts on their industry, their work, and their medium of choice.

KOTOR creator joins SWAT 4 studio as a comarketer of Freedom Force vs. The Third Reich.

Find out about the all-new multiplayer modes in the next Freedom Force game from Irrational Games general manager and creative director Ken Levine.

Superhero RPG for the PC returns for battle; game lands in stores March 8.

We get our hands on a small part of an early version of this upcoming superhero sequel. Get hands-on details here.

The new adventures of the superheroes known as the Freedom Force will involve time travel, gadgeteers, and at least three different kinds of punching. Get the details here.

The "Calling All Heroes!" contest challenges fans to design a character for the upcoming Freedom Force vs. The Third Reich.

Game giant will distribute the PC RPG Freedom Force vs. the Third Reich, which is now set for an early 2005 release.

We take an up-close look at the next Freedom Force game from Irrational at E3 2004.

Irrational Games announces the sequel to its outstanding 2002 superhero game. Get the first details here.

Freedom Force goes back in time to the battlefields of World War II to track down an evil enemy. This new chapter in the Freedom Force universe lets you play as one of six heroes from the comic book series as they battle superpowered German forces.

8.3
Sign In to rate Freedom Force vs The 3rd Reich