A great story and a wonderful cast of characters are the highlights of this game, which anyone with an appreciation for comic books would probably love.

The original Freedom Force succeeded against all odds when it was released three years ago. For years prior, the possibility of a superhero-themed computer role-playing game was nothing more than a popular pipe dream. But Freedom Force made good on the promising concept. It delivered great tactical combat to rival most any other RPG available of the time, and it captured the style and spirit of classic silver-age comic books remarkably well. A surprisingly endearing cast of characters and an altogether excellent story rounded out a memorable, satisfying game. And now, at long last, Freedom Force has a follow-up in the amazingly titled Freedom Force vs. The Third Reich. The new game is a direct continuation of its predecessor and really isn't much different in terms of the presentation or the nuts and bolts of the action. So it serves as a testament to the quality of the original that the new Freedom Force, despite being so similar to a three-year-old game, is just about as fresh and as fun as the first. A great story and a wonderful cast of characters are once again the highlights of this game, which anyone with an appreciation for comic books would probably love.

Freedom Force vs. The Third Reich features a good-sized story-driven campaign consisting of a linear series of missions, and this single-player experience is definitely the highlight. It opens with a brief animated summary of what happened in the original storyline, which serves as a good reminder for returning fans and a suitable primer for new Freedom Force players (who'd ideally be better off playing through the first game before going into this one). The whole campaign is structured like a comic book series, complete with authentic-looking comic book covers for each "issue" of the story. The game never breaks tone, which is an important accomplishment. From the opening cutscene to the final roll of the credits, you'll be immersed in the game's playfully mind-boggling storyline, which features the cast of the original Freedom Force in addition to some likable new heroes and villains. On top of that, the large cast of characters to choose from, the open-ended combat system, and multiple difficulty settings give the campaign solid replay value. It's not very difficult to fight through at the default setting, though this is partly because of how well Freedom Force pulls off the superhero thing. These characters are and should be powerful and difficult to knock out.

Besides the campaign, there's a single-player skirmish mode in which you can take on waves of different foes in a variety of different environments. There's also a four-player multiplayer mode (playable both on a LAN and online), featuring several different game types, each allowing you to pit your small squads of superheroes against those of opposing players. It's possible to play relatively balanced matches to test your skills, or you can have at it in a complete free-for-all. Either way, the skirmish and multiplayer portions of Freedom Force help add some lasting value, though the context given by the story in the game's campaign makes the action there inherently more appealing. Still, the possibility to fielding your own superhero creations against live opponents can be pretty appealing as well.

One of the most touted features of the original Freedom Force was the ability to create your own superheroes (and their various superpowers), and of course this is present in the new game. But since there are so many great premade heroes already available to choose from, there's no need to pad their ranks with your own creations unless you're compelled to for some reason. The possibility of bringing your own custom-made superheroes into the campaign is a theoretically exciting idea here much like it was in the original. However, you'd be hard pressed to come up with characters better than what developer Irrational Games has already provided for you.

The incredible thing about Freedom Force is that this cast of characters is so good that it in some ways rivals the classics to which the game pays homage. Though the game superficially resembles a parody of old comic books, it exhibits the same fun-loving, anything-goes spirit and sincere, serious storytelling that was the hallmark of the classics. Freedom Force vs. The Third Reich's new story and characters tie in nicely with what's already been established, and the new golden age-style characters (more human than superhuman) make for a nice, subtle contrast both in terms of story and gameplay. Ultimately, the new campaign provides an experience that's similar to the first, above and beyond superficial resemblances. Fans will once again probably wish that the game could have spent even more time elaborating on some of the relationships between the different characters or going into a lot more detail about the many characters that make only brief appearances in the story.

The gameplay of Freedom Force is simple and fun. The first few missions explain all the basics of what's going on and give you plenty of practice with the controls and using your characters' different powers. Since you'll control no more than four superheroes per mission, the action never gets overwhelming; instead you're able to focus on micromanaging your mighty squad's abilities. Some enhancements to the mouse-driven interface and friendly artificial intelligence help make this sequel somewhat more intuitive to play than its predecessor, but there was already a very strong interface and combat system in place. It's still as exciting as ever to do such things as pick up and throw cars at your foes, knock down entire buildings as you fight, and smack thugs around far and wide. The game lets you pause the action (or slow it down, alternatively) whenever you want. But you'll definitely spend more time executing different attacks and watching as they pan out instead of just sitting there staring at a static screen and wondering how to proceed. Overall, the combat system is easy to get into, but it's quite deep, meaning that characters can have dramatically different abilities, strengths, and weaknesses.

You'll face a variety of different, new enemies. Goose-stepping, semi-incompetent Nazi stormtroopers, floating brain things, and killer gorilla experiments are just some of the fodder you can look forward to beating up on. These aren't necessarily intended to be the shrewdest of foes, but their AI is still noticeably lacking in some cases, as you'll sometimes be able to mosey right on up to your enemies without them so much as noticing. Nevertheless, once triggered, your foes will use a variety of different attacks to try to stop you. Managing your forces' powers and positioning while keeping a sharp eye out for health power-ups tends to be the order of the day.

Apart from the action RPG-style gameplay, the only real role-playing elements come in the form of the character-customization system. Characters gain experience points between missions and you can buy new abilities or upgrade existing ones with these points. It's a good system that lets you make meaningful decisions without miring you down in too much minutia. You can also slightly influence the story depending on which characters you bring into a mission. But, in the spirit of telling you a good story, the game doesn't ever prompt you to make decisions or otherwise take part in an open-ended gaming experience like you'd get from a more-traditional computer RPG.

Though Freedom Force vs. The Third Reich recycles a lot of the same graphics from the first game, it includes a whole bunch of new environments for you to explore, fight in, and accidentally (accidentally!) destroy. From communist-controlled Cuba to the heart of the German war machine in World War II, you'll get to see plenty of larger-than-life locations that can be torn down piece by piece if you so choose. A number of the game's missions are races against time or other such endurance tests, which help break up the action while adding some suspense. The game doesn't get frustrating, though, thanks partly to the ability to quickly save your progress at any time.

Freedom Force's visuals have held up surprisingly well for this installment, thanks largely to the game's cohesive art style and a variety of new bells and whistles. It's too bad that the close-ups of the characters talking aren't lip-synched during the game's numerous dialogue sequences, though. It also would have been nice if the 3D characters you'll see during missions better resembled the hand-drawn counterparts you'll see during the game's entertaining storyboard-style cutscenes. However, the animation, realistic physics, and colorful look still shine through, making for a great-looking game overall. The cutscenes and other little presentational frills enrich the entire experience.

The audio contributes even more heavily to establishing the game's mood and tone. The same talented voice actors who gave their characters so much personality in the first Freedom Force reprise their roles here, and they once again deliver their lines with the sort of unfaltering conviction you'd hope for. As well, the dialogue itself is sharply written, packing in plenty of amusing one-liners and witty banter, while almost never stooping to using irony to poke fun at what's going on. Meanwhile, a rousing musical score blares during many of the missions, and the sound effects, which are unchanged, still complement the action and fit perfectly. Some of the characters' speech repeats a bit too often during gameplay, but overall, it's difficult to fault Freedom Force's audio on any level since it's so key to what makes the game as likable as it is.

Freedom Force vs. The Third Reich is absolutely worth playing if only for the story. Fortunately, the action itself is plenty entertaining, too, and there's lots of it. And while the game's technical aspects haven't been radically revised since the original, they've aged almost as gracefully as the comic books that inspired it. This is all great news for Freedom Force fans, whose ranks probably consist of the vast majority of people who played that game. Yet, possibly the best news of all is that the satisfying conclusion of this second Freedom Force installment suggests that there will still be more where this came from. 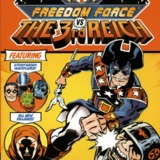 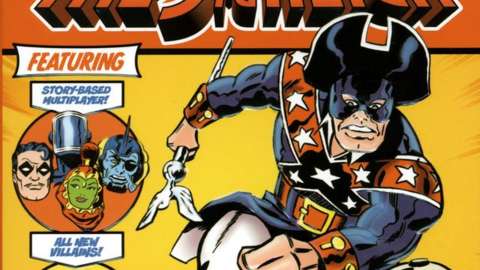 Freedom Force goes back in time to the battlefields of World War II to track down an evil enemy. This new chapter in the Freedom Force universe lets you play as one of six heroes from the comic book series as they battle superpowered German forces.

8.3
Sign In to rate Freedom Force vs The 3rd Reich