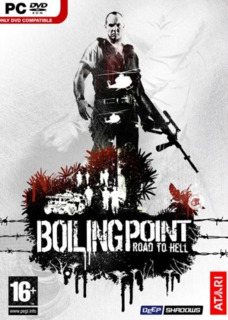 We sit down to take a look at this upcoming hybrid game that will combine the exploration elements of a role-playing game with the action of a shooter.

In this clip a helicopter makes an emergency landing.

Watch this tank make its way to an enemy encampment.

Travel the jungle looking for the Indian's camp.

The programmers behind GSC's Codename: Outbreak form a new development studio and begin work on a 3D action-adventure game.

The team that created Codename: Outbreak is now working on a 3D action role-playing game.

Executive producer Peter Wyse explains what to expect from this upcoming game that will feature a huge, seamless world.

Deep Shadows talks about its upcoming 3D action RPG set in Colombia and the lessons it learned in creating Codename: Outbreak. New screens inside.

Russobit-M Company announces that it will publish Deep Shadows' forthcoming action RPG in Russia, the rest of the Commonwealth of Independent States, and Eastern Europe. New screens inside.

Set in the hot South American jungle, Boiling Point: Road to Hell puts you in the role of Saul Mayers--a decorated soldier on a mission to protect his daughter from harm. As you delve deeper into the dangerous environment, you'll find useful vehicles (such as taxis, helicopters, and boats), weapons, and equipment.

7.2
Sign In to rate Boiling Point: Road to Hell

Mature
Blood and Gore, Language, Sexual Themes, Use of Drugs and Alcohol, Violence