Executive producer Peter Wyse explains what to expect from this upcoming game that will feature a huge, seamless world.

Your typical first-person shooter on the PC usually involves playing the game from a first-person perspective, lots of guns, some explosions, and online play for more guns and more explosions in multiplayer. Boiling Point from developer Deep Shadows and Atari will instead present you with a huge playing field that encompasses an area of 25 square kilometers full of hostile soldiers and drivable vehicles. The game will involve much hacking and slashing through the jungle, but it will also involve many role-playing elements--you'll have to deal with different political factions in power while watching your back for any stray bullets. Atari executive producer Peter Wyse explains.

GameSpot: Give us an overview of the story behind Boiling Point.

Peter Wyse: Boiling Point is set in our own fictional South American country called Realia. Generally speaking, the stereotypical instability of certain South American nations in terms of social and political structures make this a perfect locale for the game's constantly shifting allegiances and varied mission structure. Plus hacking your way through the jungle and fighting off animals is fun.

GS: Give us an overview of the gameplay in Boiling Point. We know that the game will primarily be a first-person shooter, but since the story behind the game is also about investigating the disappearance of the main character's sister, what other elements can we expect--character dialogues, quests, racing?

PW: The game is really part shooter and part role-playing game. As a character, you start off with neutral relationships with all of the game's factions including the CIA, local guerrillas, bandits, the Realia government, native cultures, and, of course, the mafia. All of your actions in the world, including your success or failure in a given mission, affect your relationship with each faction. There are very deep character dialogue trees--you can interact with every character in the game to learn more about the locales and the interaction between factions.

GS: We know that Boiling Point will have many different vehicles, like cars, helicopters, and tanks. How many vehicles are planned for the game in all? What role will they play in the game?

PW: Vehicles are vital to navigating the world of Realia. There are 26 vehicles in the game which can be bought and sold--and stolen. Vehicles play an integral part in many of the missions and are not just limited to cars and trucks. Besides helicopters, tanks, and cars, there are also boats and planes. Not only are vehicles critical to missions in particular, but since the game is open-ended, if you'd like to do some sightseeing within 25 square kilometers of the gameworld, a vehicle can really come in handy.

GS: Tell us about the seamless world in Boiling Point. What will it add to the game?

PW: Having a large, persistent world has the same effect on gameplay that it does in Grand Theft Auto. It adds a level of constant immersion for the player, as the game never stops and never loads. The world is big enough that the flying vehicles still have plenty of room to operate without reaching the edges of the environment. Overall, this is probably the most impressive technical feature of the game, and it really defines the action and gameplay.

GS: Tell us about the different environments that players will explore in Boiling Point--will players always be out in the open exploring the jungle, or will there be urban areas? Guarded military compounds? Jungle rivers and lakes?

PW: Yes to all of the above. There is a huge amount of variety, from thick jungle to waterways to military and guerrilla bases. There are cities with bars and stores. There are airports and bus stations. Pretty much everything you would expect to see represented in an accurate world portrayal is represented in this game.

GS: Tell us about the game's engine and its particular strengths. Aside from the ability to render a huge seamless world, are there other specific features you'd care to share with us in terms of advanced graphics, physics, or anything else?

PW: We really take advantage of all of the great features of DirectX 9.0-plus compatible video cards, including pixel shaders and advanced lighting and particle effects. We have the ability to display a larger number of animated character and vehicles onscreen, leading to some very intense battle scenes. The game is fully scalable graphically to run across a range of PCs.

GS: What plans, if any, are there for multiplayer in Boiling Point? Any specifics on modes or other features you'd like to share?

PW: The multiplayer features have not been confirmed at this point. We will likely release the single-player game and then follow up with a free multiplayer patch after launch.

GS: Finally, is there anything else you'd like to add about Boiling Point?

PW: Boiling Point takes two successful genres--shooter and RPG--and does a really nice job mixing them together so that the gunplay is not the primary focus of the game. It is also very interesting in general to play a shooter in a huge, persistent world, which is an original aspect of this title. The great balance of shooter gameplay and RPG elements, such as managing inventory and constantly changing relationships, is done very successfully and makes for a shooter with much more depth than what gamers traditionally expect. 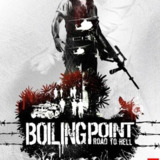