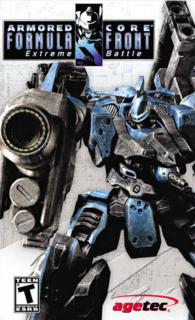 Take a look at some incredible outdoor firefight in this movie.

Check out an awesome battle in this clip.

Take a look at the intro movie to Armored Core: Formula Front.

Take a look at some awesome footage of AC Formula Front for the PSP.

Agetec serves up some mech action on the PSP.

The PSP revealed: shedding light on gamers' most common questions

We get into a fight with From Software's upcoming mech-combat game for the PSP.

Agetec delivers the popular Armored Core series to the PSP. In this special edition for US gamers, Agetec has completely revamped the title with added features from its Japanese counterpart. Armored Core: Formula Front - Special Edition has everything the fans love from the Armored Core series plus more, such as, artificial intelligence (AI) designing and wireless head-to-head action.