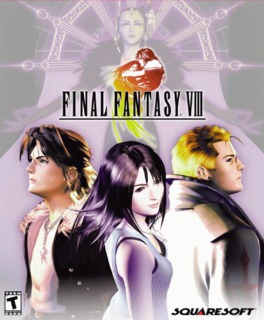 The Square/Complacency Theory of Rinoa

*SPOILER WARNING* I have a new Final Fantasy 8 plot theory. I have named it the Square-Complacency Theory of Rinoa as a parody of Sir Bahamut's "Ultimecia/Time Theory" and "The New Theory of Rinoa". I have already read the theories about Ultimecia's identity and time compression etc. and it seems like most of them are reading into the game WAY too much. I suggest that the plot was poorly conceived and executed, making it the most shallow and most poorly-executed Square RPG to ever exist. The (failed) nostalgic graphics of Final Fantasy 9 are also evidence of Square's complacency between making their best games FF4-FF7, and the piece of garbage which is FF9. Time constraints led FF8 to have great visuals but not communicate anything meaningful, and even the meaningful things Square tried to communicate most people didn't get. I. The German Scientist Who Knows Everything Q: Who on earth is the scientist with the German accent, and how does he know to tell you that Ultimecia is a sorceress from the future and that she's possessing the current
sorceresses? A: He shouldn't. This event is a blatant plot device.

II. Laguna, Dead-Beat Dad Q: If Laguna is Squall's father, why did Laguna leave Raine and become president of Esthar? A: Because he is a dead-beat dad. Very simple. He doesn't return to Winhill or even inform is wife (who later dies) what has happened. Then his kids (Squall and Ellone) are sent to an orphanage. Dead-beat dad.

III. Squall, a Freudian Field Day Q: Why is Squall, the hero, a complacent introvert? A: Because the folks at Square were tired, bored and complacent--Squall was probably a reflection on themselves. They made a lot of games; Final Fantasy VII was hard to top and was emotionally exhausting to make. In any case, Squall would be a field day for Freud, given his insecurities and the fact that his sister was taken from him at a young age (after his mother died, after his father abandoned them) and he was left alone, and that now he is a complacent introvert who does what he's told (but then he becomes leader of Galbadia Garden because apparently, he's really smart and a good leader too [good save Square]).

IV. A Failed Political Statement Q: What is the conflict with Galbadia about? A: Nothing. It is a meaningless war that Ultimecia manipulates to get Ellone--hence mass confusion of fans about the meaning of the conflict, and hence the conclusion that the game was poorly executed. The only other possible reason is to make a political statement (i.e. Squall says--to himself as usual--that war isn't about good and bad, it is about two conflicting viewpoints; also, the same people killing each other in war were in the same orphanage where they grew up together as kids) which they obviously didn't succeed in communicating since you didn't get it.

V. Ultimecia's Identity Q: Who is Ultimecia? A: Ultimecia is the future Rinoa because: 1. Rinoa is a bitter daughter of a military commander (notice that she's an anti-war activist and her father is in the military). 2. "Ultimecia" in the original Japanese is closer to Artemisia (Ultimecia is actually Artemisa in the Spanish FF8)--a Greek historical figure known for her extreme grief at her husband's death, and who created a huge monument (The Mausoleum, one of the seven wonders of the world) in honor of her husband--notice that Ultimecia/Artemisia's castle is built on the orphanage in the far future. Note that it was transliterated Ultimecia instead of being translated, showing that Square was more interested in creating a catchy name than preserving the meaning. 3. As Ultimecia/Artemisia dies, she tells Squall's team "hold on to your childhood," because "no matter how hard you try, it escapes you." 4. The beginning FMV has (possessed) Edea in a room with white feathers and then ends with Rinoa coming out of a cloud of black feathers to hug Squall (Ultimecia/Artemisia usually has Black wings and Rinoa usually has white wings). 5. She has Griever (or the creature named whatever you named the ring that you gave Rinoa at the beginning of the game) and introduces Griever by saying, "What is the greatest power you know...? (...) Now face that power!" (or in the Spanish translation of the Japanese, "The one you fear most")--she knows Squall's connection and thoughts on Griever. Of course, this could be just one of the ways the the game doesn't make sense ("oops!"). 6. The ending FMV has Ultimecia's face flashing in front of Rinoa's during the dance (not to mention that in this compressed time that Ultimecia created, the dance with Squall is happening over and over again). Then, at the moment that Ultimecia/Artemisia is ready to die and pass on her powers to Edea, we see an image of Rinoa's helmet exploding in space, symbolizing RINOA's death when ULTIMECIA/ARTEMISIA dies. 7. Rinoa absorbed both Edea's and Adel's power, and Adel was the most powerful and evil sorceress to ever exist, and her power even transformed her appearance, which is why Rinoa looks different when she becomes Artemisia/Ultimecia (also, Adel has wings).

Q: If Ultimecia/Artemisia is Rinoa, why does she immediately want to kill SeeDs when she sees them (insert other incongruities here)? A: Because:
1. She is crazy 2. She wants to execute her plan to be with the "past"-version of Squall forever 3. There was probably confusion about the game's deeper meanings between the original writer Kazushige Nojima and the creators at Square.

VI. Time Compression Q: Why does Ultimecia want to compress time? A: Because the writer is saying that women are evil. Despite the fact that only she could exist in such a universe (a fact which the game states), apparently the game is suggesting that the only reason for creating Time Compression is to have control. The only other explanation is to see Squall again and keep time from passing (Rinoa says "I wish this moment could last forever" and Rinoa becomes Artemisia/Ultimecia)

VII. The Lunar Cry (where all those monsters come from the moon every so many years) Q: What does the Lunar Cry have to do
with the game? A: Nothing. It is an excuse for the monsters to get harder. Otherwise it makes no sense to make the random encounters more annoyingly hard even when you go back to an old area. It just so happens that you have to go to space around that time, and maybe the creators thought it would be a good way to make the space voyage more interesting if the two events were at the same time.

VIII. The Sorceress-Knight Story Q: I thought there were supposed to be other sorceresses--where are they? A: There aren't any others--there wasn't time to write them in. There were only two lines, the Edea-Rinoa line, and the Adel line, which merged with it (as Adel is holding Rinoa to pass on the sorceress powers). Square had enough of a hard time creating its first high-polygon 3D game already. Conclusions as to the game's actual meaning given my theory (I'm not saying these are points I believe, I'm just saying that this is what the writers believe):
1. Women are evil (because they become like their mothers, symbolized by passing down sorceress powers). 2. No matter what you do, you're just postponing the inevitable doom of mankind (symbolized by Artemisia succeeding in passing down her powers to Edea). 3. German scientists are smart and know everything, even things that haven't happened yet--or, plot devices are great when you've painted yourself into a corner and there's no time to write yourself out, and if a scientist with a German accent says it, players will believe it. 4. A man will eventually be some lucky woman's knight in shining armor, a woman will eventually become an evil sorceress (i.e. ex-wife), and both their lives will consist of dwelling on the past and self-pity since shallow romance is the only good thing in life. 5. War, what is it good for? Absolutely nothing. (of course, you have to read into the game fairly deeply to even make a conclusion like that) 6. If you add enough incongruous facts to a game's plot, people will believe it makes sense and is brilliant, even if the game plays like a stark and overly-drawn-out silent movie and has relatively few locales or characters.