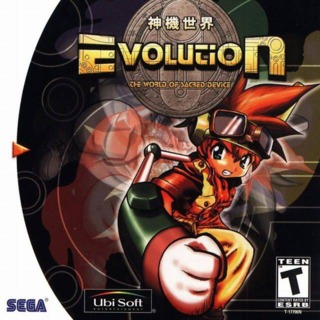 You actully playing a prototype version and it wasn't made for KIDS!

User Rating: 6 | Shinkisekai Evolution DC
By 91210user | Review Date: December 27, 2010
You start playing as a kid who job it is to recover treasure and to sell it. The kid raids dungeons in an effort to recover whatever he's looking for. The game story also has other characters to whom you find yourself in a little town to join your party.

The game is a typical RPG turn based combat game. You run around a dungeon, encountering and beating monsters and earning experience. Once you get strong enough, you encounter the bosses and move on.

Calling the dungeons BORING is an understatement. For a Dreamcast game, you really want to switch the console off, it's that's bad and I wasn't impressed. Even thou the game renders really beautiful textures, you'll be running endlessly in man made walled corridors for up to 20 hours of the game. The look the dungeon look like it was create for the Nintendo 64 or Playstation.

Then during the final 'dungeon', it's set on a detialed ship that began to show off what the Dreamcast was capable off and your party started to get ambushed with awesome ingame cutscenes...if the developers knew how to do this, why wasn't all the 5 'dungeons' like this?

The good news is that the other characters you never selected to join the party automatically level after completing a dungeon so they can jump into your party during the course of the game.

The combat was over done. One new feature the game was a 'move' option, which moves your character forwards or backwards. I never used moved during standard encounters and didn't find a good reason for it. It works extremely well in boss encounters however it had no or little point of the grid system to allow the characters to move. It also effects if you can escape or not and it's really annoying.

For the target market, I have little or no idea to whom this game is aimmed for. With the anime style, the game gets to a point where it's challenge was intended for the mature auidence, it makes you wonder why there a heavy presence of anime artwork that aimmed directly had kids. Other then that, the challenge was still bad. I had my laptop on for the entire game watching movies on Youtube, while letting this game run.

When it comes to what else the game does never tells you anything about how to upgrade weapons, allowing characters to join your party and etc. Also other basic elements that made gaming pleasurible have been distorted, with a little more polish, the game could of been eaiser.

Overall, you'll be spending 15 to 20 hours raiding dungeons with little or no story backing it and then an explosion of a story after your 4th dungeon, by the time that happens, it's too late and you feel cheated.

.... and if you're wondering, it got to the point where I reached the final boss and deleted my save file, because of the extremely cheap and overpowered final boss. I watched the ending on Youtube.

I'm sure many of those paid 40 or 50 bucks for it and you wonder what Sting and Ubisoft actully did with the money. I hope they made better games (and from what I've heard Evolution 2 wasn't a better game either). I say this because it a launch title for the Dreamcast, Evolution is clearly rushed with it's flaws and boring dungeons and I suggest buying or playing this title with caution.
Load Comments (0)