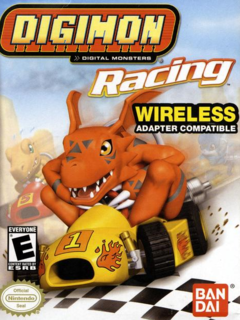 Digimon Racing is a surprisingly fun but strangely familiar game.

User Rating: 7.5 | Digimon Racing GBA
By fngretnman | Review Date: August 28, 2009
When I heard "Digimon Racing" I thought, "Oh brother! The guys at Ban Dai are really scraping the bottom of the barrel this time! They're ruining Digimon!" I initially intended to dismiss the DigiDestined dismal failure as a pathetic attempt at reviving Digimon. Even though I heard from a friend that Digimon Racing was really fun and that I should pick it up, I'd intended to still not get it, but I found it on sale and decided it was worth a shot since this friend hasn't let me down yet on game reviews.
I turned it on, and as I began playing it, I felt as though I'd played it before. Soon, I realized that I was playing Mario Kart for the Gameboy Advance, but instead of Bowser, the dragon I was controlling was Greymon!
True, Digimon Racing has its differences (most noteably, Digivolving characters), but is essentially the same game: a fun beat 'em up style racing game with obstacles thrown in for good measure.
The level layouts and obstacle styles are all essentially the same as Mario Kart and the multiplayer is Mario Kart Digimon-ified. True, it is essentially the same game, but it is very fun. You can't deny that.
Basically, my review is: it's a fun game and every die-hard Digimon fan would love it, but if you already own Mario Kart for the Gameboy Adavnce, it's probably not worth the money.
Load Comments (0)