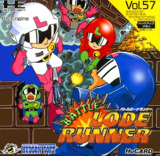 With fun single player, insane multiplayer, and an edit mode; I have no idea how anyone could give this game a 5.0.

User Rating: 9 | Battle Lode Runner TG16
By Maskedgamer1 | Review Date: July 5, 2007
Battle Lode Runner was origionally released only in Japan, but it is now brought to the US as the first downloadable Japan exclusive to hit the Virtual Console. The graphics are typical for the Turbo Grafix, and the music is okay, but the gameplay and overall fun is what makes this game a blast to play. In Puzzle Mode, you take control of a "runner" in a level blocks, ladders, and ropes. The objective is to collect all of the pieces of gold scattered throughout the level, and then climb up a long ladder that appears that brings you out of the level. Also in the level are enemies that follow you around. Your only defense against these enemies is your ability to dig holes. If you dig a hole and an enemy falls into it, the enemy gets stuck in the hole and you can walk over their head freely. These holes close up eventually, and if you are stuck in a hole when it closes up, you die. If an enemy is, they get reborn at the top of the screen. The gameplay is simple, but each level offers it's own puzzles and variaty, so it rarely seems repetitive. There are 101 increasingly difficult levels in the game, which is enough to keep you playing for a long time. There is also an edit mode, where you can create your own 1-player maps, which is pretty fun when you have nothing else to do. Where this game really shines is it's multiplayer mode. Battle Lode Runner supports 5 players, so things are always frantic. The multiplayer in this game kind of resemble bomberman. In Escape Mode, 2-5 human players run around a level avoiding enemies, finding powerups, and trying to trick each other into falling into a hole and dying. After a ceritan time, a piece of gold appears, and some pieces of a ladder appear. The player who gets the gold and the ladder, and then climbs up one of the ladders at the top of the screen wins. In Survival Mode, 5 players, a mix of humans and computer players or all humans, duke it out, trying to avoid being tricked into a hole by another player. At the end some enemies do come, but for most of the battle there are only runners in the level. Items come into play a lot here, and could decide if you win or lose. Tag Mode is the same thing as Survival, except there are always 4 players who seperate themselves into teams of 2 and work together to outsmart their opponent. At first the game is confusing, but you catch on fast. You need a unique taste to like this game, and some people probably won't, but for most people this game is a snag for only 6 bucks.
Load Comments (0)