Battle Lode Runner is good news for anyone hoping to see other Japan exclusives in the North American Virtual Console shop, but that's about it.

Hudson originally published Battle Lode Runner for its PC-Engine console in Japan in 1993, but it never got around to publishing it for the TurboGrafx-16 (the PC-Engine's equivalent in North America) because the company instead decided to throw in the towel and concede the console market to Nintendo and Sega. Incredibly, after 14 years, the TurboGrafx-16 version of Battle Lode Runner has finally been made available in North America—not for the actual TG-16, but as one of the TG-16 games available for purchase in the Wii's Virtual Console shop. While that's a neat point of trivia and good news for anyone hoping to see other Japan exclusives make their way to the Virtual Console, the game itself isn't worth getting excited about. It's still the same ancient computer game that people had played to death by the time the 1980s came to a close, and the extra play modes and updated graphics do nothing to change that fact.

Battle Lode Runner retains the same basic gameplay from the original 1983 computer game. Each mine is a 2D level consisting of multiple floors connected by ladders. You use the directional pad to move your character back and forth on the different floors of the mine and to climb up and down ladders, while the two buttons let you dig away the ground that's immediately to your left or right. Occasionally, you'll unearth a power-up panel that will make you move faster, increase the number of holes you can dig, or give you a random curse. However, the main purpose of digging is to trap enemy monsters and opponents in the holes you create so that you can more easily grab the lodes of gold that are sitting around. The puzzle mode contains 100 different levels, in which the goal is to grab every piece of gold without running into any monsters. Some of the level layouts are challenging, but the act of climbing ladders and digging holes becomes rote and tedious almost from the beginning. You can create your own levels with the built-in puzzle editor, although the same caveats apply. The battle mode is slightly more enjoyable because it lets you compete with as many as four other people in survival-, escape-, and tag-style matches. Unfortunately, two people isn't a sufficient number to get a lively match going. You really need to have three or four people in the room with you to generate a good party vibe. And, even then, the action is so simple that you and your friends will probably lose interest within a half an hour.

The 16-bit graphics and audio in this version of Lode Runner are a huge improvement over the raster lines and beeps from the original computer versions, but they're still weak by 1993 standards. All of the characters and enemies are colorful blobs that vaguely resemble the characters from Hudson's Bomberman games, while the mines are put together with plain brick-and-ladder tiles. Digging and falling are accompanied by terse scraping and popping sounds. There's a lot of different music to hear, at least, and some of it is actually quite catchy. As you'd expect, the Wii has no trouble emulating the game. The standard Wii Remote works great, and you can sync up multiple remotes or plug in multiple GameCube controllers to get battle matches going. Also, the game doesn't look as blurry as some of the other TG-16 games on the Virtual Console, likely because its thick lines and solid colors stand out so well.

Unless you already have a passion for Lode Runner, you probably shouldn't bother spending 600 Wii points ($6) to play the TurboGrafx-16 version of Battle Lode Runner on your Wii. The battle mode is good for a few minutes of fun if you can get a bunch of people together, but the game is otherwise just too simplistic. 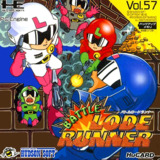