Here's where you can preorder Pokemon Legends Arceus and get its preorder bonus.

Anyone who buys and downloads the game from the Nintendo eShop before May 9, 2022, will also receive a code for 30 in-game Heavy Balls, which have a higher catch rate than regular Poke Balls (though they can't be thrown as far). Both this and the Hisuian Growlithe Kimono Set are obtained via the Mystery Gift feature in Pokemon Legends Arceus.

The only physical Pokemon Legends Arceus preorder bonus so far is available via the Pokemon Center. Preorder there, and you'll also receive the Arceus Sitting Cuties Plush with orders while supplies last. Unfortunately, a photo of what the plush will look like isn't available yet, but the Sword and Shield preorder plushies were pretty cute. We expect other retailer-exclusive bonuses may be announced closer to launch--usually GameStop offers a poster or some other kind of bonus. 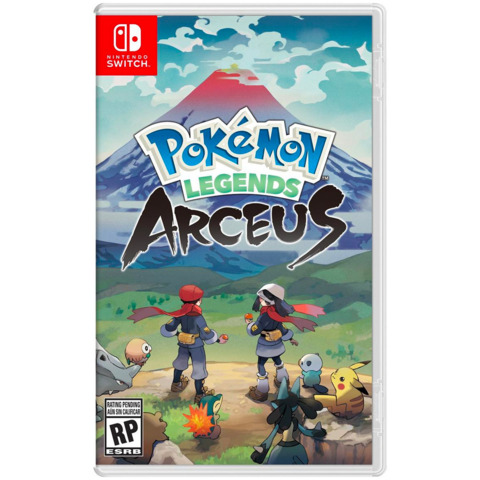 Pokemon Legends Arceus is available to preorder for $60 at major retailers, and digital preorders are open on the Nintendo eShop.

See at Walmart
See at Best Buy
See at GameStop

Pokemon Legends Arceus is set in a much earlier time period than the mainline entries, back when the Sinnoh region was known as Hisui and before modern Pokemon training even existed. Early on in the game, you meet up with a group known as the Galaxy Expedition Team, led by a new Pokemon Professor called Laventon, and take on the task of compiling the Hisui region's first Pokedex. Professor Laventon has brought three Pokemon to Hisui--Rowlet, Cyndaquil, and Oshawott--and you get to choose one of them as your partner Pokemon. From there, you head off on an adventure to survey and catch Pokemon. The legendary Pokemon at the center of the story is, of course, Arceus, who is described as an "Alpha Pokemon."

Pokemon can be caught in one of two ways in Pokemon Legends Arceus. You can track them and lob a Poke Ball, or you can engage in traditional turn-based combat by sending your Pokemon into battle. The latest trailer also showed off aggressive wild Pokemon with glowing red eyes, making them particularly dangerous to encounter out in the wild. You'll also have a variety of ways to explore the Hisui region, using bird-type Pokemon to glide around, water Pokemon to move across water, and four-legged mounts to ride across the land. Check out the full Hisui region trailer below for all the latest details.

Pokemon Legends Arceus isn't the next Pokemon game landing on Switch; it'll be preceded by Pokemon Brilliant Diamond and Shining Pearl, which are releasing a couple of months prior on November 19. The Gen 4 remakes are also set in the Sinnoh region, and they're available for preorder too.