System Shock 3 Might Come To PS4 And Xbox One, Not Just PC

Payday 2 developer Starbreeze signs System Shock 3, will bring it to "PC and other platforms."

The System Shock series started all the way back in 1994, with a sequel to follow in 1999. It's been nearly 18 years since that last release, but another, System Shock 3, is due to come out at some point soon. Now, Payday 2 developer Starbreeze has announced that it has signed a deal with the threequel's developer OtherSide Entertainment--which is headed up by Deus Ex creator Warren Spector--to publish the game and bring it "to PC and other platforms."

"System Shock is one of those iconic franchises in the history of games that still gets my blood going and Mr. Spector is one of the founding fathers of the modern action-RPG" said Bo Andersson-Klint, Starbreeze's CEO. "We're greatly looking forward to bringing System Shock 3 to players worldwide in our collaboration with OtherSide Entertainment and Warren Spector's team. I'll be first in line to play."

It's not clear what the publisher means by "other platforms," but it might suggest that the third title in the series could come to PlayStation 4 and Xbox One in addition to PC. When contacted for comment about what platforms the announcement might refer to, Starbreeze simply replied, "Other exact platforms are still pending; we’ll share more news about System Shock 3 in the future."

As part of the deal, "Starbreeze will be able to recoup 120 percent of its full investment including marketing costs," with the company's share of revenues becoming 50 percent after that point is reached. OtherSide will retain 100 percent of System Shock 3's rights, meanwhile.

Starbreeze has previously developed games such as Brothers: A Tale of Two Sons and cyberpunk shooter Syndicate. More recently, the company has turned its hand to publishing, and it recently announced it will handle the marketing and distribution for Double Fine's Psychonauts 2.

In addition to the threequel, there is another System Shock game in the works. Night Dive Studios, with the help of Kickstarter funding, is developing a remake of the original game--a game that went on to inspire other titles like BioShock and Deus Ex. The reboot is scheduled to come out in Q2 2018 for PS4, Xbox One, and PC. 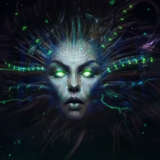