If you've ever wished your Nintendo Switch Joy-Cons had a better D-pad, here's a nice solution.

The Nintendo Switch's Joy-Cons offer a lot of flexibility in how the system can be played, letting you use them while the switch is docked, in handheld mode, or even propped up on a flat surface. They can also function as a pair of controllers in local multiplayer. But since the Switch launched, there's been one Joy-Con feature that has been a sore point for players, and no, we're not talking about drift. The Switch's Joy-Con controller lack a traditional D-pad and instead offer four directional buttons on the left-hand Joy-Con where the D-pad would be.

For those who prefer the feel of a traditional D-pad, which feels like a must for playing some of the classic SNES games on Switch like Super Mario World and Super Metroid, Hori offers a line of D-pad Switch controllers that simply replace the left Joy-Con on your system. Though they're available in a variety of designs, there's a rare deal on one particular version right now at Amazon--you can snag the Black & Gold Pikachu design that's black with yellow lightning bolts for $15 right now, down from $25. We first covered this deal earlier this week when the controller fell to $20, and now you can snag it for even less. 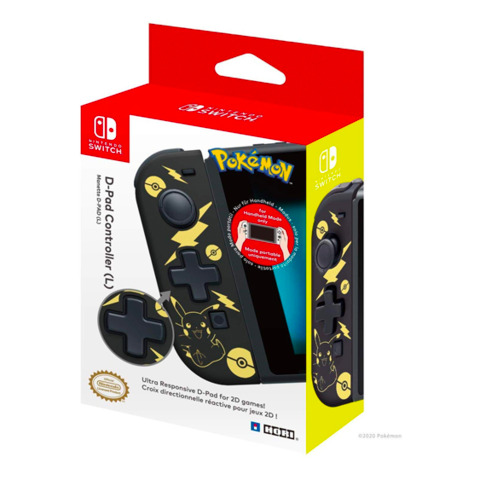 The Black & Gold Pikachu design is the only one discounted, but it comes with free Prime shipping as early as tomorrow.

Unfortunately, the Zelda and Super Mario designs are still full price, and the Mario and alternate Pikachu designs are wildly overpriced and in low stock. It's been a while since we've even seen the Hori D-pad controller in stock, however, so if you've been frustrated with the D-pad buttons on your Switch Joy-Cons, snagging the Black & Gold Pikachu option at this price is worth it. Keep in mind this is just one left controller--there's no matching right one that comes with it.

The Hori D-Pad Switch controller ranks on our list of the best Switch controllers we've tried, and it'd also make a great Mother's Day gift idea if the mom in your life has a Switch and plays often.