New visual options will be available for both of the re-released games, Castlevania: Symphony of the Night and Rondo of Blood 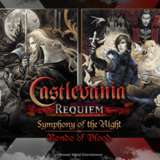 Castlevania Requiem: Symphony of the Night & Rondo of Blood
Follow

Konami is about to re-release two of the Castlevania series' best games as a bundle, and now we're getting a look at some of the new visual options that will come with the games when they release later this month. Castlevania Requiem will feature both Castlevania: Symphony of the Night and Castlevania: Rondo of Blood, released in one package exclusively for PS4.

In a pair of tweets, Konami showcased the new features. The first feature (in the first two images below) allows you to play with "blackout" enabled. This means players will be able to play the game without wallpapers (which will be enabled otherwise). The last two images show off the game with pixel smoothing enabled for a more updated look. Of course, those who want to stay true to the games' original visual styles can simply avoid turning the feature on.

Both Symphony of the Night and Rondo of Blood are receiving overall updates in this re-release, too. When the bundle was announced last month, Sony said Castlevania Requiem would see "4K/1080p upscaling, multiple high resolution backgrounds, different rendering options such as smoothing, and full Trophy support." It also said the games will utilize the DualShock 4's analogue stick for movement and the speaker to play sounds when you pick up an item. When GameSpot asked Konami about the bundle's PS4 exclusivity, the company responded there were absolutely no plans to bring the games to other platforms.

Symphony of the Night came out on the original PlayStation in 1999, and its effects on game design are still being felt with titles like Dead Cells and Hollow Knight drawing influence from it. Rondo of Blood came out far earlier, for PC Engine CD in 1993, and is also praised as one of the best in the series and one of the best PC Engine games. The bundle releases on October 23, and those that preorder will get a special discount of 15% off on the PlayStation Store.

Castlevania Requiem: Symphony of the Night & Rondo of Blood