The updated and improved version of Microsoft's classic PC RTS is coming in February for $20.

Age of Empires: Definitive Edition will launch on February 20 for PC, Microsoft announced today. The new version of the classic RTS includes "completely" re-done assets, along with multiplayer functionality through Xbox Live (there is also local LAN support).

Also in the Definitive Edition is a new orchestral score, in addition to a re-recorded soundtrack. Additionally, every campaign mission now has voiced narration, while the campaign and scenario editor now lets you create your own custom campaigns. These can then be shared with other players through the Age of Empires website.

Additionally, new for the Definitive Edition is a new UI, the ability to attack-move, control groups, an idle villagers button, improved destruction, and more.

The $20, PC-only Definitive Edition was originally supposed to launch on October 19, 2017, which was 20 years to the day of the original game's release date in 1997. However, the game was later delayed, due in part to give the team time to "treat the Age of Empires franchise with the respect it deserves," Microsoft said.

Ahead of the Definitive Edition's release in February, Microsoft is expanding the game's multiplayer beta. Starting on January 29, everyone will be able to try it out; you can sign up for a slot here on the Age of Empires website. 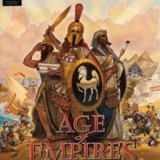