Paper Mario: The Origami King is just around the corner, and a new trailer explains the combat system, debuts some new allies, and more.

Paper Mario: The Origami King is surprisingly close to release for a game we just recently learned exists. That condensed time frame means Nintendo has only a little while to detail the upcoming action RPG before its release on July 17, and so a new trailer gives us a broad overview of its systems and features.

The trailer shows off some of the new characters who will join Mario on his quest, like Bobby the amnesiac Bob-omb and Professor Toad. Those companions will help Mario on his way, along with Olivia, the sister of the villainous King Olly.

It also takes an extended look at the new combat system. It's mostly recognizable from other Paper Mario games, in that you take on a line of enemies with timing-based attacks that can strike multiple foes--like bouncing across them in signature Mario style. But this one also includes a twist on that formula with enemies appearing on a set of rings. You'll be able to arrange the rings before combat starts to strategically position the enemies. Boss battles against the "Legion of Stationary" will also use the ring system, as Mario navigates around the circles to make his way closer for a stronger attack.

Finally, the trailer shows off some of the activities and mini-games you can complete while exploring the kingdom.

Paper Mario: The Origami King was just announced in May, so its July release came as a surprise. Nintendo hasn't announced its own E3 replacement event, but several other companies are starting to roll out their own announcements. Check out our E3 2020 replacement schedule to see when to tune in, and read our Paper Mario pre-order guide for more details on the RPG. 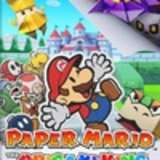