Nintendo UK announces that it will give away copies of the Legend of Zelda: Collector's Edition with GameCube game purchases throughout January.

Nintendo has today announced that it's offering GameCube players in the UK another chance to get hold of its Legend of Zelda: Collector's Edition. The company came under fire from many of its biggest fans in the UK last year when it released only 1,000 copies of the disc through its Stars Catalogue for the whole of the UK and Ireland. The discs sold out within minutes of being made available, despite the fact that fans had to amass no fewer than 4,500 stars--the equivalent of registering a GameCube console, a GBA SP, and around 14 Nintendo games--to qualify for a copy.

A GameCube console bundle containing a copy of the disc was made available in Europe last year, but for Nintendo fans with no desire to purchase a second GameCube or to bid in online auctions, the Legend of Zelda: Collector's Edition has proved frustratingly difficult to get hold of. Today's announcement, however, will see anyone purchasing one of Nintendo's recently released GameCube titles, or two from its Player's Choice range, qualifying for a copy of the disc.

For more information on the Legend of Zelda: Collector's Edition, check out our previous coverage of the game. 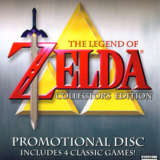