The upcoming PS5 and PS4 game just got a fresh batch of apparel and accessories at the PlayStation Gear Store.

Horizon Forbidden West, the sequel to 2017's Horizon Zero Dawn, launches on PS5 and PS4 sometime in 2021. Without a doubt, it's one of the most anticipated releases of this year, and with a PS5 State of Play livestream scheduled for this Thursday at 2 PM PT / 5 PM ET, it's possible we'll learn even more details about the upcoming open-world adventure. In any case, PlayStation is clearly preparing for increased hype around the game, as new Horizon Forbidden West merch is available now from the PlayStation Gear Store. The Gear Store ships to the US, Canada, and Mexico--and most recently, it now ships to Europe as well.

The new Horizon merch line has released under developer Guerrilla Games' Horizon Raw Materials brand and adds three T-shirts as well as three pieces of drinkware to the Gear Store's Horizon collection. Each of the new tees is made of 100% cotton and features imagery from the game. There are also two new mugs and a water bottle, each of which has a minimalistic Horizon design and is vacuum-insulated to keep drinks hot or cold.

In addition to the new Horizon Raw Materials merch, the PlayStation Gear Store has brought back previously released Horizon products, like The Sunhawk graphic novel, Horizon Zero Dawn: The Board Game, and the Horizon Zero Dawn: Complete OST vinyl. So if you're on edge waiting for news about Forbidden West, you can at least tide yourself over with some Horizon retail therapy. You can check out the full Horizon Forbidden West and Zero Dawn collection below. In some cases, merch is available for cheaper elsewhere (like Amazon), so we've linked that where possible. 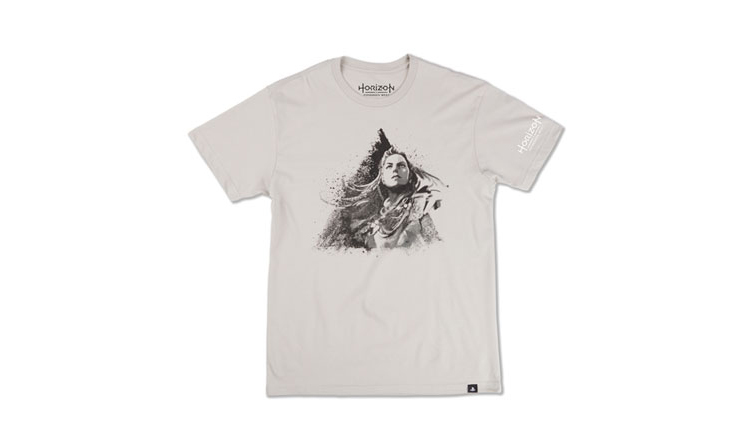 This T-shirt shows Aloy in Forbidden West and features an understated gray-and-black design made of 100% combed ringspun cotton. 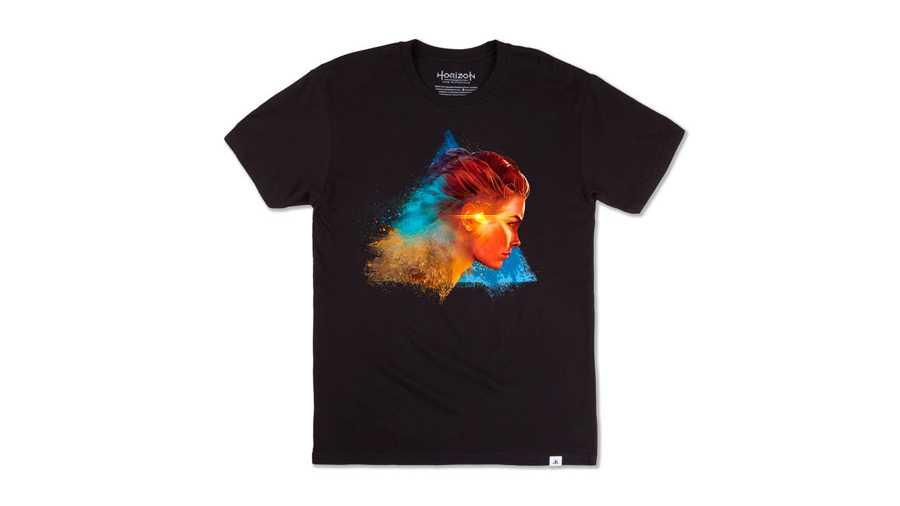 This black T-shirt also shows Aloy, except she's looking off to the side with her Focus clearly visible. The pop of color on this one is really stunning. 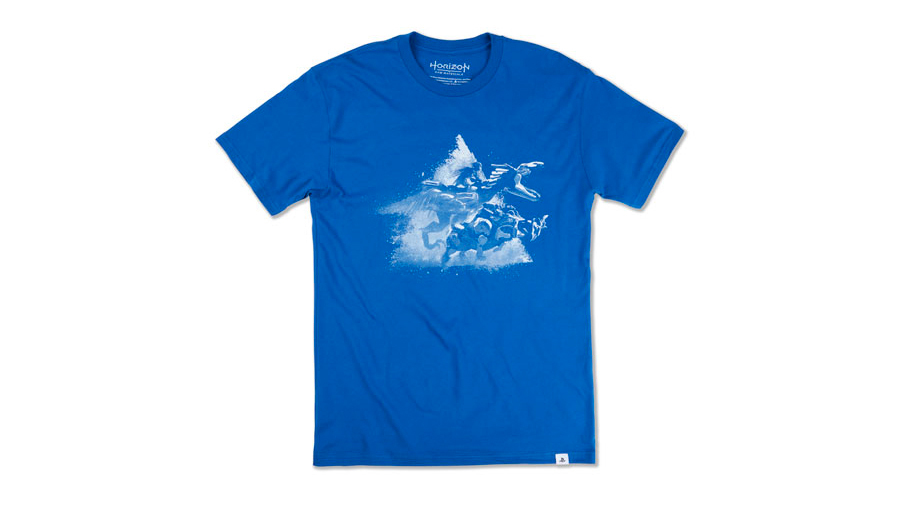 The third new T-shirt is blue and white and shows Aloy charging ahead on the back of a machine. Here's hoping there are some new machine types to take for a ride in Forbidden West--there were only three in Zero Dawn. 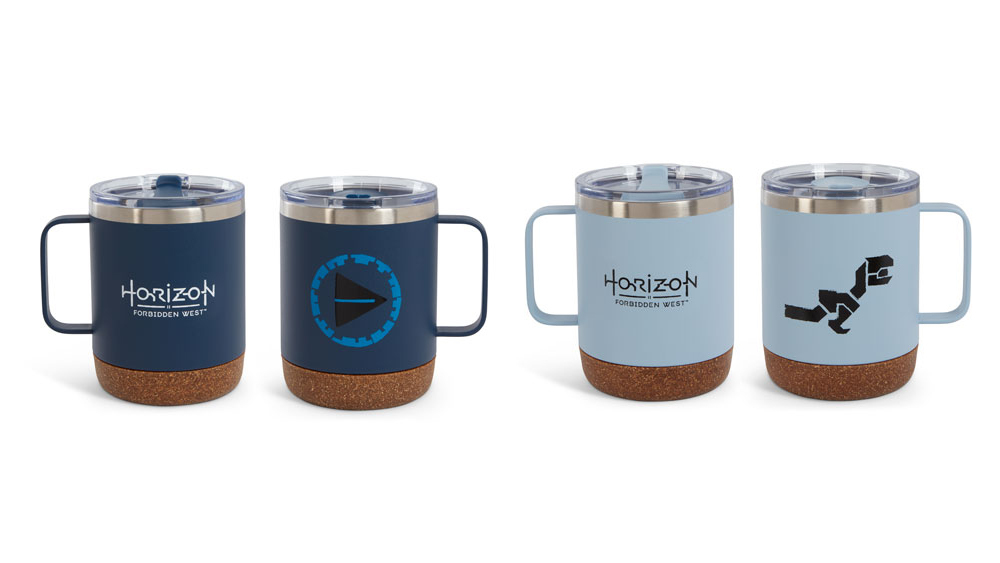 I'm a big fan of these mugs, which are both vacuum-insulated to help preserve the warmth of your coffee or tea. The first design is matte navy and features Aloy's Focus device, while the second design is sky blue and has the symbol of a Watcher. 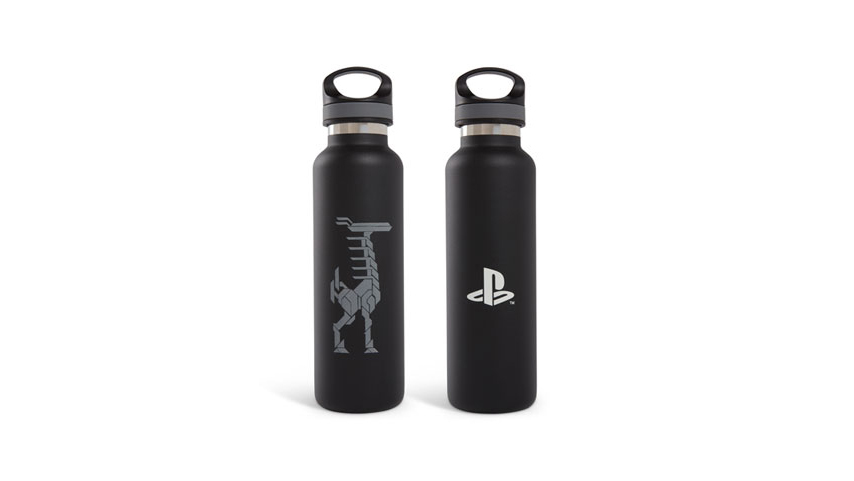 If you prefer to take cold drinks on the go, this Horizon water bottle features the same vacuum-insulated design and the PlayStation logo on one side, with a Tallneck symbol on the other. 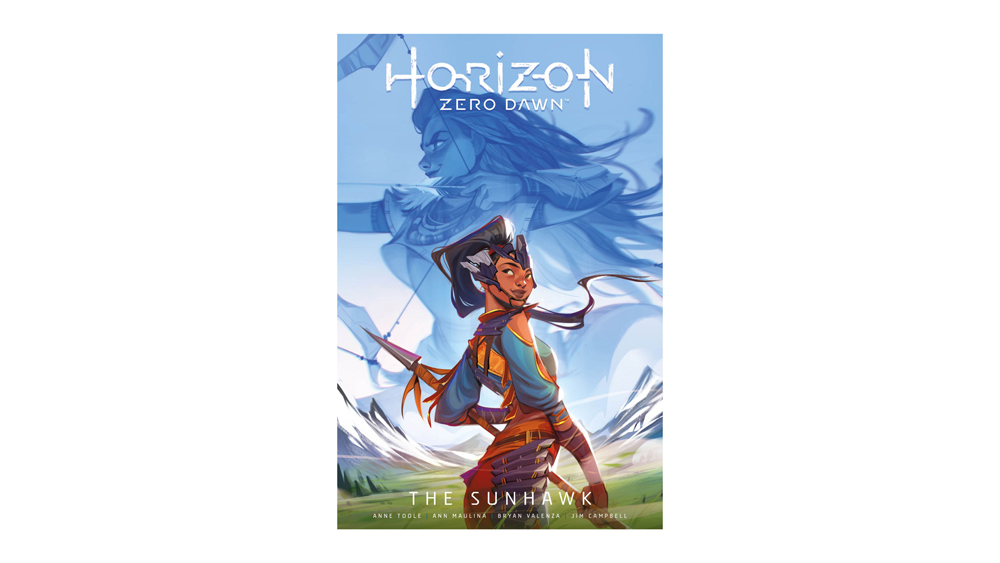 You can snag the first volume of the official Horizon Zero Dawn graphic novel from both the PlayStation Gear Store and Amazon. Amazon has the volume for a bit cheaper, but a special cover is available if you buy from PlayStation. The story follows Aloy's friend and fellow warrior Talanah, a member of the Carja Hunters Lodge. 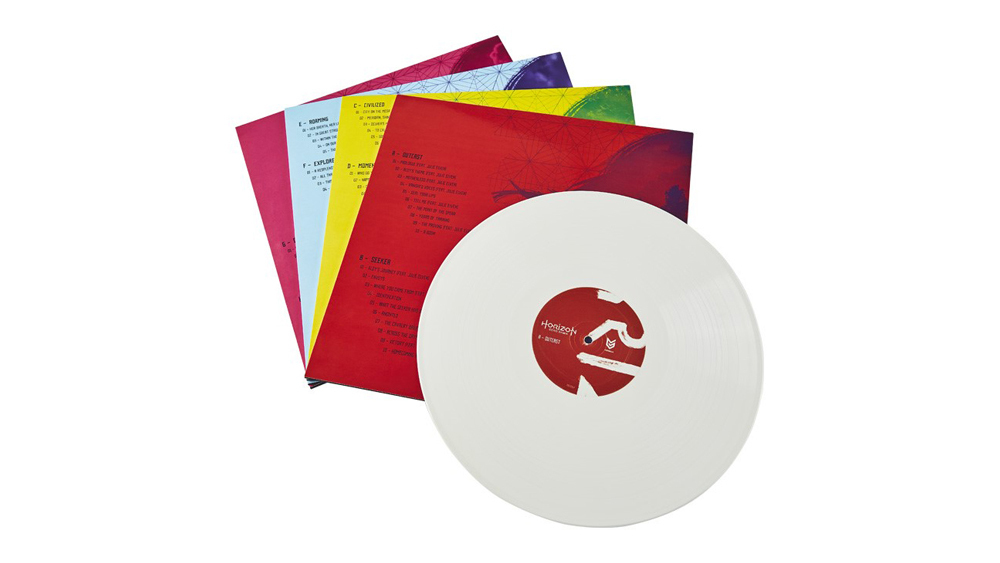 If you can't get enough of Horizon Zero Dawn's music, the soundtrack is available on vinyl for $70 from the PlayStation Gear Store. The set features 74 handpicked tracks across four discs, with each sleeve featuring exclusive artwork.

Horizon Zero Dawn The Board Game 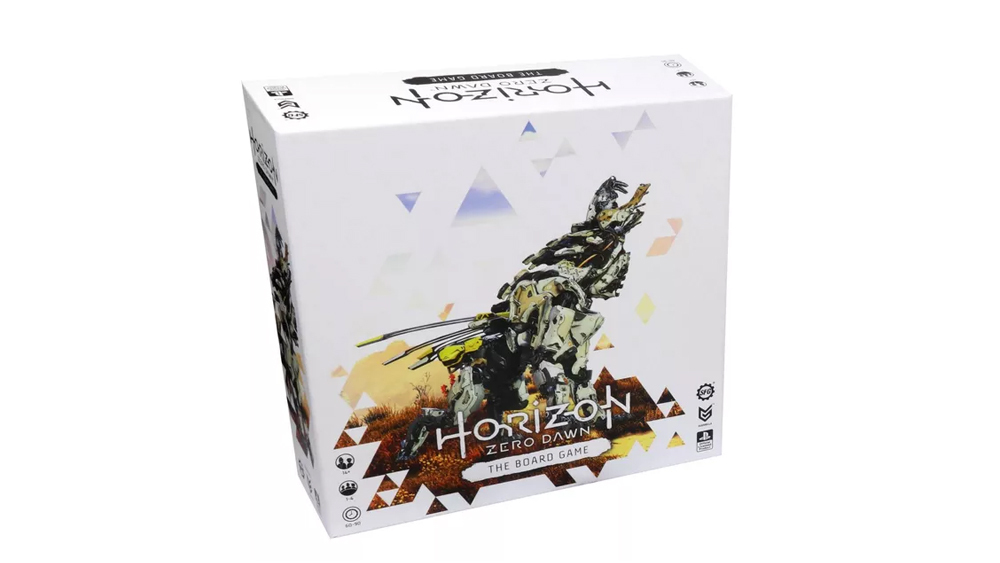 The Horizon Zero Dawn board game was successfully funded through Kickstarter, and you can now buy it at multiple retailers, including Amazon, which has it for much cheaper than PlayStation. This tactical co-op board game is set in the vibrant world of Horizon Zero Dawn and includes detailed machine figures, hunters of different playstyles, and more. 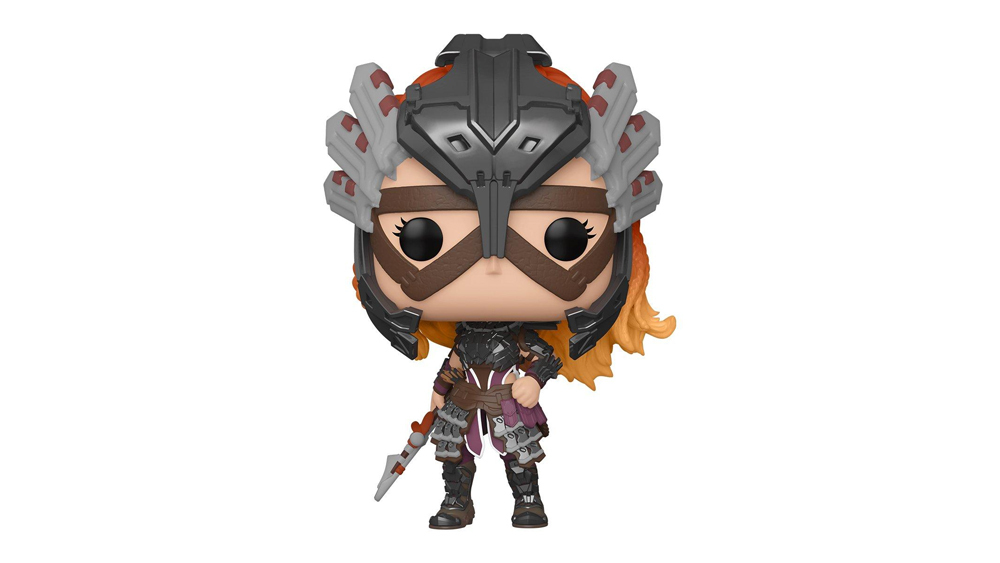 Several Horizon Funko Pops are back in stock at the Gear Store, but again, some of these are available for less elsewhere. This Pop features Aloy donning the intricate Shadow Stalwart armor. 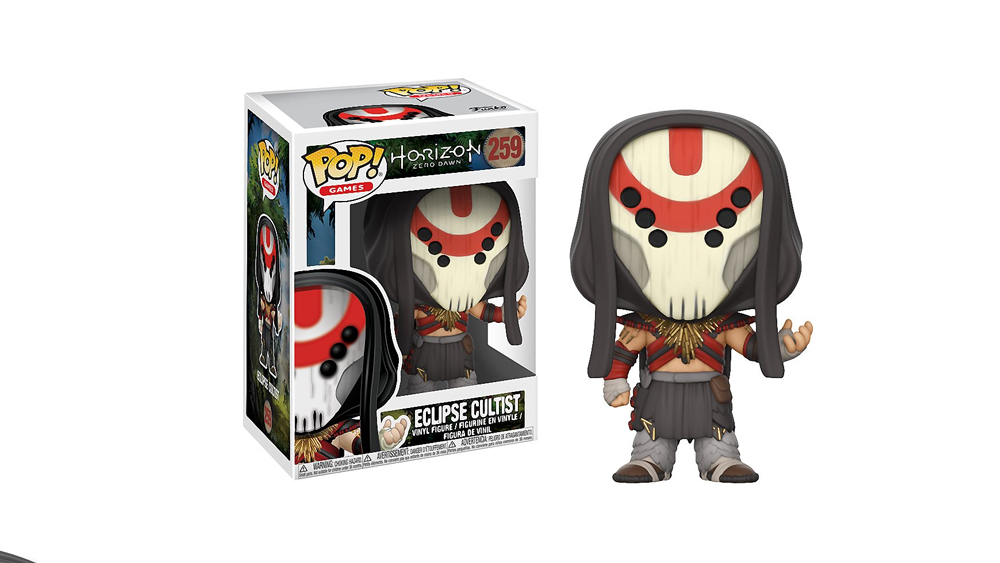 The Eclipse Cultist has his own figure as part of the Horizon Funko Pop collection as well. It's available for $11 from Walmart. 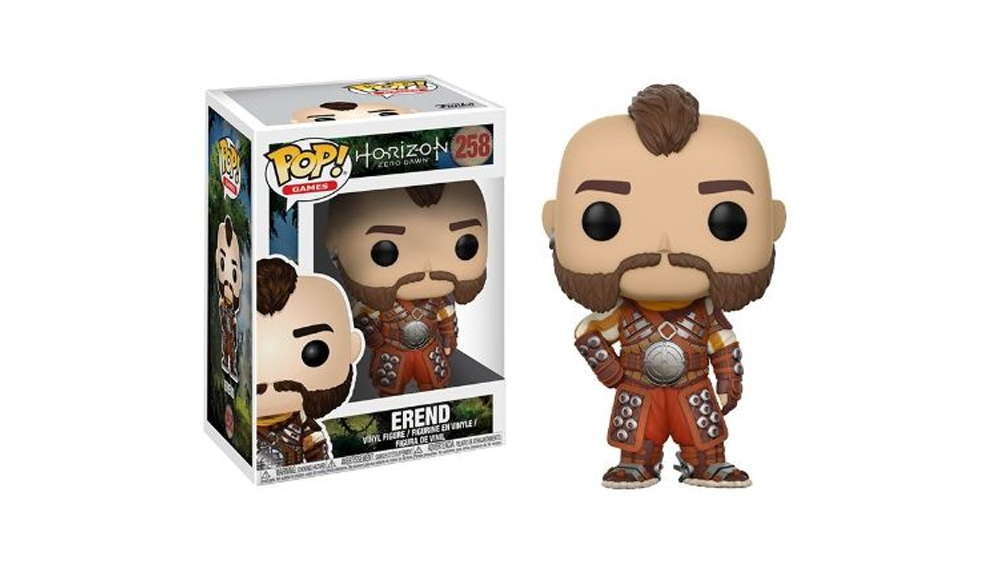 Oseram tribesman Erend befriends Aloy at the beginning of Zero Dawn, and he has a Funko Pop of his own as well. It's also available for $11. 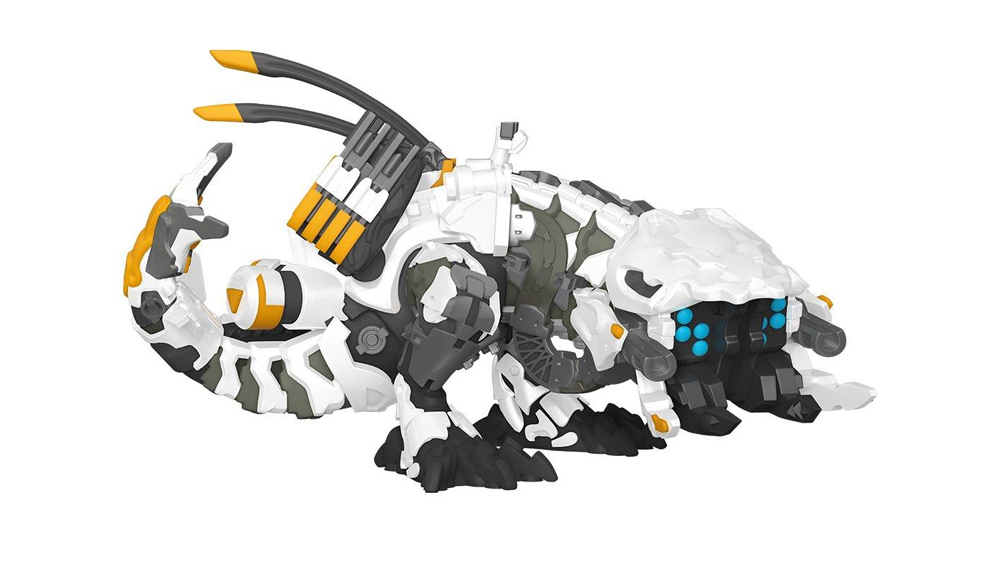 One of the most foreboding machines of Horizon Zero Dawn, the Thunderjaw, is captured in Funko form with this 6-inch figure. 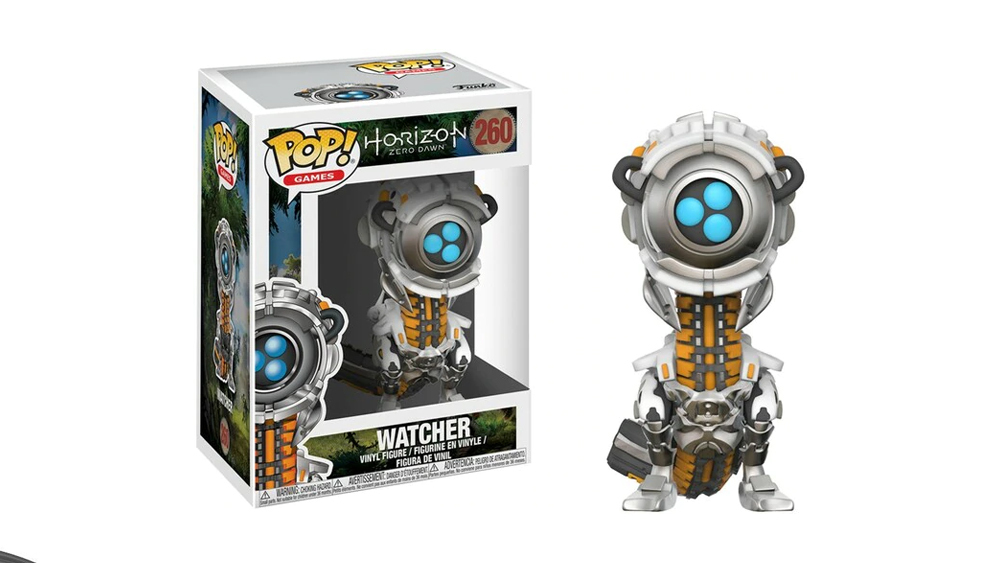 There's nothing like sniping a Watcher from afar. You can own one of these fast-moving little machines in Funko form for $12. 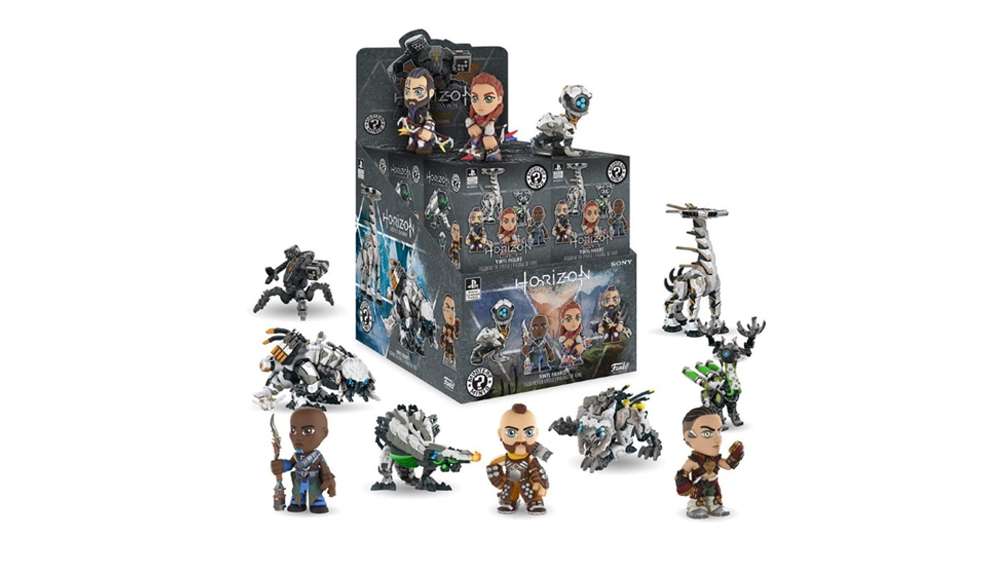 Finally, you can take your chances and snag a collectible mini figure of one of the characters or machines from Horizon Zero Dawn, such as Aloy, Rost, a Thunderjaw, or a Tallneck. Each figure stands at 2.5 inches tall, and you'll receive one at random.