The two Wild Shape & Polymorph sets from WizKids will give Druids and spellcasters an extra bump in their Dungeons & Dragons gameplay.

WizKids has two new sets of miniatures that give Druids and polymorphing characters a bit more representation--or for players who want to fight a shark. D&D Icons of the Realms: Wild Shape and Polymorph Sets feature miniatures modeled after various animals from the fantasy realm, and like most of WizKids' miniatures, they are highly-detailed with some excellent paint jobs.

Released this month, the two Wild Shape and Polymorph Sets feature animals and beasts from the world of Dungeons & Dragons that you can battle, shapeshift into, or have as your familiar, depending on the situation. Check out some of the minis from Set 1 below.

Set 1 features seven minis including a cat, giant boar, giant octopus, giant shark, giant toad, rat, and tiger. As you can see in the image above, they vary in size, and have stunning paint jobs on each one. And look at that giant toad, ready to eat your player and digest it very slowly. Delicious! And who doesn't want to encounter a shark and fight it--or polymorph into it? Your players can recreate your favorite scene from Sharknado in your campaign with the addition of this mini to your collection.

The giant octopus looks exceptionally cool, and while coming across this creature in your D&D game may be a bit of a rarity, maybe your DM will make an exception. It features an extremely impressive sculpt with subtle nuances to to the paint, helping create some really cool looking textures on the tentacles.

This set of minifigures is available now for $45 on Amazon. They are also available to check out on the WizKids store, where you can find out where to buy this set at your local gaming store. 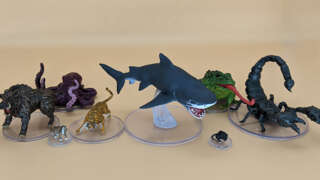 There is also D&D Icons of the Realms: Wild Shape and Polymorph Set 2, which features a different batch of animals. This set of minis includes a brown bear, dire wolf, giant ape, giant eagle, giant wolf spider, owl, and polar bear. Once again, there is a tremendous amount of detail between all these minis, all of which sit on a clear base so they don't obstruct the battlefield.

With this new set, you could take your wizard character Henry Potter and have him accompanied by his owl Hedwin. Or your resilient fighter character Jon Smow could have his trusty dire wolf Toast right by his side. Heck, you could even have your lovable hobbit Fro-yo Baggins ride to victory on the back of a giant eagle--who doesn't have a name. It's just a giant eagle.

Currently, Wild Shape and Polymorph Set 2 is not available for preorder on Amazon, but it is listed on the WizKids Store. It will also retail for $45 when it arrives in stores and online.

WizKids has been pumping out a lot of very cool products in recent months in order to improve your D&D games. Check out some of the Warlock tile sets and accessories, new Boneyard minis, and a life-size severed hand in a jar--it's not real, so don't worry.