Upcoming sequel to be sold next month with different editions that include replica Helghast helmet and figurines of "Sack-ey" stature.

Guerilla Games’ third installment of the Killzone franchise will be making its way onto a gamer’s lap soon, which means that an announcement for special editions is due for the Asia-Pacific region.

Sony Computer Entertainment Hong Kong recently announced a plethora of bundles with specialized content ranging from Killzone-emblazoned Sackboy plushies to a Helghast helmet. The game itself will cost enthusiasts SG$78($60), while the Killzone 3 SteelBook Edition will cost SG$78 ($60) and comes with the game, a PlayStation Network voucher that gives gamers access to a Retro Map Pack, a dynamic theme for the PlayStation start menu, and the soundtrack to the game. Gamers will also get a SteelBook case to house their copy of Killzone 3.

There will also be a Killzone 3 PlayStation Move Pack that will retail for SG$139($108). This bundle comes with the SteelBook Edition, as well as a PlayStation Move motion controller and two Killzone-themed Sackboy figures. Specifically, these Sackboy figures will be tailored after the standard Helghast trooper and main character Sev.

As if that weren’t enough, gamers who wish to commit to a PlayStation 3 are given a choice to purchase the Killzone 3 Entry Pack that will be retailing at SG$569($443). This bundle will include a 160GB PlayStation 3 with a DualShock Wireless controller and the usual cables and cords, a SteelBook Edition of the game, and the two aforementioned Sackboy figures. 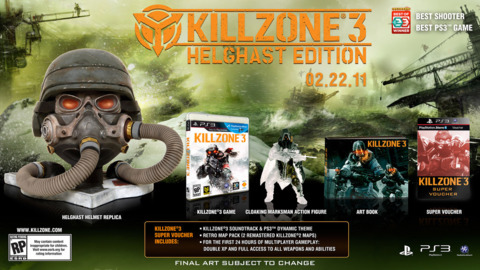 Topping off this list of bundles is the Killzone 3 Helghast Edition. As previously covered, this bundle contains the SteelBook Edition of the game, a semitransparent Helghast Marksman action figure, an art book of the game, and a Helghast helmet replica that houses the previously mentioned content. The bundle costs SG$214($167).

If that weren’t enough, Sony Hong Kong is also offering a sharp shooter attachment to help simulate the feel of holding a semi-imaginary weapon in your hands while traversing an alien planet filled with space Nazis with British accents. The price of this peripheral has yet to be determined.

Killzone 3 will be out February 22.