LOS ANGELES--When Bungie left Microsoft, the developer expressed an interest in expanding its horizons beyond the Halo universe. Despite that, the developer will be returning to its signature series at least once more, as Microsoft today revealed the Bungie-developed Halo: Reach during its 2009 Electronic Entertainment Expo media briefing.

The game was announced with a teaser trailer at the end of a segment dedicated to this year's Halo: ODST, which will arrive with an all-new co-op mode on September 22. The trailer showed a planet--ostensibly Reach, the fortress planet where Spartans are trained--with a variety of radio chatter in the background. The radio chatter grows appropriately panicked as the planet is apparently "glassed"--or bombarded with plasma weapons--by the Covenant.

The trailer concluded with a notice that Reach falls in 2010. After the trailer, a Bungie representative announced that gamers who purchase Halo: ODST will be able to access the Halo: Reach multiplayer beta on Xbox Live Arcade.

For more from the Microsoft conference and the rest of the show, check out GameSpot's complete coverage of E3 2009. 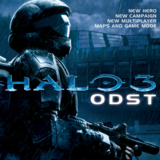