Warriors All-Stars will be a celebration of the world of its publisher, Koei Tecmo, when it comes out on PC and PlayStation 4 this summer. In the new trailer above, you can get a look at the Tamaki Clan, which brings together characters from Dynasty Warriors, Toukiden, Atelier Sophie: The Alchemist and the Mysterious Book, and Opoona.

"Summoned from a diverse range of worlds and time periods to save a mysterious land…the champions of Warriors All-Stars find themselves in the middle of a clash for control. When a magical power source dries up after the king’s passing, Princess Tamaki performs a ritual to summon saviors in times of dire need," said Koei Tecmo about the upcoming game's plot.

Other characters, yet to be announced, will be summoned by Tamaki's rivals Setsuna and Shiki. The three separate groups will have to battle for dominance of the kingdom.

Players will engage in Key Battles and take on Free Scanarios, where they can access their clan's roster of warriors and craft their team. Koei Tecmo says your choices with those chatacters will affect how the game's story unfolds and how it ends.

There is also a new Bond system, which allows you to improve the relationships between your characters by having them fight alongside each other and spend time together in the barracks. By achieving a closer bond between them, you'll unlock stronger abilities on the battlefield.

Warriors All-Stars is out August 29. Follow our coverage here to get a look at the next clan of characters as soon as it's released, and check out the latest details on Dynasty Warriors 9, an open-world adaptation of the series now in development for PS4. 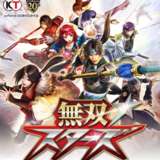