Double Fine's maiden venture with crowd-sourced fundraiser Kickstarter has been met with nothing less than unmitigated success. In a post to its Twitter feed today, Kickstarter confirmed that Double Fine Adventure has set a record for most funds raised and most number of backers in 24 hours.

The update also noted that funds raised in excess of the $400,000 mark will be channeled into improving the quality of Double Fine Adventure and 2 Player Productions' documentary chronicling its development. Additional funds also equate to a wider release in more languages and on more platforms, as well as more music and voice acting and an original soundtrack.

Double Fine Adventure is set to be an old-school point-and-click PC adventure game, much like the kind Double Fine founder Tim Schafer and designer Ron Gilbert made in their days at LucasArts. Gilbert made his name with titles like The Secret of Monkey Island and Maniac Mansion, while Schafer left his own mark with Maniac Mansion 2: Day of the Tentacle and Grim Fandango.

All backers who contribute $15 or more will get access to the serialized documentary, as well as early access to a PC beta and a copy of the finished game (both through Steam). Signed posters, original art, and lunch with Schafer and Gilbert are among the perks backers can get at higher tiers. However, a number of these premium-tier contributor perks are sold out. 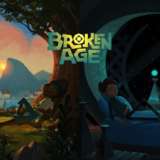