Clash Of Clans Is Celebrating 10 Years With An Exaggerated Retrospective

Developer Supercell has decided to celebrate a decade of Clash of Clans by pretending it has actually been around for 40 years.

Clash of Clans is a huge mobile hit and has been since it released 10 years ago. A decade of millions of engaged players is an impressive run, but developer Supercell decided 10 years wasn’t quite long enough, so to celebrate the anniversary milestone, it has created a strange alternate universe where Clash of Clans has been around for 40 years. To make up for the 30 years where players weren’t able to enjoy Clash of Clans, Supercell has created a number of videos, images, apparel, breakfast cereals, and more to fill the gap.

To kick things off, Supercell has imagined (and developed) a collection of mini-games playable in Clash of Clans that play like old arcade games inspired by the different decades. It has also created matching art to go alongside the games with a series of posters.

Supercell has also produced a 20-minute documentary feature about the making of Clash of Clans, again, imagining what it would have been like had the game been developed in the '80s. It’s a strange approach to exploring a popular game’s backstory--which is to say it is entirely made up. You can watch the full video below.

Other material includes Clash of Clans Garbage Pail Kids cards, which is a thing you can actually buy and own from Topps, but they will only be available for one week. Supercell has also produced a cereal in partnership with General Mills called Barb's Choco Boom Booms. Like the Garbage Pail Kids cards, this is also a product you can actually buy at Walmart.

Supercell nice enough to send GameSpot a poster, the box of the Barb's Choco Boom Booms cereal, and some '90s Clash of Clans apparel. We haven’t opened the cereal to sample it just yet.

Alongside all the retro-but-technically-not-retro material, Supercell has also added a 10-day Clash boss campaign to Clash of Clans. There will be a new map with 11 levels and every day, starting today, there will be a new challenge and a special prize all inspired by the game’s best content over the years. Each day will celebrate the characters and winning strategies that defined a year of Clash gameplay.

It will all culminate in a big “celebration for the ages”. Players can also unlock the “pixel scenery” by playing the challenge levels and scoring 15 stars. There will also be in-game cake and the Pixel King hero, which will be available for free.

For more from Supercell, you can read our interview about its other game that is celebrating 10 years that released a few months before Clash of Clans changed the developer forever, Hay Day. 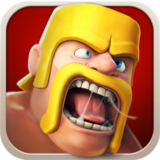