Best PlayStation Keyboard And Mouse 2021: How To Use With PS4 And PS5

If you want to make the switch to a keyboard and mouse for either PlayStation 4 or PlayStation 5, here's what you should know.

When it comes to gaming on a PlayStation console, be it a PS4 or PS5, it might not cross your mind to use a keyboard and mouse. However, both consoles support the traditional PC input scheme, which might make some games more comfortable to play or just easier to manage if you're choosing to play on a desk. Better yet, the range of supported keyboards and mice is rather wide, with both the PS4 and PS5 supporting a range of wired, wireless, and Bluetooth peripherals.

Where you might not find the best support is with games, as developers must explicitly allow keyboard and mouse as an input if you want to use them natively (there are tools that let you trick consoles into thinking you're using a controller, but we won't be covering those here). Right now, there aren't any PS5-only titles that support keyboard and mouse input, but many PS4 titles do (and these are playable via backwards compatibility on PS5), including but not limited to:

How to use a keyboard and mouse on PS4 or PS5

Connecting your keyboard and mouse to a PlayStation console is straightforward, too. For wired peripherals, you simply plug them into a USB-A on the console. Wireless peripherals that use 2.4GHz dongles are plug-and-play too, with both the PS4 and PS5 recognizing most when the dongle is simply plugged into the console. Bluetooth devices, on the other hand, require you to pair them through the console's setting's menu, and this might be the most hit-or-miss option depending on how good the Bluetooth support is on your respective keyboard or mouse. They're not the best options for gaming, anyway, given Bluetooth's inherent latency compared to both wired and 2.4GHz connections.

Things to keep in mind

There are several caveats you should consider before making the switch to mouse and keyboard on PlayStation. For multiplayer games, like Fortnite or Overwatch, you will automatically be matched against PC players when using a keyboard and mouse, or console players who have opened matchmaking to other PC players. This is to keep things fair online, as using a keyboard and mouse can offer a significant advantage to most controller-based players. Another thing to consider is some game-specific features that might make use of unique aspects of a controller for immersion, especially in single-player titles. Although there are no PS5 games out right now with keyboard and mouse support, using these peripherals in the future will exclude you from features such as the DualSense's adaptive triggers, which can add be very beneficial to specific games.

The best PlayStation keyboards and mice

If you are looking to make a switch in your PlayStation setup, you have loads of options to choose from. Below, we've rounded up some great keyboard-and-mouse bundles that offer great value, as well as separate keyboards and mice that offer great support for all their features without needing to interface with PC software that won't be available on a console (software for controlling RBG and macros, for example). There are also lapboards you can buy that make it much easier to game with a mouse and keyboard from the comfort of your couch, offering the best of both worlds if you're willing to pay the premium. 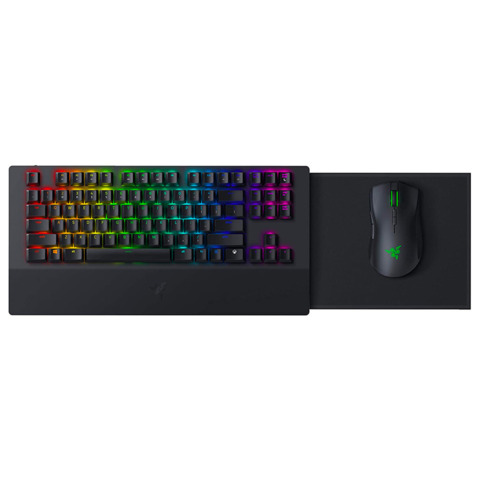 If you're planning to play with a mouse and keyboard but not give up the comfort of your couch, then you're going to want a lapboard. Razer makes probably the best one out there in the Razer Turret. Don't be put off by the Xbox branding--this wireless keyboard-and-mouse combo works just fine on PlayStation consoles with its 2.4GHz dongle. The price is a little steep at $250, but this is an all-in-one package with a tenkeyless mechanical keyboard, a retractable, magnetic mousepad, and a mouse with a profile very similar to Razer's DeathAdder. It comes with a docking station for charging and very comfortable padding on the bottom for long gaming sessions, making it an ideal fit if a controller just isn't doing it for you anymore. 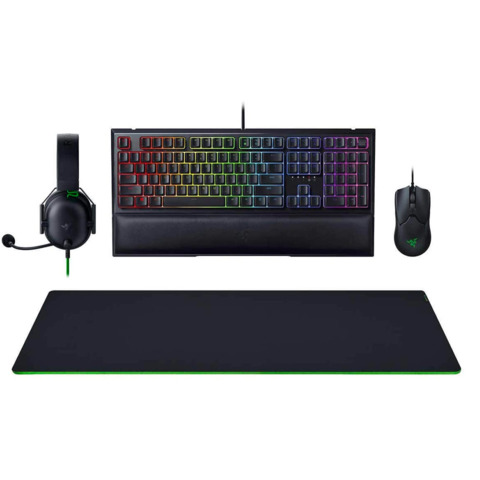 Another option if you're interested in what Razer has to offer is the company's All-Star Gaming Bundle, which includes a keyboard, mouse, and headset again. This time you get the Razer Ornata V2 RGB, which is a membrane keyboard with some slim clicking elements to replicate the feel of a true mechanical keyboard. The Razer Viper ambidextrous mouse is included along with the excellent Blackshark V2, which is one of the most comfortable headsets around. You'll also get a large Gigantus V2 XXL mousepad, which might be perfect if you're planning to play PlayStation on a desk. 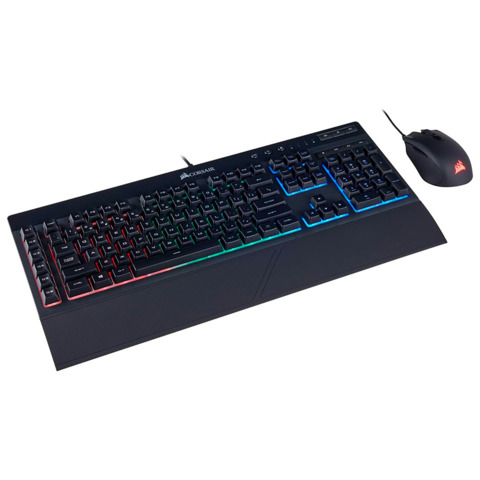 Corsair offers a great combo deal on the K55 keyboard with the Harpoon RGB gaming mouse, both in wired variants. The K55 is a membrane keyboard with three-zone lighting, which makes it a little less robust in the RGB department. But with a detachable wrist rest and media controls, it has everything you need for good, comfortable gaming sessions. The Harpoon mouse is also a great choice, with up to 60 hours of playtime on a charge, six programmable buttons, a lightweight 99g build, and a 6000 DPI sensor for great tracking. At this price, you'll struggle to find a better bundle. 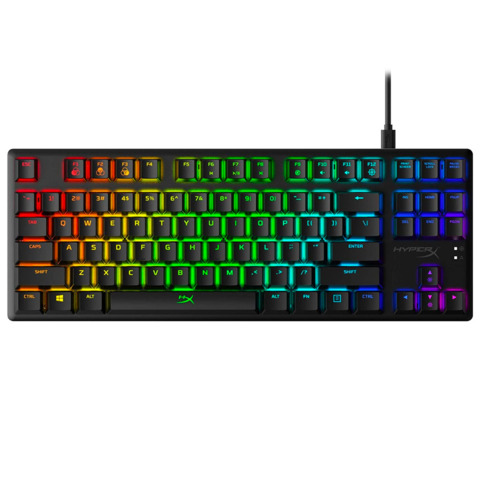 Since pretty much every wired keyboard will work with both PS4 and PS5, you have a large range of great gaming keyboards to choose from. But many of these require PC software to get the best out of them, which makes the HyperX Alloy Origins Core a great compromise. It features lovely mechanical switches, including HyperX's own tactile aqua switches, as well as on-board memory that allows you to flick through programable profiles without needing to be linked to proprietary software. This means you can set up three different lighting or macro profiles on a PC and have those transfer over for your use on PlayStation. At $90, it's also a great price for a solid keyboard, although you will need to be fine with a tenkeyless design. 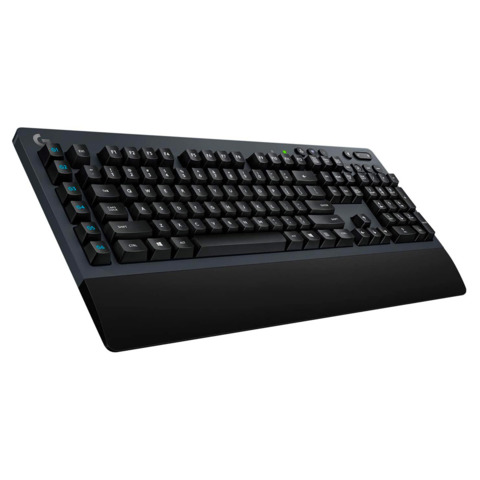 On the front of great wireless keyboard options, the Logitech G613 ticks many of the boxes. Firstly, it's wireless with two connection options, both 2.4GHz and Bluetooth, which gives you flexibility when it comes to using it for both PlayStation gaming and work. It features Logitech's Romer-G mechanical switches, which are somewhere between a traditional tactile and clicky switch. There's no backlighting to speak of, but you do get a solid (albeit plastic) build that will stand the test of time and a built-in wrist rest for comfort. Two AA batteries are all you'll need to get going--according to Logitech, that should provide around 18 months of use. 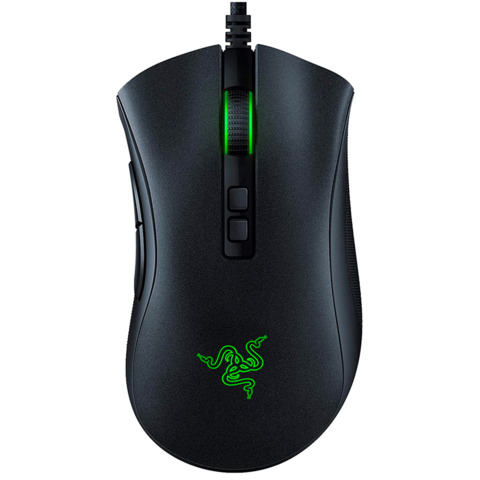 The Razer DeathAdder is as timeless as it gets when it comes to gaming mice, with Razer's most popular design having endured for over a decade. This latest version brings several improvements, including a new sensor, faster mechanical switch, eight programmable buttons, and Razer's SpeedFlex cable that will make it feel wireless while offering the response times of being wired. It's as low fuss as a reliable gaming mouse can get, making it a perfect choice for long play sessions on PlayStation. 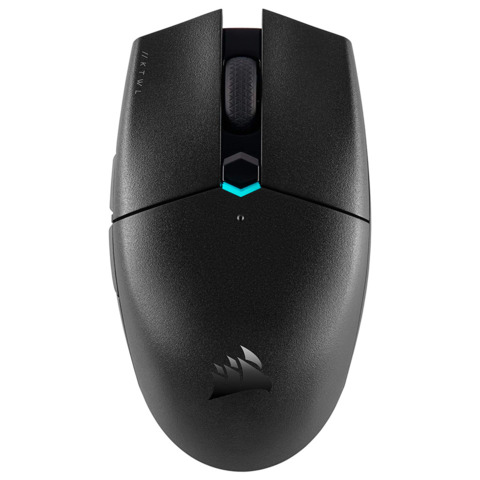 If you aren't looking to spend close to $100 for just a mouse and don't want any wires, then this budget Corsair wireless gaming mouse might be perfect. It uses a 2.4GHz dongle for strong and seamless wireless connections, weighs just 96g, and works off a single AA battery that is rated to last over 135 hours of playtime. It also features Bluetooth connectivity, so when latency isn't an issue, you could even use the Katar Pro Wireless for work on the go or at your desktop. 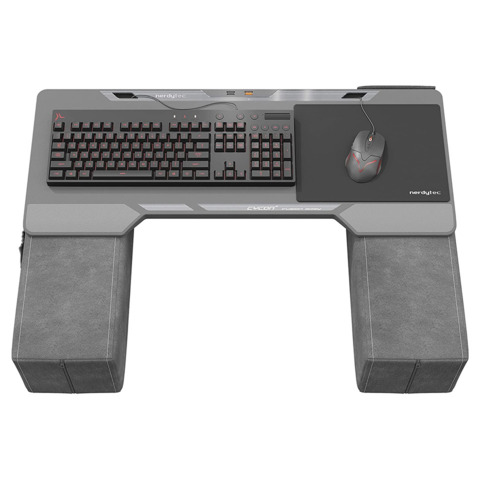 The Couchmaster Cycon 2 doesn't come with a keyboard and mouse. Instead, it's an ultra-comfortable docking station, providing a USB hub for your keyboard and mouse and then connecting wirelessly to your PlayStation. It offers a lot of space for you to nestle into on your couch, giving you armrests that are omitted on many other lapboard options. For that, it's priced considerably higher at $180, while still requiring you to provide your own peripherals as well. But it's a great option if comfort is as paramount to your gaming as your choice of input device.