Deal expected to be complete by Spring 2016.

Activision Blizzard has acquired King Digital Entertainment in a deal worth $5.9 billion, the company announced in a press release today. The deal sees Activision acquire all of the outstanding shares in King, and is expected to be completed by Spring 2016.

King is best known for its portfolio of Facebook and mobile games, including Candy Crush Saga and Candy Crush Soda Saga, two of the top five highest-grossing mobiles games in the U.S.

An excerpt from the press release reads, "Activision Blizzard believes that the addition of King's highly-complementary business will position Activision Blizzard as a global leader in interactive entertainment across mobile, console and PC platforms, and positions the company for future growth."

The announcement comes months after news of King's falling shares was revealed in its May financial report. In related news, Activision shared a new user milestone for its sci-fi shooter Destiny earlier today. The game now has over 25 million registered users, and is now the "most watched console game on Twitch."

Activision Blizzard will hold an earnings call to discuss these results tomorrow, November 3, starting at 5 AM PDT / 8 AM EDT. GameSpot will be on the call, so stay tuned to the site for more news updates as they roll out. 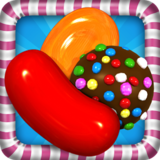