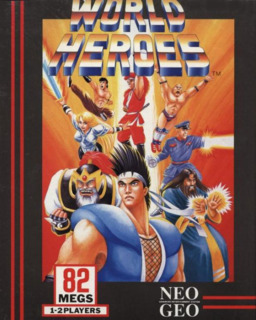 SNK got a start on the fighting game bandwagon with Fatal Fury for their Neo Geo arcade system, Alpha Denshi who are more known as ADK worked together with SNK to make another fighting game called World Heroes. Where Fatal Fury was a decent Street Fighter contender World Heroes is a straight up Street Fighter rip-off where Dr Brown a scientist created a time machine and hosts a tournament to pit fighters around history to see who is the strongest. Most of the fighters are based on actual historical figures while others are just fictional which are just in the game as a means of keeping the fictional as it can. This seems okay on paper but the premise is rather flat and the character endings are not interesting.

Let us not mince words when I say this, this game is a street fighter rip-off with characters that feel like them. You got Hanzo and Fumma who are like the Ryu and Ken just that Hanzo wears a blue outfit, both of them having their own Shoryukens and Hadokens in which they throw Shurikens instead. Muscle Power is like a poor man's Zangief, Dragon has a hurricane punch move where he does multiple fast punches similar to Ehonda's fast slaps attack and Brocken a cyborg who looks like M. Bison but can stretch has arms and legs much like Dhalsim. This actually makes the character line-up and the game itself to be very uninspired at best.

Being a rip-off would not be so bad if the gameplay seems enjoyable right, well it kind off isn't. The game uses 3 buttons which are used for punching, kicking and also throwing and you can use the buttons in cosponsoring with the control stick to perform special moves as well. What is a bit of a step up though is how punches and kicks are executed, if you lightly tap the punch button you will do a light punch but if you press hard on the button you will do a hard punch and vice versa for kicks as well. Surprisingly this control scheme works well and fits with the limited controls on the basic Neo Geo control stick.

The fighting mechanics seem functionable but the game has its issues and lacks polish. Firstly while the controls are simple the throwing can be done upclose and pressing either the punch or kick buttons which kind of makes the separate throw button kind of redundant. Other thing is that the hit detection is not as refined as it could have been, hitting the opponents with punches and kicks is fine but however some of the special moves have smaller hit boxes which makes them not hit the opponent sometimes. Sometimes also you could be standing close to your opponent to do the throw but the throw doesn't come out even if the hands are on the opponent which makes me think that the throws don't come out because you could be standing at least one or two pixels away which often causes the opponent to easily get the upper hand on you. Lastly the AI can also be very cheap in some areas as well, the first few fights are not too bad but however once you either make it half way through the roaster or fighting certain characters the AI goes aggressive, counters your moves frequently and get their moves out before you could. The final boss Geegus is a very unoriginal boss that transforms into different characters kind of like Shang Tsung from Mortal Kombat and he isn't that difficult to beat compared to Geese Howard in Fatal Fury if you know how to beat the other characters. The hardest fight I have had in the entire game is Dragon who is a Bruce Lee reject and is ultra aggressive with his attacks, constantly counter attacks, throws you all over the place and just kills you easily. As soon as a fight starts with him he starts doing throws and multi punch attacks which cause you to lose half of your health bar and you will no doubt waste plenty of credits on this fight alone.

There is a Normal Mode which is the standard fighting game setting but there is also the Deathmatch Mode inwhich all matches take place in a ring that is filled with different traps such as spikes, electrical or flame barriers, oil puddles and bombs and you can shove your opponent into any of these to deal extra damage. The Deathmatch arenas are actually look pretty good and watching your opponents get either impaled by spikes or burned to death by bombs or flame barriers is pretty satisfying.

World Heroes is a poorly done Street Fighter II rip-off that lacks refinement and execution and is only entertaining if you like rip-off style games. The AI is cheap at times especially on lower difficulties and the gameplay just isn't that enjoyable as Capcom's popular fighting games or as SNK's other fighting games on the Neo Geo platform. It is featured some compilations like the SNK Arcade Classics Vol 1 on the Nintendo Wii & PS2 or as a separate download on more current gen platforms which emulates the arcade version if you are at least curious to check it out, but money is best spent on other more better fighting games especially Street Fighter II.

The Deathmatch Mode is pretty enjoyable