Eat sushi, zip a zipper, yank out a gross nose hair-- the mini-games are endless! Check out this gameplay clip of WarioWare Gold, coming this July 27th to the Nintendo 3DS.

First announced during a Nintendo Direct in March, WarioWare Gold is bringing over 300 new and returning "microgames" to Nintendo 3DS. The collection includes microgames from across the WarioWare series as well as characters from previous games, and it's the largest in the series to date. In the video above, you'll be able to see an assortment of WarioWare Gold's microgames, including some new ones.

WarioWare's microgames are short-form, timed mini-games that you must complete at a steadily increasing rate. In Gold, they utilize button, tilt, touch, and microphone controls with a variety of themes. You have to be prepared for whatever the game throws at you, whether it be plucking a nose hair or dodging an oncoming object, and you have to do it fast--things can get hectic very easily.

In addition to the general microgame playlists, we had a chance to play a set of microgames themed around Kat and Ana, two characters who are returning from previous games. They're cute ninja girls looking to eat lots of sushi, and their games fit them perfectly--many of them are goofy takes on traditional or stereotypical Japanese things, like writing kanji characters and sending cute stickers in a text message app. If you fail, their sushi goes bad (and you lose a life).

WarioWare Gold is releasing in stores and on the 3DS Eshop in North America on August 3. Japan gets it August 2, while it launches in Europe on July 27 and in Australia on July 28. 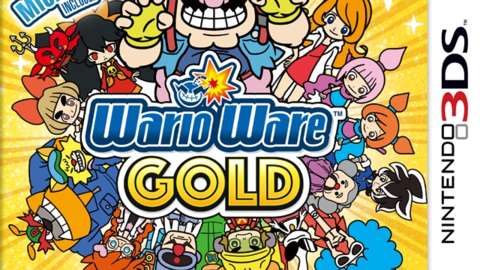