We celebrate Star Wars Day by turning Battlefront 2's gorgeous graphics into mush and make our own movie from it. CinematicTools by Matti Hietanen

Prior to its release, Star Wars Battlefront II generated an immense amount of criticism over its progression system and implementation of microtransactions. In-game purchases were pulled out just hours before launch, but even when fans were worried about players paying their way to unfair advantages, there was no denying that the game was gorgeous. Battlefront II is easily the best-looking Star Wars game ever released. But it doesn't have to be that way.

For Star Wars Day, Potato Mode has worked its magic on EA and DICE's beautiful shooter. The end result, as you can see in the video above, is a horrifying, unrecognizable husk of a game. We start out by turning down all of the in-game settings to Low before making use of the resolution scaling option, which turns everything into a heavily pixelated nightmare that is borderline unplayable. At the 1% option, there's no longer even discernible shapes on the screen.

This being Potato Mode, though, we didn't stop with what you find in the Settings menu. Using the Nvidia Profile Inspector, we mess around with the game's textures, and things go even further downhill for Battlefront II's graphics from there. Toward the end, we also use this awful look to make a small Star Wars movie of our own.

Battlefront II has changed fairly significantly since its initial release. This spring saw the release of some major updates that revamp progression and re-introduce microtransactions, but in a much different way than they were originally conceived. Crystals that are purchased with real-world money can only be used for cosmetics. Alternatively, you could follow some of the steps we go through in the video above to ensure you--and everyone else--has a different, more nauseating look than usual. 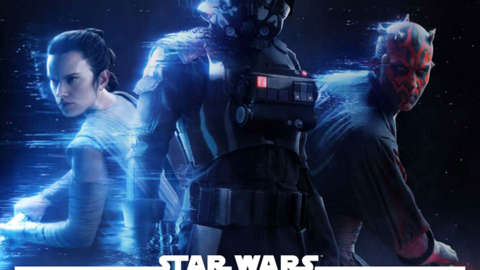 The second Battlefront adds new landscapes from the Star Wars universe, and a comprehensive single-player campaign to complement the multiplayer modes.