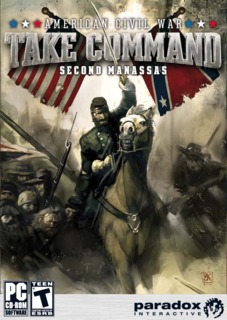 One of the best Civil War RTS game to come out recently.

User Rating: 9 | Take Command: 2nd Manassas PC
By RedneckGamer87 | Review Date: September 26, 2007
Gameplay: Take Command: 2nd Manassas is the latest strategy game to come out of Paradox Interactive’s gates. 2nd Manassas puts players into the second year of the American Civil War, during the 2nd Manassas campaign, naturally. The campaign, which lasted from July to early September in 1862, was host to several major Civil War battles, like Cedar Mountain, Chantilly/Ox Hill, and of course, 2nd Manassas. In total there are 18 missions to play. You take commend of regiments of men to fight against each other. You can control 100 up to 60,000 men in a fight, depending on the battle. You can play as either the Union forces or the Confederate Army. Combat feels authentic beyond the basics of ensuring that regiments and commanders remain true to the textbooks. Positioning is crucial. You need to get your artillery into the right position and place your infantry in the ideal spot to both gain a good firing height and an ideal location for an enemy-breaking bayonet charge. This isn't particularly easy. Maps are sprawling affairs (which get the job done nicely despite being pretty dated, with blurry troops and choppy animations) filled with battle-affecting physical features such as forests, roads, walls, and farmhouses. Unfotunatly there is no multiplayer in this game which is missing in this game.

Graphics: The graphics are okay, but certainly won’t flex your PC’s muscles in the slightest. The game is composed of 2D sprites over a 3D battleground, and while the movement of soldiers and such fluidly enough. Also, the backgrounds are pretty much lacking in detail. There are a few elements like houses and trees to try to give the field a bit more realism, but the terrain is devoid of realistic details and the explosion effects aren’t too great. The coloring in the game is allright, I would say it is colorful and accurate to the time.

Sound: The sound fares pretty well, with a nice score that fits the mood of the game nicely. The battlefield sounds are what you’d expect from large-scale battles, with cannons firing, guns popping and troops yelling.

Value: All in all this is a great Civil War RTS game to play. It has a great deal of realisim to it focus on the move strategic elements of the battlefield. Thought it may be a litter slower in pace, I would say that it is one of the best ones i've played in recent years. Unfotunatly there is no multiplayer which I really hoped there was and thats that only bad thing it does not have, though the graphics could of being improved a little bit. I just wonder why this game was not as well known.....