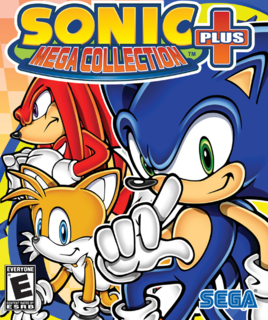 Sonic Mega Collection Plus is, without a doubt, the most complete collection of any video game series to date. Containing the fantastic original four, a wealth of extras, and a nifty new save feature, it's a compilation that no Sonic fan should be without, especially those who have grown disgusted with the series after recent outings like Shadow the Hedgehog and Sonic '06. It's certainly not a perfect collection - outside of the first four, the quality of the games can be described as uneven at best, and the six game gear games, the goodies that supposedly add the plus onto the end of the ps2 port's title, are, with a few exceptions, absolutely worthless. Still, the amount of worthwhile content on the disc is more than enough to outweigh the bad, especially considering the price tag (20 bucks for Sonic, Sonic 2, Sonic 3 and Sonic & Knuckles? Yowsa!)

Do not assume, however, that just including classic games ultimately makes for a great collection. Really, it all comes down to how the system handles these once great games. Sonic the Hedgehog, great game as it is, is only as great as its emulation (the botched GBA port of Sonic immediately comes to mind). And the PS2 - handles it pretty well, thankfully. The genesis games, in particular, play exactly how you remember them, for better and for worse. I say "for worse", due to the simple fact that the emulation really is spot-on, right down to every last glitch and technical problem. Sonic Spinball, for example, contains the same frame rate issues it had back in the day, and the original Sonic contains a minor (I emphasize "minor") sound glitch that sometimes makes it sound like the music picks up static. Still, while its a bit disappointing that the collection doesn't make much use of the ps2's added horsepower, the gameplay is as blindingly fast and immensely satisfying as you remember, so you really can't complain too much. On the other hand, the game gear titles all have an annoying black border around the edges, the result of moving it from its tiny handheld screen.

Oh, and the major new feature the game does add to the games is the implementation of a quick save system, where the player could save their progress and pick up anywhere in a game. It's a nifty feature, and although the time it takes to load the games is a tad long (roughly ten seconds, by my count), it's ultimately minor issue. It's definitely a boon to finally be able to pick up on the original Sonic the Hedgehog after finishing the first stage.

Obviously, the collection's main attractions are the first four Sonic Games, Sonic the Hedgehog, Sonic 2, Sonic 3, and Sonic and Knuckles. As mentioned, they're every bit as fun as they were back in the day, offering a mix of colorful graphics, energetic music, and super-fast gameplay. That's not to say they're perfect, with Sonic 2 and 3's dud co-op, where the second player would almost constantly get lost off-screen, and the dread Sandopolis Zone from Sonic and Knuckles, but these are just minor blemishes on what are otherwise some of the best platformers of the 90's.

Outside of the big four, the rest of the collection is more of a mixed bag in comparison. Sonic Spinball, basically a pinball game developed around the same time as Sonic 2, is actually more fun than many have given it credit for. True, it suffers from floaty ball physics and the aforementioned frame rate issue, but in spite of this, I enjoyed the crazy table designs. On the flip side, there's Sonic 3D Blast, easily the worst Genesis title in the collection, thanks to slippery controls, tedious collect-a-thon gameplay, and an isometric viewpoint that makes precise jumping a near-impossibility. Finally, there's Dr. Robotnik's Mean Bean Machine, a block drop styled game starring everyone's favorite obese mad scientist. Basically, it's a Sonic-themed Puyo Puyo game that doesn't add much to the already crowded puzzle genre. It's still worth a go if you're in the mood, but don't expect it to hold your interest in the long run.

For the plus version of the collection, a few new games have been added. Two of them, The Ooze and Comix Zone, are unlocked if the player has a Sonic Heroes save on the memory card. The Ooze is a bit of a dud, basically putting you in control of a lumbering muck monster who can't do much other than spit sludge at enemies. Comix Zone, on the other hand, is a highly underrated and surprisingly entertaining beat-em-up, with a surprisingly deep combo system and one of the most awesome art styles around. It's one cause for hesitation is its high difficulty - without any system of lives or recovery checkpoints, many players will find themselves struggling to make it past just the first level.

Also new to the plus collection are six games from Sega's Game Boy competitor, the game gear. While its nice to finally be able to play Sega's little-known handheld, most of the games simply aren't good enough to justify their spot in the collection. Of the six, only Sonic the Hedgehog and, to a lesser extent, Sonic Chaos are worth anything in this day and age. The other four, honestly, weren't even that good to begin with. Nowhere is this more prevalent than with Sonic Drift, basically a half-assed attempt by Sega to jump on the Mario Kart bandwagon, which is easily the worst game on the collection, thanks to awful controls and an extremely limited draw distance. How it managed to spawn a sequel is beyond me.

The other three titles fare only marginally better. Sonic Labyrinth is an isometric title that mimics Sonic 3D Blast in all the wrong ways. He moves even slower than he did in that game (which says a lot), and the maze designs are often boring as hell, so there's simply not much fun to be had. Sonic Blast, the last Sonic game for the game gear (and, from what I've read, the last game gear game released in Japan, period), is a rather unsatisfying sendoff for the system. The game tried to incorporate pseudo-3D graphics on a system that just wasn't built to handle it, and the result is sluggish physics and a butt-ugly visual style. As for Dr. Robotnik's Mean Bean Machine, well, it's basically a straight-up port of the genesis version. That Sonic Team would include an inferior port of a game that was already included strikes me as downright lazy.

There are some glaring omissions from the disc. The most disappointing of these is Sonic CD, arguably the best Sonic game ever made. I understand the Sega CD system (which the game was originally released on) is not included in the disc, but it would've been nice to have a few games outside of the genesis and game gear. The last three games included on the disc, Flicky, Ristar, and Sonic 3 and Knuckles are all fun games, but unlocking them requires the task of playing one or more games 20-30 times apiece. Is it really worth playing sonics 1, 2, 3, and Knuckles 30 times to play Ristar? The choice is yours.

But let's not fret over what isn't there. The important thing is that the majority of what is there shows the little blue blur running at full speed. And to top it all off, there's a host of extras to keep the fans happy, such as character bios, comic book covers, and videos from Sonic Heroes. These goodies are really nothing more than a novelty, but when placed on top of the delicious main course, they make a nice and tasty dessert. It's a shame, though, that most of the content that's been added to make up the Plus of this port isn't really of much interest to anyone but the hardcore collectors. So, if you already own the original gamecube version of the title, the six game gear games really aren't worth the extra twenty bucks. Otherwise, it's twenty dollar asking price makes it an essential purchase for Sonic fans or anyone else who wants a nice slice of classic gaming at its best.