As a spiritual successor to 3D platformer Banjo-Kazooie, Yooka-Laylee really does capture the cheeky personality of its predecessor. It doesn’t introduce many new ideas, but it does rework the existing formula, creating a far less linear version of the N64 collectathon. Ultimately, though, bloated levels and a largely uncooperative camera keep Yooka-Laylee from being more than just a nostalgia trip.

The adventure begins when corporate president Capital B steals a book’s golden pages, called Pagies, from a lizard and bat named Yooka and Laylee. The pair figure that the Pagies must be valuable if someone would bother to steal them, so of course they decide to enter Capital B’s building to get them back. That hub area, Hivory Towers, splits into five themed worlds with a variety of collectibles to find, including Pagies, currency-like Quills, and powerups.

Yooka-Laylee is about finding collectibles first and foremost, and platforming takes somewhat of a backseat. You can find Quills out in the open, and you unlock Pagies by completing a variety of tasks, from solving simple puzzles to playing a round of golf to, of course, platforming. The focus on a wide range of activities instead of just platforming is actually a good thing, because the camera has a nasty habit of getting in your way when you're exploring levels. It locks into place at seemingly random points and even swings wildly in tough spots, making the platforming challenges that are there terribly frustrating and time-consuming. When most of your time goes toward the collectibles that are the least fun to get, that’s a problem. Once I unlocked the ability to fly for limited periods of time, I started cheating to completely get around tricky platforming sections. However, it’s worth noting that swimming doesn’t suck in Yooka-Laylee, and I didn’t dread underwater sections the way I do in Banjo-Kazooie. Movement in water is quick and easy, so exploring in and around water isn’t a chore.

I most consistently enjoyed the hub world, where the powerup collectibles are hidden in clever spots and the Pagies are locked behind challenging puzzles that make good use of the moves and techniques you pick up in the discrete worlds. Those worlds also have their strong puzzles, but they’re less consistent.

There are only five levels, none of which have a terribly original theme. The first world is “tribal”-themed, for example, which was also the case in both Banjo-Kazooie and -Tooie. The casino level is the weakest of the five; it introduces a new kind of collectible that can be exchanged for Pagies, adding an unnecessary layer to the collecting process. But the rest of the levels lay out their collectibles well, and finding all 200 Quills in a level always gave me a sense of pride.

In contrast to the established Banjo formula, each of the levels can be expanded once, and you can visit each of them in pretty much any order you want. That open structure allows you to control the pace of the adventure since you don’t have to stay stuck on a Pagie or puzzle--you can move on to another world where you might learn a move or strategy that will help you elsewhere. That also makes returning to a world you’ve already visited more rewarding. When you’ve found 20 of the 25 Pagies in a world and are sure there was nothing else you could possibly do to find the rest, coming back to that area with fresh eyes and seeing what you didn’t before is its own special kind of achievement.

The other update to the Banjo formula--being able to expand worlds--is less successful. Each of the base worlds is clearly incomplete, but expanding them doesn’t necessarily improve them. Because most of them have additions in multiple areas and directions, their layouts are hard to follow, and just figuring out where you haven’t been yet can be tedious. They’re hard to parse in the same way that N64-era levels were because they’re open-ish but sectioned off in unnatural places with no landmarks or visual aid to guide you. The snow level in particular is broken up into a bunch of areas that connect in bizarre ways, and even after several hours exploring it, I’m not entirely sure which caves connect to which parts.

Much like the level design itself, the boss fights in each world feel stale and outdated. Each boss up through the end of the game follows a very simple structure: you figure out their attack strategy, hit them a couple times until they change up that strategy, and repeat maybe three times until they’re dead. But since you don’t need all the Pagies to actually beat the game, these bosses are as optional as any other individual Pagie.

Coming back to a level with fresh eyes and seeing what you didn’t before is its own special kind of achievement.

20 hours of hunting collectibles and fighting simple bosses later, I had found the bare minimum amount of Pagies necessary to move on to the end of the game and couldn’t justify finding any more than that. The ones I hadn’t yet collected were not worth either the time it would take or the frustration I’d have to endure to get them.

I stayed as long as I did because of my own nostalgia. Although there aren’t references outright, Yooka-Laylee has plenty of Banjo parallels. The lizard-and-bat duo are nearly identical in personality to Banjo and Kazooie, with Laylee making the majority of the snarky comments and Yooka being the voice of reason. On top of that, the collectibles and moves are very similar in function to their counterparts in the Banjo games, and the music features many of the same familiar motifs. But Yooka-Laylee also lacks new ideas, and the twists it introduces aren’t entirely successful.

Ultimately, Yooka-Laylee’s best and worst aspects come directly from its predecessor. Despite attempts at modernizing the formula, its style of gameplay is still outdated, and it doesn’t stay challenging or interesting for long as a result. But if you’re looking for a faithful return to the Banjo-Kazooie formula, Yooka-Laylee certainly delivers--from the font to the music to the wealth of collectibles, it’s worthy of the title of spiritual successor.

View Comments (269)
Back To Top
6
Fair
About GameSpot Reviews

Kallie finished Yooka-Laylee in 20 hours and found around 75% of the collectibles using a complimentary code provided to GameSpot. She replays Banjo-Kazooie at least once a year. 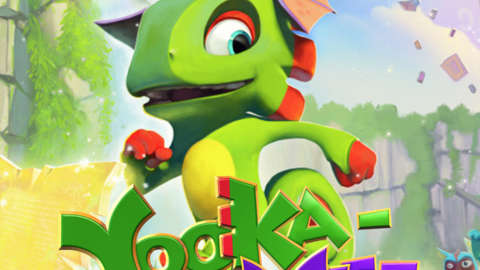 Yooka-Laylee is a 3D platformer from the creative talent behind Banjo-Kazooie.