Postmodern? It's set 20 years ago!

"Postmodern" is both an intriguing and an intimidating word. YIIK, pronounced "Y2K," comes with the subtitle, "A Postmodern RPG," but what does that mean? Is it a game centred around the tennis matches of Infinite Jest? Or around Andy Warhol's Campbell's Soup Cans? Regardless of the intention behind labeling the game as such, the postmodern tag initially seems a little peculiar.

However, when you boot up YIIK you're met with a stylish title screen that looks like it was ripped straight out of a retro arcade. The stunning visuals are accompanied by an electro-jazz bass-driven track that immediately asserts the game's homage to '90s pop culture. After a short exchange with a crow named Marlene, you're given control of Alex McHugh, college graduate and spoiled brat. You're also unemployed and spend your time wandering around your town aimlessly until you meet a cat with a Salvador Dali moustache. Shortly afterwards, an ethereal girl goes missing, triggering a chain of events that threaten the very fabric of reality itself.

YIIK plays as a turn-based RPG, but instead of a strength/weakness mechanic that's usually innate to most turn-based systems, YIIK uses a series of minigames to determine how much damage you deal and receive. Alex's basic attack sees him spin his favorite LP on a portable record player, which is lighthearted and amusing at first. However, as more characters and abilities are introduced to the game, the amount of minigames becomes increasingly more daunting.

Basic attacks become ineffective as the game progresses, leaving you to use special abilities that feature minigames spanning myriad genres. These special abilities are necessary to take down mid-game enemies, but because there are no instructions on how to play the minigames, the game's learning curve is both unfair and unsatisfying. Make a mistake and you'll deal no damage, so you'll likely need to die a few times before you get the hang of a new ability. There's a voice that narrates the battle dynamics when you dodge an attack or die that sounds like the aliens from The Simpsons, though, which is a small redeeming factor.

The defense mechanics aren't much better. Sometimes you can dodge if you nail a real-time prompt, whereas other times the most you can do is reduce the amount of damage you receive. One particular kind of attack, for example, targets your entire party of four and hits you like a truck unless you nail three timed prompts in quick succession, which is a lot more difficult to do than it might seem. Since this attack is used more frequently over time, it becomes a frustrating way to engage with combat. The battle pace is slow and the response to your inputs is clunky, making the battles themselves last for an unnecessarily long time. And the further you progress through the game, the more often you have to battle while traversing its many dungeons. Also, the real-time battle prompts are much better suited to a precise mouse-click than a button press, which is an issue on PS4.

The game's leveling system, meanwhile, is tied to the Mind Dungeon, which sounds a lot more intriguing than it actually is. Again, the Mind Dungeon gets maximum style points, quite literally being a dungeon located in the protagonist's head that's accessed by dialing a specific number. In the Mind Dungeon, the camera angle changes to a side-scrolling perspective. In order to level up, you need to select one of four doors on the current floor and choose one of six skills to increase. You then need to enter the room behind that door, which confirms the skill increase. All four doors can be used to increase a skill, meaning that you can increase four skills for every level. After all four doors have been used, you can speak to Marlene the crow at the staircase located on the opposite side to the side you entered on. After confirming the level up, you descend to the next floor, which has another four doors -- and so on.

The actual world of YIIK is stunning, though. Each map (apart from the dreary and awkwardly angled Wind Town) is designed with a gorgeous retro art style that screams '90s Nintendo, and the soundtrack is consistently killer. Hearing that Undertale developer Toby Fox helped with music production wasn't surprising at all, and the late-game vocal tracks in particular set the mood brilliantly. The art style and music set a ‘90s mood that's paired with a lighthearted tone, with the game being genuinely funny for the most part. One particular NPC unleashes a barrage of rubbish jokes, the last of which is, "Are you visiting from Seattle? Say hi to Nirvana for me." It's very silly, but it works in the game's favor.

However, YIIK's attempts at humor can also be very problematic. Characters call each other "spazoids," derived from the highly-insulting term "spastic," as a throwaway insult. At one point Alex even says, "That's our word" about the word "ginger." On another occasion, a character says, "You guys went into an epileptic fit," despite the fact that what actually happens doesn’t even remotely resemble that. These jokes don't land, instead creating an uncomfortable atmosphere. It's one thing to set your game in 1999 and use otherwise outdated terms in context, but it's another thing entirely to gratuitously use derogatory terms for comedic effect. The art style and characters already capture the era perfectly; drawing on the negative parts of the '90s for no reason doesn't add anything.

YIIK has a number of design and technical performance issues as well. The game doesn't perform very well on console for a range of reasons. For one thing, the movement mechanics are a real issue on console. With no invisible barriers, traversing narrow bridges from an isometric perspective with a PS4 controller's analog sticks usually results in falling off the side. Obviously pressing the D key on a keyboard will cause you to move right with precision, but the same can't be said of analog sticks unless you're willing to move at a snail's pace through a game that's already slow.I also encountered a game-breaking bug that could only be resolved by going back three hours to an old save file.

Although some aspects of the game can be called postmodern, YIIK tries a bit too hard to make itself smart, coming off as pretentious more often than not

In general, puzzles that are not complicated ended up being unnecessarily time-consuming. The puzzles in the early parts of the game are quick logic problems that are enjoyable and fit the style of the game like a glove. The later puzzles, however, are resolved with much more arbitrary solutions and, in my experience, are susceptible to bugs. For example, you are taught early in the game that one tool (Panda) is used to hold down pressure plates, while another tool (Dali) is used to activate inaccessible switches. Late in the game, you need to use Dali to activate a pressure plate while Panda is already in use elsewhere. However, you've been explicitly taught that each of the two has a role of its own--it's a bit cheap, really, and when I figured it out I felt dissatisfied, because it didn't fall in line with the logic that the game went out of its way to establish earlier. The solution was neither a clever implementation of the game's established rules nor a smart twist on those same rules.

Although some aspects of the game can be called postmodern--namely the character arcs and the writing--YIIK tries a bit too hard to make itself seem smart, and it instead comes off as pretentious. By self-consciously addressing itself as a game and including lines like, "How can an RPG be postmodern?", YIIK is postmodern in a basic sense, featuring nods to the critique of Enlightenment ideas of self-realization. However, it doesn't use this basis to communicate anything important later on. It never builds on its foundations. YIIK's reliance on the quirkiness of its content--such as Alex attacking enemies with a record player--means that it's not postmodern so much as it is a take on hipster culture.

YIIK opts for pointless "postmodern" jargon about the nature of objective reality and a person's soul over meaningful character development and ambitious experimentation with its form. On top of this, postmodern literary phrases are rattled off in contexts that are completely detached from their meaning, which can be perceived as postmodern in an edgy sense but definitely not an intriguing or challenging one.

YIIK's characters are intriguing at first, but they don't really develop until late in the story, so it's difficult to care about them. At the end of the game, Alex provides a summary of what has happened, and it's genuinely interesting. It's unfortunate that the game managed to kill that intrigue with its slow, tedious, and clunky gameplay. There are two endings, both of which are canon. The one I got is the one that most people will get on their first playthrough, and it's not good. The story doesn't resolve itself in any meaningful way and the last boss is designed as another arbitrary puzzle that's a bit much to be considered clever or fair. Also, the route to the end of the game involves a monotonous grind that feels like not enough butter scraped over too much bread.

Despite YIIK's stunning art direction, kicking soundtrack, and occasionally interesting plot point, it suffers as a result of its clunky combat, tedious grinding, and poor puzzle design. Postmodern texts aren't always enjoyable--Wallace's Infinite Jest features walls of text that list every chemical name for prescription drugs under the sun, spanning pages upon pages at a time. However, Infinite Jest has substance. For the most part, YIIK doesn't. 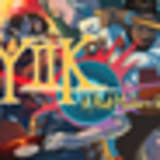 Cian took a module that delved into postmodernism while studying for his undergrad and has been an avid fan of RPGs since before he could even talk properly. Despite having high hopes for YIIK, his 35 hours of play amounted to little more than disappointment. Cian played YIIK on a PS4 using a code provided by the publisher.