Yggdra Union is more fun to say than it is to play.

Yggdra Union is an unabashed port of a two-year-old Game Boy Advance game. Its move to the PSP doesn't herald an overhaul of the rudimentary battlefield display nor does it spice up the skirmishes with graphical flashes. With a strict reliance on strategic battles over fancy visual flourishes, it has nothing to hide behind when the combat falters. There is a severe lack of depth in the battle dynamics, which makes this game more grueling and repetitive than a handheld war should ever be. Getting caught up in the rhythmic motion of combat can be hypnotizing at times, but the repetitious confrontations become predictably uneventful after a while. While Yggdra Union offers a unique spin on tactical combat, it lacks the creative spice that makes other games in the genre so captivating.

Trouble rears its ugly head in the kingdom of Fantasinia, and Princess Yggdra is on a mission to right the wrongs of her fallen world. As Yggdra, you amass a small group of plucky individuals to help you conquer the dark foes who hound you at every step. The core element pushing you through beleaguered towns and crumbling mountain passes is a holy sword that promises to bring justice to those who have hurt your people. The idea that this holy sword is guiding you on this quest to decimate anyone who opposes you proposes a dark question that you must answer for yourself: Is the sword truly special, or are you acting on your own accord?

The story is told so inexpertly, though, that this ominous decision feels slight. The characters are devoid of personality. A few crass comments interject some energy into their dialogue, but the characters predominantly settle on bland cries of either outrage or acceptance. Twists occasionally throw a stick in your spokes, veering you down a path that couldn't have been anticipated. These turns are not always for the better, though. During one maddening detour, you'll momentarily lose control of Yggdra and watch in horror as she undoes hours of your hard work. The turns the story takes are often illogical and serve to artificially lengthen your quest instead of provide much-needed substance.

A good third of the game is devoted to all-too-long story interludes that fail to provide the proper motivation to continue fighting, while the rest takes place on battlefields. Here you'll navigate your troops around a grid as you attempt to quickly quash your enemies. The battles are strictly turn-based, but unlimited preparation time is unnecessary since the battles are fairly simple. The most important strategy is setting up unions before battles. Unions are formed depending on where your allies are stationed. Battles can often be won by sheer force so taking as many people as possible into battle with you is the key to winning. If you overwhelm your enemies with numbers, you'll be able to quickly vanquish them and claim victory before they can make a dent in your plans.

As the game progresses, you'll often find yourself severely outnumbered on the battlefield, so smothering your foes under your massive weight isn't always possible. There is a rock-paper-scissors dynamic in effect, which means swords are strong against axes but weak against spears, but there are often too many skirmishes going on in one battle to let this strategy play out. The most important in-combat skill is knowing when to fight passively and when to let loose with all-out aggression. This is the only direct control you'll have over your troops in battle, and it's the key to swinging more difficult duels in your favor. There isn't much thought required as far as when to be passive and when to be aggressive, though. You'll need to fight passively at first, building up your combat meter, and then switch to aggression for the rest of the battle as you recklessly tear down your foes.

When your combat meter is full, you'll have the option to let loose a special attack. Before battle, you choose a card to play for that turn. The cards determine how strong you are, how far you can move on the battlefield, and which special attack you have access to. Unfortunately, the restrictions are so severe on the special attacks that you'll often have to fight battles without them. For instance, you can use your healing ability only at noon during the in-game day, and many cards are restricted to just one character, so the stealing card, for example, can be used only by the thief. This means that the majority of your fights will boil down to how you use the passive/aggressive meter, with only a few duels fully using the special abilities these cards offer.

There are neither towns to visit nor side quests to partake in. You are shuttled from one battlefield to the next, with no chance to wander down an uncharted path or to go back to previous battlefields to level up. This strict focus could have been an advantage if the strategy was deep enough to be constantly engaging, but instead it serves as a detriment because of the repetition of the battles. It's hard to distinguish one battle from the next, so the experience amounts to mindlessly forming unions and unleashing aggressive attacks, without any notable moments to make the experience memorable. Still, it is possible to be caught up in the rhythmic motion of battles. The sway of battle is almost soothing, making it easy to get lost in the rock-paper-scissors battles to decide the fate of the world. Despite the game's lack of any real strategy, it's rewarding to take down a particularly troublesome foe or deftly plow through a battlefield without losing a single person in battle.

Yggdra Union is a different take on the strategy genre. It places an emphasis on forming powerful unions on the battlefield while letting you manage your own aggression during fights. But the game doesn't evolve from its simple roots and unfortunately casts you in the same basic battle over and over again. The intoxicating rhythm is easy to get lost in, but it's impossible to ignore the archaic graphics and poorly developed story. There is a certain charm on this simple battlefield, but those looking for a serious challenge from their strategic endeavors should look elsewhere. 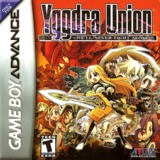