While it isn't that much different from the last SmackDown!, SmackDown! 2 makes enough incremental changes and upgrades to be significant in its own right.

It's been less than a year since the original WWF SmackDown! debuted on the PlayStation, and already its sequel, subtitled Know Your Role, is upon us. While it isn't that much different from the last SmackDown!, SmackDown! 2 makes enough incremental changes and upgrades to be significant in its own right.

The list of modes present in SmackDown! 2 is impressive. Outside of the standard one-on-one and tag matches, you can also set up all kinds of different match criteria, such as special referee (where the referee can take sides and really get involved in the match), iron man, ladder match, hardcore (which has a ton of options on its own, such as handicap matches), slobberknocker (an endurance match of sorts that puts you up against several opponents), anywhere fall, King of the Ring, Royal Rumble, survivor, casket match, cage and hell in a cell matches, and table match. There are also a few different ring environments, based on SmackDown!, Raw, and the WWF's various pay-per-view events. There are also several different backstage areas, including locker rooms and the like. Neither the game nor the manual does a good job of explaining some of the more esoteric match types, but a little bit of experimentation quickly clears up the confusion.

The game has a deep roster, and it's up to date with most of the WWF's recent costume and character changes. The Undertaker has his biker motif, and he even appears on a motorcycle in his intro. However, THQ must not have wanted to spend the extra cash to license the Kid Rock song that the Undertaker has been walking out to lately, because he enters the ring to the standard WWF theme song.

The game's main draw is once again its season mode, and THQ has made a few improvements to this mode. The between-match segues aren't perfect, but they're a lot more varied. Now, you'll see things like wrestlers getting jumped by unknown assailants, wrestlers using construction equipment to destroy trucks, and Vince McMahon coming out right before a match and changing the rules. Season mode is still the way to unlock wrestlers, but instead of the new superstars merely appearing at the end of a season, they're introduced in the season's storyline, usually by appearing as a special referee in one of your matches. Gone from the season mode is the ability to turn certain wrestlers on or off as you progress from year to year - the game simply chooses from the entire list of active participants, and it may even create a mystery wrestler from time to time. However, the season mode is not without its flaws. For starters, the game has some fairly horrendous loading times from the menu screens to the game engine, and having to sit through the load time just to watch a two second clip of a wrestler walking back and forth in the ring is a little tedious. Also, instead of being able to quickly skip matches that your wrestler isn't involved in, you now have to sit through a brief match simulation screen, which determines the winner via a system of life bars. One match isn't a big deal, but having to navigate through eight matches and a smattering of cutscenes just to get to the one bout you actually care about gets very old, very fast.

Smackdown! 2 uses the original Smackdown! engine, and its basic gameplay hasn't changed a bit. The game has a very arcade feel to it, with an emphasis on timing and ring movement rather than relying on external factors, such as crowd response or a momentum meter. At times, this gives the game an almost fighting game-like feel.

SmackDown! 2's graphics are roughly the same as those of the last game - so they still look pretty fantastic. The wrestler models are realistic in shape and motion, with excellent, lifelike animation. Squint during an intro, and you might be fooled into thinking you were watching an actual human being walk to the ring. The crowd is well animated and sports different signs depending on who is in the ring.

The game almost comes across as a nice complete look at the WWF, but one factor really ruins the mood: the sound. The game's sound is, for the most part, pathetic. Sure, the wrestlers' themes are played during the intro videos and season mode cutscenes, and the in-match sound effects are solid, but the lack of commentary is a glaring oversight that makes the matches not quite as exciting as they should be. When you take into account the fact that inferior wrestling games such as WCW Backstage Assault can deliver quite nicely in the commentary department, the lack of speech in SmackDown! 2 simply comes across as laziness on the part of the developers. Instead of commentary, you're stuck listening to a handful of annoyingly bad guitar tracks while you wrestle. Also, some grunts, screams, and vocal taunts from the actual wrestlers would have gone a long way to make the game sound better.

The create-a-wrestler mode in SmackDown! has given birth to a few different creation modes for SmackDown! 2. You can create your own taunts by selecting from a list of different character motions and piecing them together in a fashion not unlike Agetec's Fighter Maker. Also, managers and stables can be created. The create a pay-per-view mode has returned, and the create-a-wrestler mode from the first game has gotten a lot more interesting. You can keep it simple and select from preassembled parts, or you can really get into it and specify things like eye color, nose shape, tattoos, sleeve length, shirt color, and all the other little bits and pieces you'd expect to find. More and more parts for your created wrestlers are unlocked as you progress through season mode.

WWF SmackDown! 2 presents an excellent package, but you can't help but feel that any real innovations were sacrificed in an attempt to get the game on shelves before consumers started leaving the PlayStation behind in favor of newer platforms. The solid gameplay from the first game is there, and the game has more than enough modes to keep you entertained, but overall, WWF SmackDown! 2 is simply more of the same. 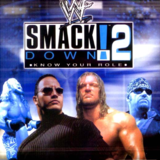