The latest entry in the long-running Worms series further refines the 15-year-old formula and is one of the best yet.

The Worms conflict has been raging for so long at this point that nobody can remember why it started or who fired the first shot. It's well documented that hostilities broke out some 15 years ago and that countless annelids have lost and continue to lose their lives, but why do they fight? No borders are being contested, no dictators have been overthrown, and there's no evidence to suggest that oil profits have anything to do with it. The answer then is perhaps that these worms fight for the very same reason that we continue to finance their war machines through game purchases: because it's fun. Worms was fun in 1995, Worms 2 was better in 1997, and despite a few missteps in the numerous iterations between then and now, Worms Reloaded is a blast in 2010. You don't need this game if you already have last year's near-identical Worms 2: Armageddon on the Xbox 360, but if you missed out on that one, this is most definitely a war worth waging.

Outside of some huge and occasionally humorous developments in weapon technology, worm warfare hasn't changed a whole lot over the years. Teams of up to four worms are still dropped into randomly generated, completely destructible 2D environments; battles are still turn-based; and the victor is still whichever team has the last worm standing. You control only one worm at a time, and typically each timed turn involves moving said combatant into a good position from which to launch an attack and then retreating to a position of relative safety to make the enemy's inevitable retaliation difficult. There are almost 50 weapons and gadgets in the Worms Reloaded arsenal, and while that number might seem daunting if you're a newcomer to the series, there's really nothing complicated at all about their use. The controls for both movement and weapon use could hardly be simpler, and a thorough "How to Play" option offers text descriptions of practically every aspect of the game, including the uses of individual weapons and gadgets.

If you're a Worms veteran, you'll likely find that much of the Reloaded arsenal is familiar, and you might lament the lack of favorite weapons from previous games, such as the old woman, the mad cow, the skunk, and the mole squadron. Despite some notable omissions, though, Worms Reloaded features one of the best and most well-rounded arsenals to appear in the series to date. The only weapons that you have an infinite supply of are grenades and bazookas, which aren't particularly powerful and require some skill to use effectively. Grenades can be tricky because not only do you have to get the strength and trajectory of your throw right, but you also need to set the fuses on them for one to five seconds. Bazookas, on the other hand, are challenging because their trajectories are affected by the wind, which changes direction and/or speed every turn. Most of the significantly more powerful weapons are much easier to use than these two, but the flip side is that they're generally available only in very limited numbers and, in most gameplay modes, must be collected from crates that are airdropped onto the battlefield.

The 14 new weapons (assuming you haven't played Worms 2: Armageddon already) include ferrets that actively seek out enemy worms hiding in underground tunnels, a sentry gun that stays in the world until it's destroyed and automatically targets any enemy that strays too close to it, and a totem that slowly leeches life from enemies while healing friendlies, to name but a few. Plenty of classic weapons can still be found in the arsenal as well, and the result is that no enemy worm is every truly out of reach. If enemies try to hide underground, for example, you might be able to drop a bunker buster or a concrete donkey on top of them or, depending on where you are in relation to the targets, reach them with a well-placed buffalo of lies or a skillfully steered super sheep. Thankfully the most powerful weapons in the game all have cooldowns associated with them, so there's no danger of everyone just spamming them as soon as a battle gets under way.

There's also no danger of battles dragging on too long, because in addition to the timer that's used for every turn, there's a battle timer that forces any remaining worms into a sudden-death situation by reducing their health to just one point after the timer has counted down to zero. And when that fails to resolve the battle in a timely fashion--normally because worms are hiding or are just on opposite sides of the map with few weapons at their disposal--the water that's at the bottom of every map starts to rise and instantly kills any worm that gets submerged. Even against AI enemies that are either so ridiculously accurate that they frequently land grenades on your worms' heads or so stupid that most of their attacks might more accurately be described as suicide attempts, battles are a lot of fun. Add some human opponents to the mix, either locally or online, and the battles become much less predictable and, as a result, even more fun. Ranked matches can only be played online between two players, but there are plenty of options that support up to four players, including one that doesn't involve weapons at all.

Most of the gameplay modes in Worms Reloaded are variations on the same theme. For example, Crazy Crates mode dramatically increases the number of weapons that are airdropped, while Warzone mode gives you access to almost every weapon in the game from the outset. Forts mode dispenses with the randomly generated environments in favor of player-chosen fort designs for each team, and Bodycount (previously available only as DLC for Worms 2: Armageddon) is a survival mode of sorts in which you take control of a single worm and must kill as many enemies as possible before dying. This mode starts out quite easy because the enemies spawn with significantly less health than you do, but as new worms arrive to replace those you've slain, the amount of health they have increases, making Bodycount an enjoyable challenge regardless of your skill level. Outside of the single-player Campaign mode, which features an interesting assortment of puzzle- and battle-themed challenges, the only other mode of note is Rope Racing. In this mode, up to four worms equipped with ninja ropes (used to grapple onto something and swing from it) race through specially designed levels to see who can reach the finish first. This mode isn't particularly interesting or entertaining, but if you're new to the game and are constantly amazed by how skillful experienced players are with the ninja rope (it's possible to use the floor rather than the ceiling as its anchor point), rope races aren't a bad way to practice.

The main difference between Worms Reloaded and last year's X360-exclusive Worms 2: Armageddon, other than the option to play with mouse and keyboard if you prefer it to the gamepad setup, is that there's an option to create your own custom levels simply by dropping image files into a folder. The game doesn't provide an easy way to distribute maps online, so this feature is a novelty rather than a game-changer, but with that said, it's extremely easy to send image files to any friends you want to play with, just not to strangers. The way that images are transformed into levels is extremely simple: parts of the image that are black are cut out, and whatever is left becomes the landscape. It could hardly be easier, and there's even a simple Paint-style program for creating and editing levels.

Custom landscapes certainly aren't reason enough to buy Worms Reloaded if you've already played the aforementioned X360 game, but other reasons to pass on this $20 game are few and far between. The occasionally amusing voice samples repeat frequently enough that they might become grating after a while, and online multiplayer games take longer than they should because a "waiting for other players" message pops up a lot between turns and hangs around until everyone's connections are ready to proceed, but outside of these minor complaints, Worms Reloaded doesn't do much wrong. Even the cartoony art style, which is still recognizable as that employed in the first game, defies its age and continues to impress with amusing animations and updated effects for water, fire, and smoke. Regardless of your feelings about the ongoing Worms conflict, your best bet is to become embroiled in it. 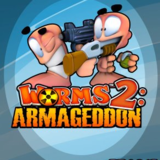