World in Conflict is a thrilling, spectacular strategy game, and an even better multiplayer experience.

It goes without saying that it's a good thing World War III didn't erupt between the United States and the now-defunct Soviet Union. For many of us who were children during the Cold War, the fear of being annihilated in a nuclear conflict was very real. So it's a bit strange now that we can look back at that era and have the luxury of imagining what could have been. Or we can play World in Conflict, Sierra and Massive Entertainment's incredible new real-time strategy game. This isn't your standard RTS game, as World in Conflict doesn't follow the familiar model of resource gathering, base building, and swarming armies. Instead, it feels almost like an action game masquerading as a strategy game, and it offers up a relentlessly fun and amazing new approach to the genre, one that works in single-player and even more so in multiplayer.

World in Conflict is set in an alternate-history version of 1989. Instead of the Berlin Wall falling and communism collapsing, the Soviet Union launches an assault on Western Europe, and the United States rushes its forces in to aid its Western allies. Four months into the conflict, after the US Navy has been attrited down, the USSR launches a surprise invasion in Seattle and pushes inland. In the 14-mission single-player campaign, you play as a company commander who is part of the meager US defense; there is no campaign from the Soviet perspective, though you can play as the Red Army in multiplayer. However, the campaign twists and weaves, letting you experience a sample of the European conflict, battle in remote areas of the Soviet Union, and bring the fight to New York City.

Yes, the story is a bit far-fetched, but World in Conflict does a great job of making the implausible seem believable. That's partly due to the excellent storytelling, which is spearheaded by pitch-perfect narrator Alec Baldwin. He's backed up by a great voice acting cast that brings the principle and secondary characters to life, along with a story that offers up emotional and sometimes humorous vignettes from a world at war. For instance, you'll hear a soldier's futile battle against Army bureaucracy, the phone conversation of a husband and wife, and the deliberations of the president and his top military advisors. While there's a small misstep or two, such as a gospel song in the weirdest of places, the game effectively tugs at your heartstrings, which is rare for a strategy game, especially when it concerns the fate of one character whom you presume to be entirely one-dimensional but isn't. Some of these vignettes are conveyed through in-game cutscenes, while others are delivered through graphic-novel-style drawings. World in Conflict also features some incredible prerendered cutscenes that are so good you actually wish there were more of them.

This isn't a hardcore wargame or simulation. There are far too many gameplay abstractions for that, from being able to air-drop reinforcements on the battlefield within seconds to repairing equipment almost instantly. Instead, World in Conflict is thrilling game about destruction. You get to unleash all the firepower of modern military units on an open battlefield, but you also get to experience the challenges of combined arms warfare. That's because the game has a great rock-paper-scissors combat system that captures the vicious circle of war. Tanks can kill tanks and other vehicles well, but aren't so good against infantry. Artillery can kill infantry easily, but aren't so good against tanks. Helicopters can knock out vehicles well, but are vulnerable to infantry and antiaircraft units. It's a constant chess match about what you need to bring to battle and how you use it. The game is also smart enough to limit the number of units you can control. Instead of commanding the entire battlefield, you'll have only a relative handful of units. This makes managing your units a lot easier, like when employing their secondary abilities such as popping smoke grenades to create cover when under attack.

Then there's the game's excellent resource system. You're given a pool of reinforcement points that you can use to purchase units. Naturally, the powerful units cost a lot more than weaker ones, so you've got to choose quantity over quality. But it goes a bit deeper than that, as different classes of units have different abilities. For instance, light helicopters are some of the best scouts in the game, able to locate enemies from a distance, but they're extremely vulnerable. Medium helicopters are able to shoot down other helicopters with their air-to-air missiles, but they don't do a lot of damage to armor. Heavy helicopters can eat tanks for breakfast, but aren't effective against other helicopters. So while your initial inclination might be to load up on heavy choppers and go after enemy armor, a wise player recognizes that there are many roles to play on the battlefield. If your units are destroyed, their cost is slowly refunded back into your reinforcement pool, so you can order up replacements, although veteran units are more effective, giving you an incentive to keep your experienced units alive as long as possible.

The nice thing about this system is that it effectively gives you an unlimited number or resources and units to work with, so it's fairly forgiving to nontraditional strategy gamers. If that seems a bit easy, don't worry, because World in Conflict can also ratchet up the pressure by tossing in time limits. For instance, you might have to seize a town in less than 45 minutes, or achieve another objective in far less time. The margins for error are much smaller when you're working under a deadline.

Aside from reinforcement points, the only other resource in the game is tactical aid points, which are accumulated whenever you perform a vital role on the battlefield. You earn points by killing the enemy, but you also earn points by seizing and fortifying objectives, repairing friendly vehicles, transporting infantry around the battlefield, and so on. Tactical aid is like the icing on the cake, because you can use these points to purchase all sorts of powerful and utterly cool things. You can call in air strikes, napalm strikes, cluster bombers, mortar barrages, artillery barrages, chemical warfare, airborne reinforcements, precision artillery, fighter cover, and much more. The ultimate tactical aid is also the most awesome one: tactical nuclear weapons. World in Conflict features the best-looking mushroom clouds in gaming, and when they go off the screen flashes white and you hear the high-pitched sound of electronics frying. It's essentially the chilling sound of death.

All of this takes place on large, dynamic battlefields that come alive with the symphony of destruction. Thankfully, there's barely any worry about collateral damage in the game, so if you have to destroy a city to save it, then don't worry about the insurance bill. The destruction isn't just cosmetic, either. There can be all sorts of tactical implications. Take out a bridge and you force the enemy to go the long way around, or, in a multiplayer game, to call in a tactical aid to erect a new one. If the enemy is hiding infantry in woods and buildings, making them hard to root out, call in napalm and just burn down the trees or use artillery or smart bombs to blow up the structures. Everything blows up so beautifully that there's no such thing as overkill anymore. The game looks spectacular in DirectX 9, and it's noticeably better in DirectX 10 thanks to more atmospheric lighting. If you only have a DX9 card, though, don't worry--you aren't missing out on any gameplay enhancements aside from the ability to use dual-monitor support in multiplayer games.

Pretty much everything in the game looks good, even up close. Move the camera low to the ground and you can make out all the gear on your individual soldiers. Pull the camera back and you can soak in vast landscapes. One thing the game does especially well is smoke. Drop a smart bomb on a building and it will not only explode in thousands of pieces, but it will send convincing pillars of black smoke skyward. After a heavy battle, the sky will turn black because there's so much smoke in the air. That's the incredible level of detail in this game.

As good as the single-player campaign is, though, it pales in comparison to the multiplayer game, which is fast-paced and wonderfully balanced. Imagine the first-person multiplayer action game Battlefield 2 reborn as a real-time strategy game, and you have an inkling of how World in Conflict unfolds online. This is an insanely fun multiplayer game that lets you be part of a team of eight as you attempt to destroy the enemy using teamwork and every tactical weapon in the book.

Everything about multiplayer is designed to get you in a game quickly and keep you there for hours on end. First, when you join a server there's no wait for the current game to wrap up before you can get into the fight. If there's a spot open on the server, you're deposited into the middle of the current battle when you join. Second, there's no downtime at all. In most RTS games, you spend the first several minutes hurriedly trying to gather resources and build a base and units. In World in Conflict, you order up your first set of troops and watch them parachute or airdrop in seconds later. Fighting unfolds within the first minute of each game, and it doesn't stop until the very end. Third, thanks to the resource system, if your units are wiped out you can order up some more and be back fighting within seconds.

Team coordination can be handled through a built-in menu system or, even better, the built-in voice-over-IP chat system that lets you communicate vocally with your teammates. All you need is a microphone. Playing in a relatively uncoordinated manner is still a blast, but if you play on a good team against another coordinated team, the gameplay elevates to a whole new level. Victory can be snatched from the jaws of defeat (or vice versa) in intense matches where both teams are hurling all on the battlefield, from air strikes, artillery, multiple tactical nukes, and more. There's nothing quite more urgent than a team desperately trying to cobble together enough tactical aid points for a last-ditch nuke.

View Comments (9)
Back To Top
9.5
Superb
About GameSpot Reviews 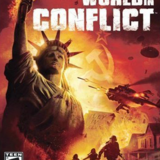