Wipeout fans should definitely give Fusion at least a rental, though they should prepare themselves for some bittersweet nostalgia.

The name might not carry the same punch that it used to, but the Wipeout series was arguably one of the most important properties for the original PlayStation. The series reached its peak with the sequel to the original game, Wipeout XL, which broke ground by imbuing a solid futuristic racing game with a cohesive sense of style that appealed to an older, savvier crowd. Though Psygnosis, the developer of the first three Wipeout games, has since been dissolved, the Wipeout series yet continues, with SCEE's internal Studio Liverpool picking up development duties. The end result is a serviceable futuristic racing game that is perhaps a bit too similar to previous installments in the series.

The fundamentals of Wipeout haven't changed since the get-go: You race in antigravity hoverboats around a mind-bogglingly serpentine racetrack at ludicrously high speeds, all the while using a variety of offensive and defensive power-ups to sway the odds in your favor. Wipeout Fusion makes a few tweaks to the formula by adding specific pilots to the mix, each with his own statistics that factor into your ship's performance. Plus, there's a host of new weapon pick-ups. The impact of the pilots is nominal, as it basically amounts to only slight variations for each ship design. The impact of the weapons is a bit greater, because somewhere along the line in the Wipeout series, fighting your opponents became as important as racing them, and this shift throws off the game's balance a bit. While it's been relatively easy to maintain a fast clip in previous Wipeouts, you'll find in Fusion that the other ships are so eager to bombard you (and each other) with the plentiful number of weapon pick-ups that it can be frustratingly difficult to preserve a satisfying sense of speed.

From Wipeout to Wipeout XL to Wipeout 3, the track design in the series has progressively gotten bolder and more grandiose, and Wipeout Fusion unquestionably has some of the most ambitious track design in the series yet. You'll go through barrel rolls, loops, tremendous drops, and, in the game's final levels, gravity itself can be inverted at the drop of a hat. The tracks in Fusion are also far less contained than in previous Wipeouts, and you'll find several points on each course where it's possible to simply fall off the track. The game uses Ridge Racer-style multitrack environments: Each level contains three courses, with common stretches of track shared among the three. Though this gives you a better sense of each environment, it can make the races a tad too repetitive.

The Designers Republic, the group responsible for the look and feel of Wipeout XL, has long since departed the series, and it seems that the game's sense of style left with it. The track design may have gotten more flamboyant, but otherwise, the game keeps its visual flash to a minimum. A few classic ships return in Wipeout Fusion, but none of the new ship designs are of the same caliber. The environments all look vaguely futuristic in a rather nondescript way, and at no point are the tracks terribly awe-inspiring; the most disappointing example of this is the fun but plain-looking levels that take place on the moon. Lighting and particle effects are used sparingly, but in the instances where they pop up, like dust being kicked up by ships in front of you or the shield-recharging station on the track, they look sharp. Slowdown and pop-up are also occasional issues for Wipeout Fusion, though they're more annoying than crippling.

Although the phenomenon of video games featuring licensed music is totally commonplace these days, Wipeout XL was one of the first games to do it, and with songs from then-new electronic outfits The Prodigy, The Chemical Brothers, Orbital, Underworld, and The Future Sound of London, it was a soundtrack that you'd want to listen to even when you weren't playing the game. The music in Wipeout Fusion consists of the same type of hard-hitting techno, with tracks from Orbital, The Future Sound of London, BT, the Utah Saints, and more, but the soundtrack just isn't as cohesive or inspired as past entries. The rest of the game's sound design is standard Wipeout fare; there's the low hum of the hoverboats, the coolly calculated voice of the announcer, and the roar of the crowd as you speed by a grandstand.

Wipeout Fusion has its merits, but at this point, there's no question that the series peaked out at Wipeout XL. The game suffers from no singular crippling problem. Rather, Wipeout Fusion's biggest shortcoming is its age. SCEE has been showing off Wipeout Fusion in some form or another since the launch of the PlayStation 2, and that comes across in the end product. Had it been released a year earlier, it likely would have received a much warmer reception. But the simple fact is that the Wipeout series really hasn't made any fundamental changes since the first game all those years ago, while other futuristic racers, like Extreme-G 3, have upped the ante with bigger, more dynamic courses, a greater sense of speed, and superior eye candy. Wipeout fans should definitely give Fusion at least a rental, though they should prepare themselves for some bittersweet nostalgia. 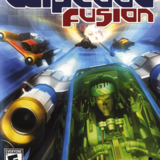