User-created routines and plenty of new activities make Wii Fit Plus a vast improvement on the original, although some important omissions stop it from being a standout.

Wii Fit Plus is exactly what it sounds like--a revision, rather than a revolution, of the 2008 game that almost single-handedly propelled the fitness genre into the mainstream. The core experience hasn't changed, but Plus is a big improvement over the original Wii Fit thanks to the ability to create your own tailored workouts and the introduction of plenty of fun new balance games. And while there are still some head-scratching omissions (and some questionable health advice), Plus' excellent integration with the Wii Balance Board peripheral and its solid presentation make it an ideal tool for those wanting to improve their fitness without having to trek to the gym or publically expose their downward facing dog in a yoga class.

While it's essentially the same game as its forebear--a series of muscle, yoga, and balance game exercises which (mostly) use the board peripheral--there are enough reasons here for those who bought the original game to dust off their balance boards and shell out cash for Wii Fit Plus. Extra activities are the most noticeable additions: Plus features three new yoga poses and three new muscle workouts, all of which are tailored for more advanced users and nicely round off the existing offerings (and bring the total to 18 yoga and 15 muscle exercises overall). While the actual number of exercises hasn't increased significantly, the way you access them within Wii Fit Plus has been given a positive makeover, making workouts a much smoother experience.

First, all exercises are available to try from the get-go; you don't have to unlock them, which was the case in the original. More importantly, you can now easily string together individual exercises into routines, remedying Wii Fit's most glaring omission. Plus comes with its own preset routines bundled into different target groups. The Form group, for example, has three routines (each made up of three individual exercises) which target hips and behinds, arms, and figures, while the Youth grouping targets posture, mind and body, and legs and hips. You can join these preset routines together to create a longer session, or better still, you can create your own routine from scratch. Plus allows you to create a session of up to 60 minutes in length, but it strangely lets you choose only from muscle and yoga exercises. Creating your own routine is a more-than-welcome addition, but not being able to include some of the more aerobic-heavy games such as Hula-Hoop, Jogging, or Rhythm Boxing seriously hamstrings Wii Fit Plus' effectiveness as a total fitness tool.

You may not be able to work up as much of a sweat as you'd like with your individual routines, but Wii Fit Plus does provide you with an excellent way of tracking your health plan's progress, even if it's still heavily reliant on body mass index (BMI) measurements. BMI is a widely accepted indicator of whether a person is overweight, but any health professional will tell you that it's reliant on age and muscle mass, points that Wii Fit doesn't take into account. You can once again set weight and BMI targets, and if you have a previous Wii Fit save, Plus will automatically transfer your history and goals. Plus also adds a calorie counter, using a somewhat complex measurement named METS to figure out how many calories you've burned while doing any of its activities. And in another neat addition, Plus also has a long list of foods and how many calories you need to burn to work off said food (which is either a great motivational tool or an easy way to get depressed once you see that 10 minutes of work only adds up to a boiled prawn).

By far the biggest addition can be found in the balance games section, with 12 brand-new games and three improved versions of existing challenges. Most of the new games are quite fun, offering more depth and challenge than the originals bundled with Wii Fit. Tilt City, for example, is a great test of coordination, requiring you to guide colored balls to their appropriate destinations by tilting three different platforms using the Wii Remote and by shifting your weight on the balance board. Snowball Fight is a Time Crisis-like game which sees you leaning left and right from cover and using the remote to shoot snowballs at opponents. Segway Circuit has you emulating a ride on the unique mode of transport, shifting your weight forward in an open course to try to pop balloons. And for golf fans, Driving Range lets you hit the range, and the balance board shows you the mechanics of your swing by tracking how your weight shifts.

Not all of the new additions are appealing. Obstacle Course at first glance looks promising, requiring you to run (lifting your feet up and down on the balance board), avoid obstacles, and jump onto shifting blocks (bending your knees and then quickly pushing up) in a Mario-like platformer environment. It's a great concept, but it's let down by the balance board, which often seems a step behind (literally) in realizing when you've stopped or started moving. The same controller inaccuracy also makes Perfect 10--where you have to swing your hips against large onscreen bumpers to create sums of 10 or 15--more frustrating than fun, occasionally failing to register the right direction where you're thrusting your hips. And Bird's Eye Bulls Eye, while not suffering from control problems, might be one that you end up avoiding simply because it requires you to shred your dignity by standing on the board and flapping your arms like a gigantic chicken.

While you could have family and friends play the balance games with you in Wii Fit, it was a fiddly process which required you to reselect and restart the game for every new player. Plus makes this process much easier, allowing multiple players to take turns on games. But just as the create-a-routine ability is oddly limited in Plus, so too is multiplayer, with only nine games selectable for group fun.

Wii Fit Plus' presentation is the same as in last year's game, which is to say it's clean, clear, and pleasing to the eye. The generic male and female trainers are back to help you (and sometimes goad you into activity), as is the cartoon balance board, which serves as a guide to all of the features of Wii Fit Plus.

Wii Fit was already a decent attempt at bringing fitness to a home console, and Plus improves on it by being more user-friendly and adding even more activities. It's still lacking some much-needed functionality--such as being able to choose from any exercise in your own routine and having better multiplayer options--but for its bargain price of $19.99 (A$29.95) just for the game, Wii Fit Plus is hard to beat, particularly for those who need an excuse to break out their balance boards. 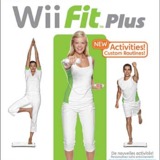 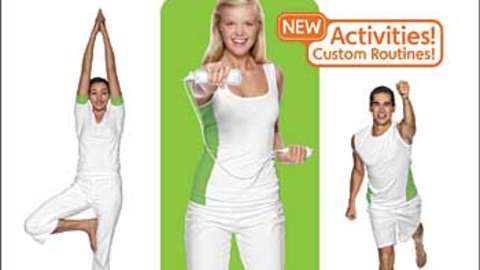 Wii Fit Plus offers a range of new exercises and balance games including Skateboarding and Rhythm Kung Fu.