The Wii and WarioWare are a perfect match.

Games this crazy shouldn't be this popular, should they? Video games that have you carefully guiding fingers into giant polygonal nostrils, slapping sleeping people until they wake up, or grating cell phones to bits with a cheese grater are meant to be niche games for weird kids, aren't they? Whatever...there's no sense in overthinking it because WarioWare is a fantastic series that gets even better on the Wii with Smooth Moves. As you might expect, this game is totally built around the Wii Remote and maintains, if not surpasses, the level of absolute random insanity that has made the whole series so appealing. It's a terrific use of the Wii's unique control features, it looks amazing, and in short, it should be a part of your library.

The game opens with Wario stumbling upon a temple that contains a mystical, suspiciously Wii Remote-shaped item known as the form baton. From there, the game progresses as the series has always progressed. You select one of the residents of Wario's fair city, and a brief, nonsensically charming intro animation plays. These animations are great, are occasionally funny, and look really fantastic. The smooth edges on the characters really stand out and give the whole presentation a very cartoonlike vibe. These intro sequences also set up the action a bit, but there's no way of preparing for what happens next.

The game comprises more than 200 "microgames." Yes, these are smaller than minigames, and you usually perform one quick, decisive action, such as sawing through a log, twisting a maze so that a ball drops out, making Mario jump up and get coins, and so on. So each game lasts only about five seconds or so. The catch is that you don't know in what order the games are going to come at you, and as you play, the whole game speeds up. So it starts out nice and easy, but gets progressively more difficult until you finally snap, run out of lives, and run away from the Wii, frothing at the mouth. Each game uses the Wii Remote in a specific way and requires you to hold the Wii Remote differently. These holds, called forms, are displayed for a second or so before each game starts, giving you time to orient yourself properly for the upcoming game. The forms themselves can be pretty funny. You start out with the most common form, the remote control, where you hold the Wii Remote normally. But you'll also hold it sideways for tilting in a driving-like motion, or with both hands on it like bike handlebars, or up to your nose for the elephant form, or even on top of your head for the mohawk. One form even asks you to put the controller down for a few games, like one that has you answering a phone. The forms are a big part of what makes the game so cool, and it's nice that there are a lot of them. After playing through the main game, you'll unlock a form called the diner, which also requires you to use the Nunchuk attachment.

It's the variety in the microgames that keeps the game feeling fresh. Like in previous WarioWare games, one section of the game is largely based around microgame versions of classic Nintendo titles. But because this is a Wii, and not a DS, the range of these games has greatly expanded. Many of the old games you'll encounter here are GameCube games. So you'll get a quick burst of Animal Crossing, which is a fishing game. Or you'll tilt the controller to make Samus roll around and knock over a barrel in a Metroid Prime-themed game. There's even a Wind Waker game. But there are also plenty of games from earlier eras, including Punch-Out!!, Star Fox, and Super Mario Bros. While the nostalgia is nice, the rest of the game also has plenty to offer. Have you ever wanted to shake bugs off of a banana? Hey, who hasn't?

Playing through the main game and seeing the story sequences is a pretty easy task, especially if you're familiar with the series and how it plays out. You can easily blast through it in a couple of hours. Of course, seeing the credits isn't really the end of the game because you'll have seen only a fraction of the available microgames. Once you've beaten an area, going back to it puts it into an endless mode where you see how long you can play before running out of lives. You'll also unlock modes that throw together all of the different games into one big jumble, as well as more dedicated games, such as a behind-the-back, polygonal rendition of Balloon Fight's balloon trip mode. The game also has four multiplayer modes, which serve up the different microgames in different ways. All of the multiplayer modes are pass-and-play, using only one Wii Remote. This allows you to have up to 12 players in some cases, but because you'll be frantically passing the controller around, Nintendo's constant dedication to making sure that you're wearing that wrist strap just seems impractical here, if not entirely impossible. There's just not enough time to take off the wrist strap and pass the remote to another player, who then has to put the wrist strap back on, all before the next game begins.

In a technical sense, some of WarioWare looks like absolute garbage. But that's only because there's such a huge variety of very deliberate visual styles in the game. You never know what sort of look you're going to get when the microgame appears. Will it be an 8-bit game from years past? Some kind of crude polygonal rendering of a pencil being sharpened? Clip-art-like monkeys that dance when you shake the controller? Combined with the amazingly sharp 2D graphics of the intro sequences, this is a fantastic-looking game, especially in 480p, which makes the look quite crisp. The audio in WarioWare is just as manic and varied as the rest of the package. Each game will have some of its own music and sound effects, ranging from simple blips and bleeps to the sound of a stick hitting a guy who's trying to steal some food.

The WarioWare series has never come at a more perfect time. With the Wii just getting established, a game that shows off the range of motions you can accomplish with the Wii Remote is a perfect companion. But it's more than just a demonstration of the Wii's technology; it's also a terrifically charming, funny, and nefariously addictive game that you can play alone. But it gets even better when you have a crowd on hand to witness the weirdness with you. 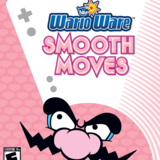