WarioWare Gold Review - Worth Its Weight

WarioWare, one of Nintendo's strangest and most inventive series, tasks players with completing increasingly quick and difficult 'microgames,' each just a few seconds long. It's a pure expression of one of Nintendo's strengths--its games are often overflowing with abundant ideas that are all quickly experienced and equally strong. WarioWare Gold is positioning itself as the ultimate WarioWare experience--one that mixes together the three play styles that have defined the series' previous handheld releases.

The 300 microgames are split between Mash games (which use the D-Pad and A button, like in the Game Boy Advance original), Twist games (which are controlled by tilting the console, à la WarioWare: Twisted!), and Touch games (that use the touchscreen, like DS launch title WarioWare: Touched!). There are also a handful of games that make you blow into the microphone, making the playlists that incorporate them slightly more embarrassing to play on public transport. Just under 40 of these microgames are new, with the rest being pulled from previous games in the series.

When you start one of WarioWare Gold's microgame playlists, you'll be hit with a cavalcade of tasks in quick succession. In the space of a minute you might find yourself hammering the A button to snort up a dangling snot bubble, using the D-Pad to guide Wario as he jumps on Goombas, or navigating a short maze to find a treasure chest. You could be tilting the system to ward off samurai attacks or to extract a dead tooth from an open mouth; if your stylus is out you might be guiding a needle through a thread on the touch screen or slicing flying food, Fruit Ninja-style. You'll be given a very brief instruction at the start of each game ("Avoid!," "Stack!," "Remember!"), and a few seconds to decipher and complete the task.

In Story Mode, each supporting character is given a playlist with a control type and game theme. Most of the games are divided between Sport, Fantasy, Nintendo, and That's Life (essentially miscellaneous) categories, although these are mostly aesthetic distinctions, as a lot of them play similarly. When you select a playlist for the first time you only need to beat a handful of microgames and the character's Boss game--a slightly longer, more involved event that is closer to minigame than microgame--to clear it. The next time you play, you're going for a high score, with the games increasing in difficulty and speed as you go. The Nintendo-themed retro games are a highlight, as always, although the boss levels for the Mash and Touch playlists are disappointing (thankfully the tilt-controlled version of Super Mario Bros. you'll get to play in the Twist section is fantastic).

You can comfortably complete every character's playlist and "finish" the game within two hours, and unlock all the microgames in five, but WarioWare is all about the long tail. Over time you'll want to build up familiarity with each microgame to get a high score--the best way to succeed is to immediately know what to do when the instruction pops up. There's a lot of repetition involved, but thankfully it's extremely fun. The three WarioWare games that Gold most directly pulls from--the original GBA game, plus Twisted and Touched--were all fantastic in their own ways and having all three play styles in a single game is a delight.

The challenge playlists that unlock after you beat the story, which allow you to play microgames under numerous different conditions, offer even more immediate thrills than the story playlists, which can take a while to heat up. Playing with only a single life, or testing your mettle in a mode where games switch between the upper and lower screen with very little time in between, can be tense and exciting. Sneaky Gamer mode, the one excellent mode from Game & Wario, returns here too. In this mode, you play as series staple 9-Volt, who plays microgames on the bottom screen but must occasionally hide under his blanket on the top screen if his mother comes into the room to check if he's asleep. Keeping track of your game progress while also looking out for the telltale signs that your mum is about to burst into the room is a surprisingly nerve-wracking experience. There's great variety in these lists, and you can choose which control styles you want to focus on--in the extremely fast Very Hard challenge mode, for instance, you're given separate leaderboards for Mash, Twist, Touch, and Ultra (which mixes every control style) modes.

WarioWare is also where Nintendo lets its freak flag fly, and Gold gets beautifully weird. The artists interpret Wario in different ways throughout the game--one microgame might render him in janky polygons, while another might draw him as a downtrodden everyman working in a factory. He might be fat, thin, or absurdly ripped--it feels like each microgame was designed with a huge degree of artistic and creative control. The cutscenes before each chapter in Story mode are legitimately funny--WarioWare has a firmly established cast of characters, all of whom have separate personalities and backstories, and they're a delight to watch. Wario is given far more spoken dialog than is typical of Nintendo's characters, too. You'd be hard-pressed to find another game with so many lines delivered by Charles Martinet, who imbues Wario with a sense of pride and malice here that's a delight to witness. You can also unlock the ability to redub each character's intro and outro cutscenes with your own voice, which is perfect for anyone who thinks Wario doesn't swear enough.

Outside of finding all the microgames, there's a long list of extras to unlock within WarioWare Gold. They're available through what is essentially a loot box system, although, thankfully, it only uses currency earned in-game. You can spend coins to crank the handle on a capsule machine, which will drop one of several prizes ranging from oddities (character-themed alarm clocks and collector cards) to educational props (a gallery of past Nintendo consoles and inventions), through to more enjoyable and substantial offerings, including soundtrack albums and larger, more fleshed-out minigames. Those minigames vary in quality and complexity, but a few of them are truly great, and they're really what you want every time you crank the wheel. While there's a lot of filler in the capsules it's also not too difficult to earn coins, which are handed out through regular play and whenever you achieve any of the goals set out in the game's Mission screen (which include several demanding high-score goals that should keep you engaged for a while). This means unlocks are tied to persistence rather than skill, and that anyone who sticks with the game for long enough can reasonably unlock everything.

WarioWare Gold might not be entirely new, but it's the best representation available of what makes this series special. It's a true greatest hits package that showcases Wario's unique weirdo vibe, and this style of play remains inventive and thrilling 15 years after the original Game Boy Advance game. We're still hoping for an entirely new title on Switch in the future, but for now Gold is a compelling, generous victory lap. 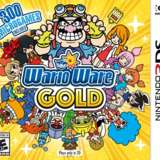 James O'Connor played the original WarioWare religiously, mastering every microgame to unlock Pyoro 2. He spent 12 hours with Gold, building up his high scores and playing every single microgame. A review copy was provided by Nintendo.