This microgame collection includes dozens of games, but its focus is on empowering you to create your own.

If you've ever had the desire to develop your own game, or you're someone who can't play an existing game without thinking about ways it could be improved, WarioWare DIY might be just the creative outlet that you've been looking for. That's because in addition to the dozens of included microgames that you can play back-to-back at a frenetic pace just as you would those in any other WarioWare collection, this sizable offering includes powerful but accessible tools for creating and sharing your own. It's true that these games are limited in scope and will be played for seconds rather than for hours, but getting them to play exactly as you want them to can still be an enjoyable challenge, and hey, even the world's best game designers had to start somewhere.

Many of WarioWare DIY's included microgames need to be unlocked before you can play or reverse engineer them, and you need to spend time exploring all of the game's features in order to get all 90 of the games. The menu system can take a little figuring out, but it makes a lot of sense once you spend some time with it. The main menu takes the form of a small town where any of five different buildings can be tapped to access submenus. The DIY Studio is home to the Super MakerMatic 21 machine used to develop microgames, record soundtracks, and pen four-panel comics--all of which can be enjoyed up the street in the DIY Shop. The Distribution Center is where you go to share your creations with other players (or with the WiiWare game WarioWare DIY Showcase), the Options Garage is exactly what its name suggests, and the WarioWare Inc. building is your one-stop shop for tutorials and freelance work. It's also where some of the game's most interesting challenges are waiting to be unlocked.

The first time you visit WarioWare Inc., there are only two options available to you: You can work as a freelance artist creating sprites for games that are otherwise finished, or you can take lessons in game development. Freelance work is fun because it familiarizes you with the simplistic graphics tools and also affords you a very quick way to see some of your creations in action. At the start of each freelance project you're presented with templates that clearly show what Wario is after, but you're also told that you're free to completely ignore the templates if you prefer. You might be asked to trace pictures of rabbits with and without crossed eyes to appear in a whack-a-mole-style game but instead opt to fill their roles with zombies whose heads cave in satisfyingly when you hit them, for example. The "DIY 101" lessons are much more time-consuming but do a great (if occasionally long-winded) job of introducing you to the concepts of AI (action items), triggers, switches, win conditions, and the like as you're taken step-by-step through the creation of three microgames. Finish those, and you gain access to the Assembly Dojo, where you're presented with 32 work-in-progress games and asked to finish them with only minimal guidance. One, for example, requires that you create an AI for a car that causes it to move when tapped, but only if the onscreen traffic light is green. Completing these occasionally challenging projects is extremely satisfying, and if you can make it through all of them, there's no doubting that you're ready to create your own microgames from scratch.

Starting out with a completely blank canvas is pretty daunting, but if you have a realistically achievable game idea in mind, you shouldn't have too much trouble realizing it. In part, that's because you're forced to approach the creation of each game in a regimented way. You start out with a background image, you create and animate objects (with placeholder or clip art if you prefer), you create behavioral AI and triggers for those objects, and then you figure out where the stylus comes into play and what's required of the player to win. Even creating the AI and triggers for objects, which is the most complex part of WarioWare DIY game creation, doesn't take long to figure out, because the way it's presented is so user-friendly. Every menu is stylus-driven, and you're rarely presented with more than six options at any one time. The only tricky part is figuring out how to use these options in tandem with one another so that a simple tap of the stylus in-game can simultaneously cause an object to switch to a different animation, play a sound effect, and alter its movement, for example. Impressively, you can instantly test your game at any time during the creation process, which is not only extremely useful, but just might give you a new level of appreciation for the work that professional game designers do--especially if you "ship" a game and then realize that there's a problem with it.

Similarly, the musicians of the world who work on games may earn your respect if you take some time to compose your own microgame music. Like every other aspect of the game, WarioWare DIY's music creation tools are accessible enough for anyone to use, but the catch is that if you're a talentless noise polluter with little or no understanding of how music is composed, that's not likely to change. With that said, the barrier to entry has been set about as low as it possibly could be, because there's an option for you to generate a string of notes simply by humming into the microphone. You're then free to reposition these notes using the stylus and, if you're feeling confident, work them into multi-track recordings. With the tap of an onscreen button you can decide which of around 50 different instruments you want your piece played on, and your choices range from conventional (piano, trumpet, wood flute, electric guitar) to downright strange (fat robot, baby, monkeys, pig). And if even that sounds like too much work, you can just have the in-game composer create songs for you, either completely at random or while adhering to a theme and style of your choosing.

WarioWare DIY's world is presented as a simplistic microcosm of the games industry, so when you finish a game you get to have some say in its packaging and cartridge design before it ships and appears on the shelves of the DIY Store alongside any other games that you've unlocked or created. When you ship a game, you also have the option to share it with friends. This works just fine if you're sending games to and from handhelds in the same room, but sadly the online functionality is limited. In order to share games online, you first need to exchange 12-digit friend codes with any other players (up to a maximum of 50) you wish to share games with. Then, you upload finished games to your online warehouse, from which your friends are free to download them at any time. Inexplicably, your warehouse has room to stock only two games simultaneously, along with two comics and two soundtracks. It's a real shame that there's no way to have more space in your warehouse or, at the very least, to use the six spaces that you're allocated any way that you choose. If you're a prolific game designer, there's no reason you can't design a dozen or so microgames in a single day, and if you're a talented musician, perhaps you can use WarioWare DIY's straightforward editing tools to create soundtracks for friends to use in their games. You never need more than two warehouse spaces, provided you keep in touch with friends and let them know when the items they want to download are available, but the lack of online storage and any in-game means of communication are just two more hurdles that you need to overcome to get the most out of the already convoluted community aspect of this game.

Even if you don't have friends who are playing the game, there's still some benefit to going online with WarioWare DIY. Free games are being made available for download on a weekly basis, including a number created by big-name designers like Yoshio Sakamoto (co-creator of the Metroid series) and Masahiro Sakurai (creator of Kirby). Furthermore, regular competitions to create games around a given theme can potentially expose your creations to a large audience because the best entries are made available for download to anyone who visits the in-game store. Add these downloaded games to the 90 that are included on the cartridge, and you're not likely to get bored with WarioWare DIY soon, regardless of whether you're looking to learn from other people's creations or just enjoy them.

WarioWare DIY is a great WarioWare game if you're a fan of the series, but it's also much, much more than that. The included creation tools are user-friendly enough that anyone can work with them, but they're not so dumbed down that you feel like they're doing the work for you. There's even more fun to be had solving design-related challenges for these games than there is playing them, so if you have even a passing interest in making your own games, you'd do well to pick up a copy. And if you don't, you should still get a copy just so that you can enjoy the fruits of everyone else's labors. 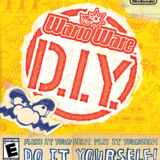