Mark of Chaos captures the fantasy combat of the Warhammer franchise in a beautiful way, but it's marred by some technical issues and a basic strategic campaign.

Orcs and elves have been done so many times at this point that it's easy to be jaded about the arrival of yet another fantasy game. So it's a credit to Warhammer: Mark of Chaos that the game makes you sit up and pay attention when its gloriously detailed 3D units come up onscreen. This strategy game, based on the popular Warhammer Fantasy Battles miniatures game, is a visually impressive affair, though the first chapter in what will probably be a long-lived series doesn't quite live up to its own potential and is saddled with some frustrating technical issues.

With its beautiful real-time 3D battles, it's natural to want to compare Mark of Chaos to the popular Total War games, which have the same sort of epic battles, only with real-world historical units instead of fantasy ones. And, like the Total War games, Mark of Chaos comes with a turn-based campaign to tie those battles together. Unfortunately, the campaign in Mark of Chaos doesn't feature anywhere near the amount of strategic depth or replayability of Total War. There are two campaigns to choose from in Mark of Chaos. One lets you play from the perspective of the mostly human Empire and its elven allies. The other lets you play as the forces of the orc-heavy chaos faction and its skaven allies, which are essentially humanoid rodents of unusual size. Those four factions are the only ones in the game, which doesn't come close to the number in the miniatures game, but at least there are three variants of each faction. Plus, we must admit that there's something almost sinisterly cool about the Empire faction and the Germanic undertones in its reiksguard units and elector count heroes.

Both campaigns are very linear. All you do is move one army along a predetermined path and engage in scripted battle after battle. Along the way, you'll need to assist a besieged city, crush an encampment of enemy forces, and engage in a one-on-one duel against the enemy hero. There's an occasional branch that happens every now and then where you can pursue an optional mission, but for the most part, the campaign map gives you the illusion of control as you move your army to the only place on the map where it can go. It doesn't help that the map itself is incredibly dark and plain, to the point that it's usually just a brown background. Even the story is drably told, as it's conveyed mainly through static dialogue screens with obligatory growling voice acting for the forces of evil and haughty voice acting for the forces of good. This seems like a lost opportunity considering the incredible prerendered movie that opens the game; it's so amazing that you want the designers to stretch it out to a 90-minute movie and put it in theaters.

While you don't have much choice in the direction of the campaign, you do have some bit of strategic-decision making in the composition of your army. You can recruit different types of units in towns and cities and then outfit those troops with better weapons, armor, and siege gear, as well as banners and musicians that help boost troops' morale in battle. Or, you can also get your troops blessed at a temple, which grants them various protections. And when you do arrive at a battle, you have to decide which troops to take into the fight, as you usually have more troops than battle slots. This involves deciding what kind of battle you want to fight. Do you want to rely on ranged weapons such as bows, axes, or muskets, or do you go for a heavier force and rely on swords and spears? On top of this, your troops gain veterancy the more they fight, which means you want to preserve as much of your force as possible in each battle. Veteran units are both tougher and much larger than green units. You can replace losses after a fight by purchasing them in your army camp, and there's usually enough gold salvaged from each victory that you can restore your losses and purchase a few upgrades.

In addition to army units, you'll manage hero units throughout the campaign. Heroes are just that: powerful individuals who lead your armies and engage in one-on-one duels against enemy heroes. Heroes gain experience over time, and those experience points can then be invested into three areas. You can boost a hero's command ability, which means that if you attach a hero to a regiment, the hero can use special skills to boost the fighting abilities of the regiment. These range from a special magical shield that grants protection to each man in the unit to flaming weapons. You could also invest those points in dueling skills, which make the hero more effective in those one-on-one duels. Or, you can invest those points into fighting skills, which make the hero more powerful in general battle.

Heroes can also be equipped with weapons and equipment salvaged from the battlefield, like magical swords, mystical armor, or protective rings. They can also use special one-time potions and scrolls that might restore health or mana (used to power abilities and spells). However, you can't easily trade any equipment between heroes, which can be annoying. For example, your mage might accidentally pick up the heavy armor that your warrior hero could use, but there's no way to readily transfer the armor from one hero's inventory to another.

All of this, of course, builds up to the battles themselves, where the units come to life onscreen and fight. Since it's based mainly on medieval warfare, many of the base tactics remain the same. For instance, spearmen don't do well against swordsmen, but they're handy against cavalry. Archers aren't great in a swordfight, so you stick them in the rear where they can rain their arrows down on the enemy. The Warhammer universe adds to this by introducing lots of really cool and weird units. The Empire has gunpowder units, so you have early riflemen and canons, while the chaos forces have twisted demons and even stranger creatures lumbering around the battlefield. Then there are the aerial units, such as weird harpies, majestic eagles, and more. Mark of Chaos' mix of fantasy and medieval influences makes for a compelling sight.

It isn't just kill or be killed on these battlefields, either. The game models morale, so if you inflict enough damage on a formation, the survivors will break and flee in terror. You can upgrade and bolster your force with various spells, and you have an active role on the battlefield, giving orders to your units and your heroes. Control is fairly simple, as you simply select units and use the context-sensitive menu to issue movement or attack orders. About the only issue we had in terms of control was trying to put a rein on our siege weapons, such as cannons, as they inflicted as much damage on our own forces as they did the enemy.

The battles are certainly the strongest part of Mark of Chaos, and the campaign feels like a tutorial of sorts to the various forces and tactics that you'll use outside of the campaign. You can create skirmish games against the computer (though you have to do so using the multiplayer setup), but the real meat is in the multiplayer mode, which emulates the setup of the miniatures game. You can create your own army formations and even multiple armies conforming to the different "point sizes" in the game. To keep the games balanced, each side has the same number of points to build their armies. The more powerful a unit, the more expensive it is, but even if one player selects an army consisting of a handful of high-powered units, it all balances out because the other player could go for a larger army of weaker units that cost the same amount of points.

Like the miniatures game, Mark of Chaos lets you create and customize armies to your liking. Fans will appreciate that the virtual units in Mark of Chaos are as detailed as the real-world miniatures. And Mark of Chaos avoids the entire "clone" armies that plague some games by giving you a variety of individual looks for each formation. Meanwhile, the army-builder tool will let you customize the colors for all of these units, so you can create your own distinct armies.

In terms of modes, there's the standard deathmatch-style free-for-all, but more interesting are the siege and reinforcements battles, which feature special capture points on the map that let you generate gold, which can be used to purchase fresh units that arrive on the edge of the battlefield. These battles can go on for much longer than a regular fight, since both sides have to maneuver their units to seize and hold points on the battlefield, and the sudden arrival of reinforcements can turn the tide of battle. Multiplayer battles can be intense, nail-biting affairs. Unfortunately, trying to connect to a multiplayer game is an exercise in futility, thanks to various glitches with the login and account system. We still couldn't log in even after we patched the game, and we tried creating new accounts and using existing ones to no avail. Thankfully, the game does support network play over a LAN.

Connection issues will eventually be fixed, but it's disappointing that issues as serious as these made it through development. Once they're addressed, Mark of Chaos should appeal to the sizable Warhammer community, thanks to its battle system and beautiful visuals that capture the essence of the tabletop game. The rest of the game doesn't quite measure up to the quality of the battle systems, but technical issues aside, Mark of Chaos represents a promising first step. 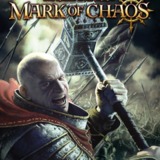 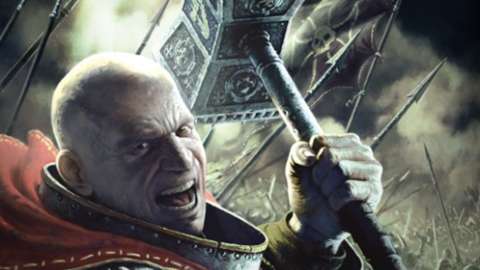 Namco is publishing the next installment in the Warhammer fantasy wargame series.