This terrific update to one of the best sci-fi real-time strategy games in years packs in a great strategic campaign and a grand total of seven different armies.

Hot on the heels of its outstanding new real-time strategy game Company of Heroes, experienced developer Relic is back with the second expansion to its excellent 2004 game Warhammer 40,000: Dawn of War, and it's a great update. Dark Crusade introduces two interesting and powerful new factions to Dawn of War, raising the total number of different playable armies to a whopping seven. It also features a new strategic campaign structure that lets you direct any of these seven sides in a massive war for planetary supremacy, with shades of the classic board game Risk. Some new units for the returning factions and plenty of new skirmish maps are also included, and you don't even need to own Dawn of War or its first expansion pack to enjoy most of this (you only need the previous games to unlock the older factions specifically for use in multiplayer matches; you have access to every race when playing solo). What with all that it has to offer, Dark Crusade comes across as much more than your typical real-time strategy expansion pack. It's one of the best RTS games around strictly on its own merits.

For the uninitiated, Dark Crusade's gameplay does a great job of putting the focus on vicious front-line combat by forcing you to quickly send out squads of powerful soldiers to claim strategic points spread across each map. Relatively little time is spent building up a base, so you'll wind up focusing your energy and attention on managing the game's exciting, gory battles. You'll command mighty infantry squads as well as deadly vehicles, and though most units do a good job of acting autonomously when engaged, you'll need to carefully use special abilities and keep an eye on your soldiers' morale as they fight. The design concepts introduced in Warhammer 40,000: Dawn of War later found their way into Company of Heroes in improved form, but don't expect all those changes in Dark Crusade. For the most part, though, the gameplay still holds up extremely well, as do the game's detailed, imaginative visuals.

Dark Crusade takes place on the planet Kronus, a mysterious world that's drawn out all these different unfriendly factions to set up camp all at the same time. This stroke of fortune promises many brutal battles to come. None of the factions intend to share the planet, not even the imperial guard and the space marines, who've arrived with their own separate missions. As relatively implausible as it may seem for seven different alien races to all be fighting over the same one backwater planet, Dark Crusade does a surprisingly good job of putting its new strategic campaign in context.

You initially choose to command the forces of any of the game's seven factions, as represented by a specific leader character marshaling each of these armies on Kronus. Among the choices are the new additions to Dark Crusade: the Empire of Tau, a high-tech conglomerate of races fighting for what they call the Greater Good; and the Necrons, an ancient and genocidal breed of what can best be described as undead robots. An enthusiastic narrator then explains what your selected race is trying to accomplish on Kronus and what your force's military leader is all about. Also, each time you manage to take out one of the opposing faction's strongholds, you'll get a narrated epilogue that's unique to that combination of races. Then there's an ending sequence for each faction for whenever you finally defeat all six of your opponents, a process that can take a good 10 hours or more, though it'll depend on the difficulty setting you choose. The stories are entertaining and faithful to the spirit of Games Workshop's influential Warhammer 40,000 sci-fi universe, and they make for a compelling reason to play through the campaign multiple times.

The campaign's turn-based layer is very simple, since you have only one army to manage and you normally just take one turn either to move to a friendly province or attack an adjacent enemy province. However, there are a lot of interesting strategic choices packed into this system, in that each province offers some sort of unique tactical reward for when you take it over. Many provinces will grant your faction's leader an honor guard, a military unit that will be ready for action as soon as you begin the next battle--as long as you have enough planetary requisition points to afford it. You can also use requisition points, which are earned each turn, to reinforce your provinces with units that can quickly defend your position should one of the enemy commanders attack.

What's more, some provinces confer unique abilities, such as a space port that lets you attack provinces that aren't adjacent to your commander. Probably the most useful of these is a special ability that lets your commander move twice per turn. Since the Necrons and the Imperial Guard start out closest to the territory containing this power, they seem to have an inherent advantage. However, part of the appeal of playing through this campaign multiple times is having to devise different strategies based on your faction's starting point and closest neighbors, not to mention your faction's inherent strengths. While the campaign map starts out the same way each time, the endgame can wind up varying a great deal depending on the choices you make along the way, especially since those enemies you choose to attack later will only be stronger by the time you get to them. Thankfully, any buildings you've constructed in a province will still be there for you if you later have to defend that province; these types of details help make Dark Crusade's strategic mode even further emphasize combat over base-building and resource management.

The best parts of the campaign are those battles in which you take on an opposing faction's stronghold. These set piece battles can be very tough even at the default difficulty setting, as you can expect heavy resistance just moments into the fight, followed by a bitter struggle against a cornered, deeply entrenched foe. The specializations and unique personalities of each of the different races are made readily apparent through these battles, and chances are you'll emerge from each one of them with newfound admiration for the opposing faction. By contrast, the standard missions in the campaign play out like skirmishes, which end abruptly when you destroy the enemy headquarters. Too bad you can never get into situations in which more than two factions are fighting over the same territory at the same time, though some of the stronghold missions do include enemies from more than one side.

As you win battles, you'll also earn unique war gear for your commander, which bolsters his strength and defenses or grants him new abilities. It's up to you to choose which war gear to take first, and while you won't win or lose whole battles based solely on this special equipment, it's a good addition to the game that makes you grow more attached to your increasingly powerful warlord. Incidentally, if your faction's leader falls in battle, you can predictably just build a new one in most cases, same as any other unit. It's a contrivance that encourages you to send your leader into battle rather than hide him in a corner of the map. Overall, the new campaign mode is well made and a big improvement on the linear campaigns offered by Dawn of War and its first expansion. It breathes new life into the single-player part of the game, thanks in part to a challenging computer opponent that effectively controls each faction and isn't easy to predict.

There's a lot to be said for the new strategic campaign, but the highlight of Dawn of War is probably the two new factions, the Tau Empire and the Necrons. One of the best-known Warhammer 40,000 species, the voracious Tyranids, are still nowhere to be found, but the relatively new Tau and Necron factions are each interesting and likable in their own right. The Necrons use a different resource model than all the other sides, in that they don't need requisition points to build new units--creating new warriors and upgrading abilities is only a matter of time, and the more strategic points you have, the less time you need to build up your army. Also, the Necrons' headquarters may slowly be upgraded to become an extremely powerful, though extremely slow, flying fortress. As for Necron units, they're slow, relentless, and hard to permanently destroy. Their vehicles aren't as imposing as some of the other races, but their lumbering infantry squads can overwhelm the opposition.

The forces of the Tau Empire seem like a cross between the Eldar and the Space Marines, with their sleek battle suits and long-range energy rifles, and the look of their units is reminiscent of anime mechs. The Tau demand you to use mixed forces more so than most of the other sides, because their troops tend to be highly specialized either for ranged combat or close combat, but not both. Once you've mustered some of the Tau's strongest weapons, it can be a real thrill to lay into the enemy with all their concentrated energy bursts. Notably, the Tau can also deploy invisible units that can safely attack while cloaked. It's something that's been done before in other RTS games, and Dark Crusade handles it about as well by making you be mindful of units or special abilities that can detect cloaked assailants. Meanwhile, returning factions in Dark Crusade each have some sort of powerful new unit and some means to detect invisible foes. The new units, like the Imperial Guard's heavy weapons teams and the Orks' flash gitz, seem powerful and useful.

As mentioned, if you don't have the original Dawn of War or the Winter Assault expansion, then you'll only be able to use the Tau and the Necrons in multiplayer matches, though you can still take on opponents playing as the other factions. Even just these two factions offer a lot of depth and intricacy, and they enhance the complexity of the game as a whole when you consider all the different match-ups possible, especially in team-based games. Though Dark Crusade doesn't use Company of Heroes' slick Relic Online service for multiplayer sessions, it's still easy enough to get into an online multiplayer match, and since there are so many different maps, factions, and victory conditions for battles, as well as an army-painter mode if you want to customize the look of your forces, there's an awful lot of lasting value in here.

Dawn of War was a fantastic real-time strategy game to begin with, but it takes an expansion pack like Dark Crusade to make the original game feel as fresh and interesting as ever two years later. It helps that the game's presentation has held up so well, between the spectacular graphics and all the thunderous weapon effects and lively unit voices, but it's all been built on a foundation of great underlying tactical gameplay. So if you like Dawn of War, best conserve your cognitive ability for the battlefield, because this one's a no-brainer. And even if you haven't played Dawn of War before, this is a great way to get into it, as well as the Warhammer 40,000 universe. 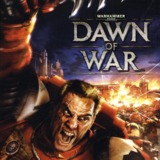