In the final analysis, suffice to say that other soccer sims do it better for the same price.

At first glance, VR Soccer '96 from Interplay looks like a decent soccer title. With some nicely done motion capture and play mechanics, this debut title from VR Sports has all the raw materials to hold its own against other soccer games. But after serious gameplay, you can't help but realize the graphics and features expected from a 32-bit sports title are lacking.

Possessing all the elements necessary for a modern sports game (polygonal characters, motion capture animation, fully rendered 3-D stadiums, high resolution graphics, stat tracking, and different camera views), VR Soccer '96 is not obviously missing anything. And VR Soccer '96 does boast some good features: 44 international teams to control (though a couple of all-star teams would have been nice); seven modes of play (including Friendly, Cup, League, Practice, Simulation, and Arcade); six different camera views; and very colorful play-by-play commentary. VR Soccer '96 also sports an extensive options menu, which can be toggled on or off, that include substitutions, free-kicks, offsides, game length, wind speed, and the like. Players will definitely take notice of the play-by-commentary in VR Soccer. Never dull, and often dead on, the announcing totally adds to the soccer experience, plus the announcer is quite funny and will cut you down at appropriate times.

But the overall problem with VR Soccer is gameplay. While the game includes six camera angles to choose from, none of them is the "right" one. You will find yourself flipping through the views, searching vainly for the one that actually allows you to play from it. The "pan camera" view is especially useless. In terms of moves, players will not find rainbow kicks, chip kicks, fakes, and different charges that are found in other soccer games. Moreover, some additional animations for the players would have been nice. Further play reveals that the AI isn't quite up to par. It's fairly easy to score against the computer, but as an offset, the computer has the ability to make some pretty outrageous shots from the corner areas. The game could also have used a multiplayer mode. Even so, you can play against the computer, against someone else, or pit two people against the computer.

In the final analysis, suffice to say that other soccer sims do it better for the same price. 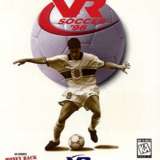