While Virtua Fighter has gotten attention in other games, such as guest characters in Dead or Alive 5 and as minigames in various Yakuza titles, the once-venerated 3D fighter seemed to be forgotten for a very long time. But with Virtua Fighter 5 once again revamped and re-released, does this star of the fighting game world still shine as brightly? Yes... but, speaking as a veteran Virtua Fighter fan, there are a few issues that keep Virtua Fighter 5 Ultimate Showdown from claiming its crown as an all-time champion.

Considered the granddaddy of 3D fighting games, Virtua Fighter sparked revolutions in visuals and gameplay and, even now, it holds a great deal of respect among fighting game fans. Its simple three-button control scheme and comparatively small character roster hides an incredibly complex and rewarding game--provided you're willing to put in the time to learn and improve at it. Some games in the series--such as the excellent Virtua Fighter 4 Evolution--are known for amazing tutorials and learning tools, along with engaging and replayable single-player modes. Virtua Fighter 5 Ultimate Showdown, however, eschews that to focus on competition, and more specifically, online competition.

Gameplay-wise, Ultimate Showdown will feel very familiar to veteran Virtua Fighter players. The base fighting engine is based around the earlier Virtua Fighter 5 Final Showdown, with all of the moves, characters, and stages carried over from that game. There are a few minuscule changes, such as different colors of hit flashes to indicate normal and counter hits, but the overwhelming majority of the gameplay is unchanged. And that's perfectly fine--VF5FS had some of the best fighting action you could find anywhere, with incredible depth of gameplay that has kept many playing for years on end. What is new, however, are the graphics and music, which have been completely redone in the Dragon Engine that Sega's RGG Studio has been using for its Yakuza series. Character models and stages have been rebuilt from the ground up, and it all shines with a visual polish that has Virtua Fighter looking better than ever.

As previously mentioned, the meat of Virtua Fighter 5 Ultimate Showdown is undoubtedly in its versus play. The game heavily pushes competition as its main thrust, even going so far as to show you highlights of various matches on the mode selection screen. Currently, the game offers a random-matchmaking ranked mode where you compete with other players online, along with public and private lobbies where you can fight with a group of players, spectate matches, and even set up specialized tournament rooms in formats like single- and double-elimination, and round-robin style. The wealth of options and formats available is great, though there are some utterly baffling oversights, such as the inability to invite folks from your PSN friends list directly into a created room. (They just have to keep refreshing the room list until they find you.)

However, the big focus on competitive matchmaking in the game means that it’s been heavily prioritized over single-player modes. For solo play, you simply have a basic arcade mode where you fight a lineup of CPU opponents and a training mode. Arcade mode is very straightforward, while training mode manages to give a solid overview of the game's systems through tutorials and provides many useful tools and overlay for players looking to practice specifics. It's not as amazingly comprehensive as Virtua Fighter 4 Evolution's phenomenal training and tutorial mode, but it gets the job done. While it's possible that more single-player content could be added down the line in future updates, as of this writing, that's all the game offers. Those hoping for a story mode, or some form of variety, will likely be disappointed--while many fighting games' story modes aren't terribly interesting, it's still nice to have them to give players nervous about wading into the competitive pool a chance to dip their toes into the game.

With such a heavy focus on multiplayer and online--and strict, timing-based gameplay that matters down to single frames--Virtua Fighter 5 Ultimate Showdown requires some heavy-duty netcode to carry the weight. The current popular solution to fighting game latency is "rollback" netcode, as seen in games like Mortal Kombat 11 and Guilty Gear Strive. Virtua Fighter 5 Ultimate Showdown opts for a custom solution which Sega has not detailed the workings of. While the netcode, in general, is better than average, it still delivers a mixed experience overall.

I tested online play through a PlayStation 5 hooked up to the internet via an ethernet cable. Connections from my home in Portland, Oregon to locations in the Mountain time zone, northwest Canada, and the Midwest to others with similar setups (including wired PS4s) felt solid overall. Only when I got as far as New York City did play start to feel dicey, as techniques with long executions felt a little stuttery.

In random ranked matches, however, things didn't fare as well. I would get strong, four-bar connections that would still stutter and lag, likely due to the other player using a Wi-Fi connection. (There's no Wi-Fi player indicator, which is a big oversight). However, I would also have some excellent connections with players from Japan. The quality of the connection you get seems to depend greatly on the setup you and your opponent are using along with the closeness to a relay server, which the netcode can only do so much to compensate for. Considering the large disparity in the quality of internet connections across North America, we can't reasonably expect every potential player to have the ideal setup. Rollback could have helped compensate a bit more for this, but unfortunately, for the time being we're stuck with netcode that's serviceable but cracks under pressure.

Considering the overall quality of Virtua Fighter 5 Ultimate Showdown's combat it's easy to recommend giving it a shot if you're curious. If you can handle some iffy random connections and a dearth of single-player content, you will find an immensely satisfying fighting game experience that only gets better the more time you invest in it. However, I can't help but feel like a little more time to cook would have benefitted this release. Sega wants this game to be an ongoing thing, so updates are likely to add features, customization items, game adjustments, and gameplay modes. For right now, though, Virtua Fighter 5 Ultimate Showdown remains a good--if flawed--return to the spotlight for one of gaming's greatest fighters. 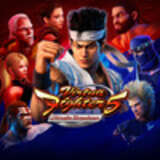 Heidi is a 28-year veteran of the Virtua Fighter series. She has played literally every Virtua Fighter game in existence. Yes, even the Japan-only ones. She is open to playing folks with her Vanessa, but only if you're not on Wi-Fi.